Oil and gas producers face no shortage of complex challenges. To remain competitive in times of low oil prices, the industry’s focus on cost reductions intensifies only to then shift to cost management when the price per barrel of crude ticks upward. Maximizing production from existing fields is one of many levers pulled in the quest to remain competitive. Low prices or high, every additional barrel pumped provides much needed cash flow. Of the many tools available to enhance production returns, Flotek Industries offers a chemical blend called Complex nano-Fluid (CnF) that is making an impact in new wells and old.

“The CnF technology is a patented combination of solvent and surfactant. It is multidimensional in that it can be used in the applications across the entire life cycle of the well,” said James Silas, senior vice president of research and innovation for Flotek.

The technology helps with fluid mobility and increases productivity between the reservoir and the wellbore, helps reduce capillary pressure and more. It is built and designed to address different challenges within different reservoirs.

“We partnered with our clients over the years to solve what we think is almost every possible challenge, whether it’s to enhance production earlier on a new well completion, or to extend the life and improve later year production on secondary recovery,” said Flotek’s CEO John Chisholm.

Rather than recommend ways to enhance production, the company uses a prescriptive chemistry approach, Chisholm noted.

“We use information provided by the client, like drill cuttings, oil and water samples, and more, to prescribe what the proper approach would be to improve production,” he said. “It is like going to the doctor, answering their questions and giving blood samples so that the proper course of treatment for you is prescribed.”

It is not an apple but an orange that helps keep the doctor away, as a primary component of the CnF blend is d-limonene, a major constituent in citrus oils. For more than a decade, CnF technologies and the prescriptive chemistry process has been used in thousands of wells all over the world, according to Chisholm.

The first step in determining the best approach is conducting a geological reservoir analysis, according to Silas. “We have basin studies on all the active areas currently within North America and around the world that we use to help us identify what the baseline challenges could be within an area,” he said. “Then we work with the client to narrow down that universe of challenges to what, specifically, they are going to encounter within their application.”

Based on this internal analysis, Step 2 is design of the entire fluid system that should be used to optimize production from that specific reservoir by the company.

“Whether that’s identifying the types of clay and clay control that would be needed or the exact type of Complex nano-Fluid technology that would be most effective within their reservoir, or whether there’s particular production challenges that could be coming from the oil (i.e., paraffins or asphaltenes), these different components of the oil can cause production challenges that can be addressed within the original fracture stimulation,” he said.

Step 3 in the process is to deliver and monitor quality during onsite chemical delivery.

“When we’re looking at the entire fluid system that we want to apply, we’ll actually extend beyond just the Complex nano-Fluid itself and prescribe every chemical component within that fluid system, including clay and scale controls, biocides and more,” Silas said. “We have generally seen that the combination of Complex nano-Fluid with those other chemistries helps them all to work better.”

It is this multidimensional aspect of the technology, its ability to not only deliver the solvent and surfactant but also the other necessary chemistries to the reservoir surface, that helps ensure reservoir improvement, he added.

The amount of time needed for an improvement in production to be realized depends on the application.

“In cases where we’re looking at including [the technology] within an initial fracture stimulation, then it’ll be weeks during the completion that it will be in contact with the reservoir,” Silas said. “Then during flowback, it’ll essentially have been in contact with the reservoir for months at that point. In a remediation, it’s going to be a short time period, maybe a 24-hour soak or 48-hour soak, where we normally see that application.”

An example of this successful prescriptive approach involved an operator with acreage in the Woodford play in Grady County, Okla., that was experiencing negative effects of fracture treatments from nearby offset wells (fracture hits). In addition, production was lower than expected based on predrill estimates. Production challenges are pervasive in the Woodford intervals where clay content, structure and natural fracture density impact well and completion design. Additionally, reservoir pressure is variable across the Woodford in this county, according to the URTeC- 2902400 paper. Flotek partnered with the operator to perform a pilot analysis to determine how to reverse the negative effects and improve production. 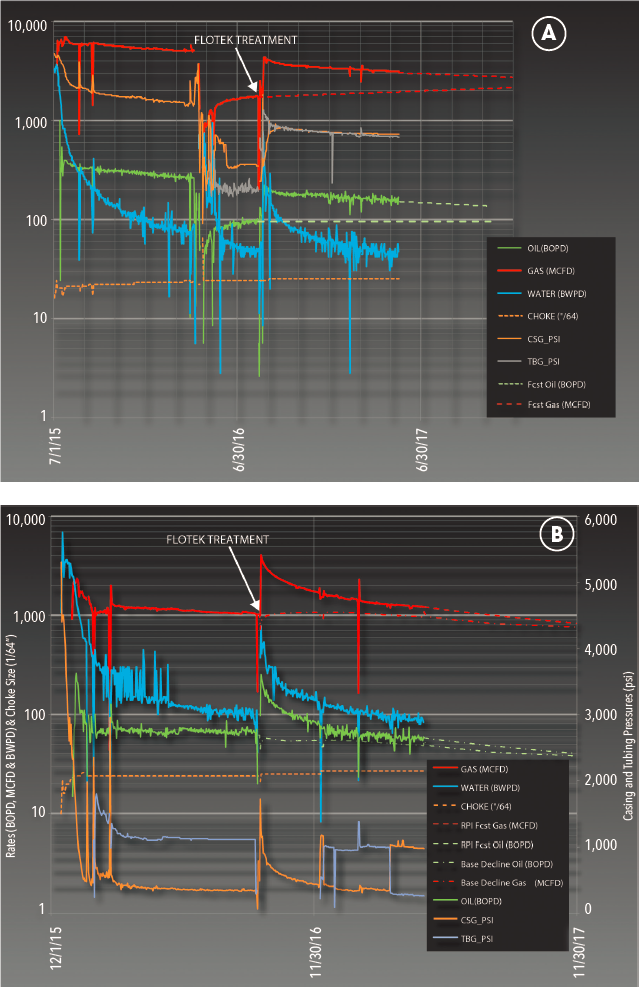 These four wells were treated with a customized mix of CnF, hydrofluoric acid, hydrochloric acid and ammonium chloride. The treatment delivered positive results, with increased production realized in each well. Production was restored to prefracture hit rates in one well and resulted in a fourfold increase in preremediation production rates in another.