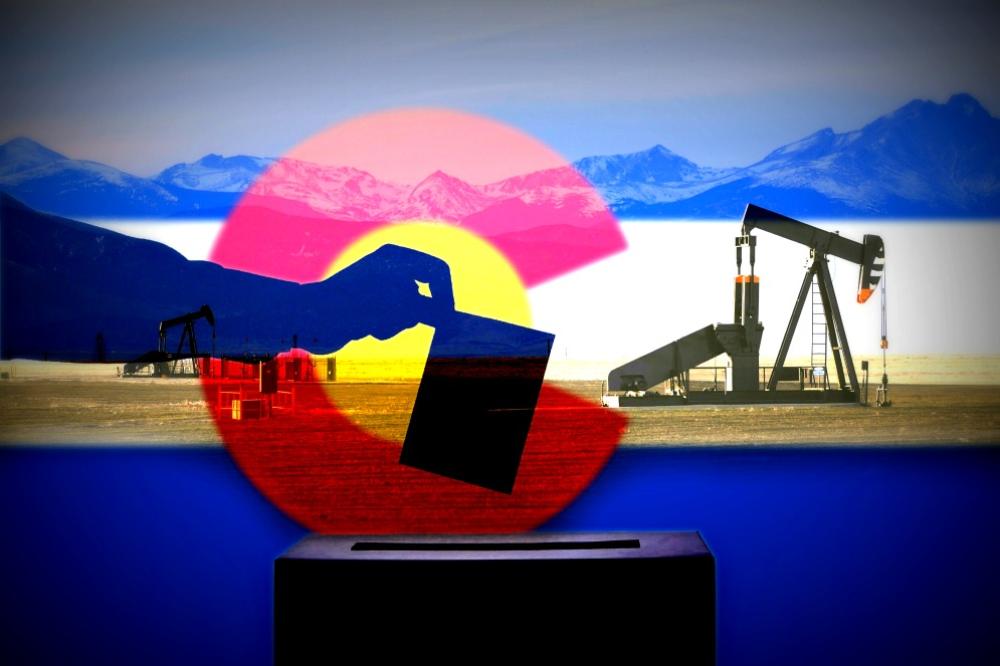 Opposition groups said passage of Proposition 112 would effectively ban oil and gas drilling in Colorado, costing the state tens of thousands of jobs and billions in revenue. (Source: Hart Energy/Shutterstock.com)

A contentious statewide ballot item in Colorado proposing to extend the oil and gas setback requirement to 2,500 ft has met with severe opposition from energy producers and other businesses in Colorado because it would nearly halt hydraulic fracturing in the state.

Colorado voters will decide on Nov. 6 whether to approve Proposition 112, which is a measure known during the petition process as Initiative 97 that calls for increasing the current setback requirement of 500 ft by five-fold. Opposition groups such as the Western Energy Alliance and Vital for Colorado, a state business coalition focused on energy policy, and industry analysts said passage of the proposition would effectively ban drilling in the state, costing tens of thousands of jobs and billions in revenue.

“Colorado stocks continue to get pounded,” said Ethan Bellamy, a managing director who covers energy stocks for Baird, a Milwaukee-based investment bank. “Proposition 112 is a widow-maker for the D-J Basin.”

The passage of the proposition would call for moving the current 500-ft limit to 2,500 ft and would “thrust a dagger into the heart of Colorado’s oil industry,” he said. “It’s a backdoor ban on fracking paid for primarily by drilling opponents in Boulder County and by out of state national environmental organizations such as Food & Water Watch.”

The setbacks are significant both locally and nationally because moving the limit too much “creates an arbitrary ban above ground and you’ve effectively taken a private asset away from the mineral owner,” including farmers, ranchers and other property owners, Bellamy said.

“Neighbors would like to see greater distances between industrial activity and for example, schools,” he said. “No one should be drilling and fracking a well 500 feet from a school.”

Setbacks are a national issue because they seek to ban acreage from any type of drilling.

“The ultimate aim of national groups is to eliminate the hydrocarbon industry altogether and this is just one of the many chinks in the armor they’re going after,” Bellamy said.

One problem with the way Proposition 112 is written is that “vulnerable areas” and a seemingly innocuous and reasonable 2,500-ft setback would combine to ban most of the state from being drilled, he said.

The effect on Colorado would be a “cataclysmic problem” since the state relies on oil and gas tax revenue to balance the budget, Bellamy said.

“The knock-on effect of reduced economic activity would cause a crushing blow to thousands of oil and gas employees, ancillary businesses and royalty owners,” he said.

Producers are already preparing and some are accelerating their permitting efforts aimed at preserving as much of their inventory as possible if the proposition fails.

“That would not be a guarantee of production though as midstream companies would be reluctant to invest in more above ground infrastructure with a finite production life,” Bellamy said.

The effects of the proposition being approved by voters would be far reaching because it could potentially forego 500,000 barrels per day (bbl/d) of production, he said.

“Not only is that enormous for Colorado, but it’s enough production to meaningfully impact global supply and demand balances at the margin,” Bellamy said.

In a worst-case scenario, the high oil price production for Colorado is 800,000 bbl/d. The expectation for long-term production if Proposition 112 passes is 250,000 bbl/d, he said.

“That’s a variance of 550,000 bbl/d of oil production, which equates to $38.5 million in revenue per day at $70 oil or $14 billion per year in lost revenue that pays midstreamers, service companies, royalty owners, operators and ultimately, investors,” Bellamy said.

The most drastic impact would be on the high-value horizontal oil production in Weld County, Colo., which is where most of the lucrative Denver-Julesburg (D-J) Basin lies. Other counties are likely to be impacted as well as capital will move from Colorado to other states such as Texas, Oklahoma and Wyoming, he said.

There is a 50% chance the proposition could pass and the effects would be “devastating to the economy of Colorado,” said John Harpole, president of Mercator Energy, a Denver-based natural gas broker in the Rockies.

“It would essentially eliminate 85% of the non-federal land drillable locations in Colorado,” he said. “This would do more economic damage to the state than most people can even comprehend. It is simply a drilling ban, not a setback.”

The regulations and laws that have been enacted during the past 110 years between landowners, mineral owners and producers is not “something that should be cast aside by an initiative that is not fully understood by voters,” Harpole said.

Both Anadarko Petroleum and Noble Energy could have their net asset value dip by 15% and 19%, respectively, wrote Devin McDermott, an equity analyst for Morgan Stanley.

“We maintain our even weight (EW) rating on both companies and expect uncertainty to persist at least until the vote on Nov. 6,” McDermott wrote.

“When it comes to midstream companies, Western Gas Partners and DCP Midstream are watching this regulatory risk closely,” he said. “Other companies could also be impacted by the ruling as Williams (NYSE: WMB) recently purchased the Discovery System in the area and there are many gas, oil and NGL pipelines that would also be affected.”

Based on data from Aug. 22, 31 rigs are active in the D-J Basin, including 12 connected to DCP Midstream’s assets system and 13 connected to Western’s D-J footprint, Carlson said.

“While this would significantly cut production growth for basically all producers in the state, pure-play Denver-Julesburg producers like Extraction, Highpoint and SRC would be hit the hardest,” he said.

Producers like Anadarko, PDC Energy and Noble would be able to mitigate passage of the proposition by focusing on their other assets in other basins like the Permian, Gulf of Mexico and the Eagle Ford Shale.

Pure-play producers who produce solely in the D-J Basin would be limited in options such as exploring to explore acreage in unfamiliar territories or halt basically all new drilling, Carlson said.

Approval of the proposition would be ruinous for the state and eliminate 85% of the state’s land from any oil and natural gas development, said Kathleen Sgamma, president of the Western Energy Alliance.

“It’s in effect a ban on oil and natural gas development,” she said.

“The latest ballot initiative is really about shutting down the industry in eliminate Colorado,” Sgamma said. “We are optimistic that this would not pass in November, but we are not taking it for granted.”

A ban on drilling for oil and gas would be alarming for the state. The Common Sense Policy Roundtable, a non-profit free-enterprise think tank analyzing Colorado’s economy, said that 43,000 jobs will be lost in the first year and 147,800 jobs by 2030 along with a loss of $230.8 million revenue in the first year and $1 billion by 2020. Currently, 82% of oil and gas revenue is allocated to the communities where the production occurs.

Many politicians have expressed their concern and opposition to the proposition, including Gov. John Hickenlooper, a Democrat and both gubernatorial candidates, Congressman Jared Polis (D) and State Treasurer Walker Stapleton (R).

Simon Lomax, a research fellow with Vital for Colorado, a state business coalition focused on energy policy, formed in 2013, said there are 30 civic and business groups who have joined to oppose the proposition. He is confident it will be defeated like the anti-oil and gas ballot measures in 2014 and 2016.

“I think it’s very likely to fail because there is a huge bipartisan coalition to defeat Proposition 112,” he said. “It is a threat to the Colorado economy, businesses and household budgets. The economic consequence of the impact are so great and extreme it makes this measure so beatable.”