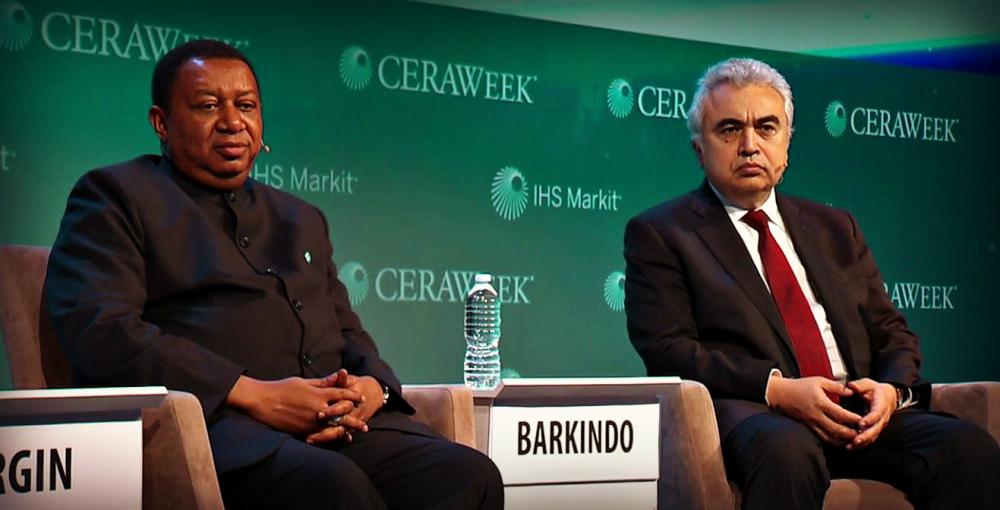 (From L to R) OPEC's Mohammad Barkindo and IEA's Fatih Birol at CERAWeek 2017 in Houston. (Source: CERAWeek by IHS Markit)

HOUSTON—During the nearly two years since oil prices first nosedived there have been a lot of accusations of price wars between the U.S. shale industry and OPEC thrown around.

At CERAWeek by IHS Markit on March 7, OPEC Secretary General Mohammad Barkindo decided to clear the air: “For the record, we didn’t have any war.”

Instead, Barkindo said he and OPEC viewed the U.S. shale revolution as a welcomed relief due to lost production at the time from Libya, Iran and Nigeria—his home country. Without U.S. shale, he said the global economy probably would’ve faced a “deep crisis.”

“We only wish that [the U.S. shale revolution] was done in an orderly fashion without triggering this severe cycle that we are still battling to come out of it,” he added.

In December, Barkindo spearheaded an agreement between OPEC and non-OPEC producers to cut oil output by 1.8 million barrels per day (MMbbl/d) in hopes to accelerate a market rebalancing.

Commitment to the deal started strong with the International Energy Agency (IEA) reporting record initial compliance of 90% in January.

Barkindo said so far compliance remains high and that the February production numbers promise to be “much higher than January conformity.”

OPEC will meet again to discuss the possibility of extending the agreements in May.

“By May 25, I believe we’re going to look at how far we’ve gone in achieving that objective of accelerating the drawdown of stocks to bring it to the five-year average, which in itself is a moving object—it’s not static—and that would determine how we should move forward,” Barkindo said.

So far, their efforts seem to have paid off—currently, in 2017, both Brent and West Texas Intermediate crude benchmarks have remained above the $50 per barrel mark.

Fatih Birol, IEA executive director, said there is room for everybody in the oil industry—U.S. shale, Canadian oil sands, offshore producers and the Middle East.

“Now, this is a new dynamic and we have to find a place for everybody here. In the French politics there’s an expression, which can be used here—cohabitation,” Birol said

However, the industry could still be facing further challenges following two to three years of shrinking investments.

The concern is that production won’t keep up as upstream investment continues to decline. Even with a “second wave” of U.S. shale oil growth bumping production by 1.4 MMbbl/d, another round of price volatility could be on the horizon, Birol said.

Contrary to some in the industry, the IEA doesn’t foresee a peak oil demand.

“With the current policies, we at the IEA don’t see a demand as peaking,” Birol said. “With the decline in the existing fields, our message to the oil industry here in Houston is invest, invest and invest.”