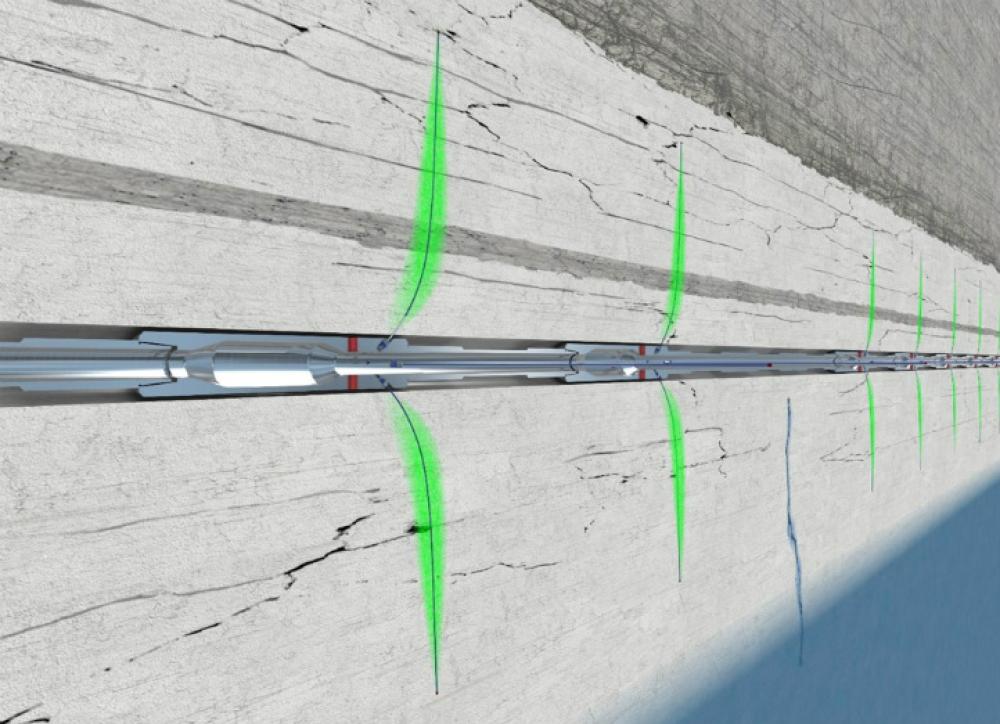 The laterals are drilled utilizing small-diameter tubes with drillbits and turbines, which are conveyed into the well as integral parts of an openhole liner. (Source: Fishbones)

Getting the most out of a reservoir has always been a top priority for producers, but in the downtimes this is more important than ever.

Norwegian minnow Fishbones has developed an innovative technology for stimulating wells by drilling a large number of laterals from the main wellbore into the reservoir, helping to increase productivity rates.

The company’s multilateral stimulation technology (MST) is an openhole liner completion that connects the well and the reservoir without the need for hydraulic fracturing.

Small-diameter tubes (needles) containing turbines and drillbits are installed with and protected by the liner. At depth the needles are released by pressuring up the liner, and the jetting operation starts. Fluid flows through the needles and jets out through the nozzles.

The needles are ejected due to the differential pressure across the liner.

The laterals are drilled when drilling fluid is circulated. This turns the turbines in the small-diameter tubes, which drives the bits into the formation creating the laterals.

Fishbones’ MST can be used with acid for jetting of carbonates or with nonreactive fluids for other formations.

Fishbones said the technology helps avoid water or unwanted gas by predictable penetration and location of the laterals.

It also helps to speed up drilling by removing cementing, perforating, cleanouts, running frack strings and other operations. Logistics are simplified by using rig pumps and significantly less fluids.

Eirik Renli, CEO of Fishbones, told E&P, “We can carry out the operation very accurately in that we know exactly at what depth we are stimulating the well. It is efficient because we are using a lot less resources than many alternatives.

“We have done two successful pilot wells in the U.S. over the past couple of years, and we are planning a third well. We had originally planned five, but it seems we will stop at three. The third pilot will probably be done in the Middle East, but it is not yet decided. There is a lot of interest from the Middle East at the moment because activity levels are still very high there.”

Fishbones has contracts for the technology in place with Petrochina, Lundin, Abu Dhabi Marine Operating Co. and Saudi Aramco. Renli added, “We have reached a technology approval with Pemex, and we are still negotiating a contract.”

Fishbones technology has been developed through a joint industry project, which includes Fishbones, Statoil, Eni Norge and Innovation Norway. The project also was supported by the Research Council of Norway.

Statoil already has trialed the technology on its Smørbukk South Extension project off Norway, where 150 fishbones were successfully drilled from the Deepsea Bergen.

The multilateral well was delivered well below estimated time and cost.

In 2019, producers across the Permian Basin flared and vented 293 Bcf of gas but flaring has declined as producers implement emissions reduction measures.

The recent working interest divestitures and royalty acquisitions are expected to have a neutral effect on overall production during 2022, says PHX Minerals in a company release.