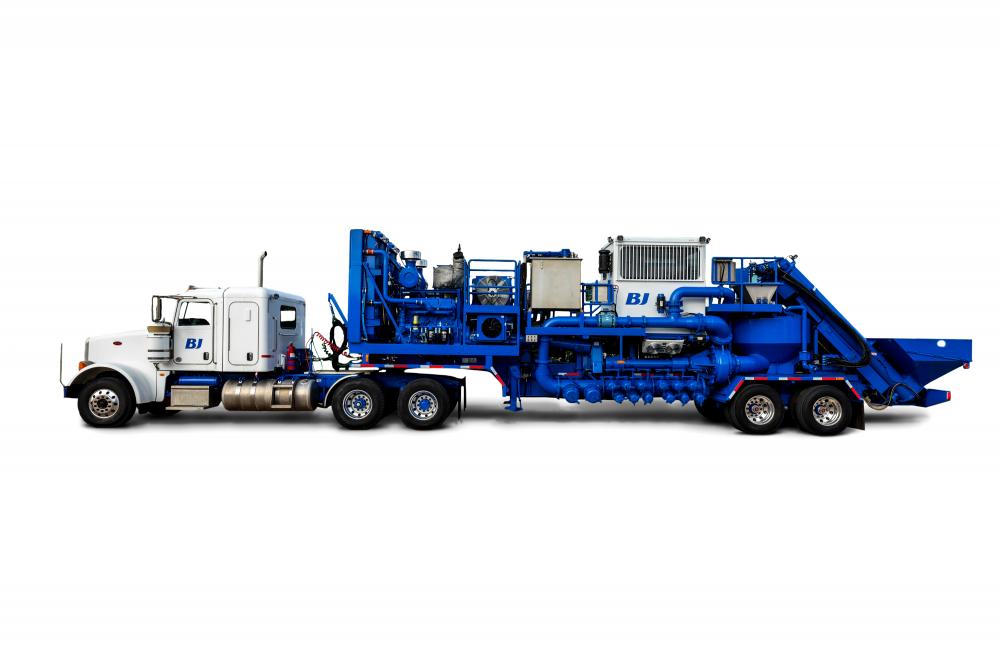 Market conditions in 2017 demanded solutions to the challenges that arose from increased completions intensity and longer lateral wells. There became a demand for higher flow rates and treating pressures as well as higher proppant volume throughput, ultimately leading to longer pumping times and continuous 24-hour operations. In the last five years, according to Spears & Associates, the average proppant per well has increased more than 140% and is estimated to reach 15 MMlb per well by 2020 given the current trend. During this period of rising service intensity, the Occupational Safety and Health Administration also increased safety requirements around silica dust exposure.

Given the increasing demand being placed on equipment, BJ Services’ engineering team analyzed the entire fracturing pumping system. The team looked at each unit in the fracturing spread and identified the blender as one of the critical components of the fracturing process and a prime selection for redesign to improve operational efficiency. The original industry blender designs were not very conducive to the longer, ever-evolving lateral wells, and designs had not been updated to accommodate higher proppant volumes. At the time, the industry norm for average blender maintenance was 50 MMlb, which was set in a market dominated by smaller vertical wells that ranged from one to three stages.

The required planned and unplanned maintenance created by the increased demand led to an increase of nonproductive time (NPT) of close to 100%. This downtime was exacerbated by original industry blender designs requiring the equipment to be taken offsite and brought back to the maintenance shop for repair. These blender designs were not easily maintainable, as they typically had long spools of custom fit pipe that required maintenance away from the well site, and center-mounted discharge pumps that were slow and difficult to change out. A standard radiator package could not accommodate winter and summer temperatures without overheating, especially in high silica dust environments.

A new approach
These challenges led the BJ Services team to re-engineer the blender with a focus on maintainability and reliability. The team, with direct input from BJ Services’ field maintenance and operations teams, analyzed every component of the blender from the inside out to determine how to achieve maximum uptime.

The team started at the front of the blender with the radiator design. The radiator core fins were redesigned, and the layout was reconfigured to prevent fouling and allow ease of cleaning. By preventing the likelihood of fouling, the redesign of the fins also improved the reliability of the cooling system. Since the first unit deployed in August 2017, the redesigned radiator has successfully operated in ambient temperatures from -40 C to 43 C (-40 F to 110 F) with no overheating or overcooling issues.

Next, BJ Services’ engineers analyzed the piping design. After considering field trial results and advancements made in adjacent industries, the team selected a modular piping design to allow for fast replacement in the field as well as suction and discharge manifolds with interchangeable parts. This allowed maintenance to be completed on site and the piping to be interchangeable to accommodate common hose sizes. The simplified design also reduced the wear and erosion, which was common due to the complex bends and custom piping joints. Historically, field repairs to piping were quick welds, prone to repeated failure. The modular design solves this issue by swapping out the entire spool of piping with readily available parts.

The discharge pump presented the team with another opportunity to increase both the maintainability and reliability of the blender. Higher proppant volumes and higher pumping rates created system stress, which led to discharge pump failures and significant NPT. By redesigning the blender to include pressure control, engineers eliminated the common issue of overspinning—operating the pumps outside of its optimal efficiency range—which caused premature pump failure.

The redesigned blender also includes a side-mounted discharge pump rather than one mounted between the trailers, as with most industry blenders, which greatly increased accessibility in the field. When coupled with the modular piping design, blender downtime while swapping pumps was reduced by about 75%.

Another way the team reduced system stress was to develop a proppant distributing chute to reduce air entrainment in the fluid. The reduction of air allowed a more continuous fluid flow and less air ingestion into the pump resulting in less wear. In addition, less air ingestion into the pump results in less wear and damage of the downstream equipment.

As part of the analysis, the engineers identified multiple failure points in the drive train. The team upgraded the blender from a pneumatically actuated clutch to a hydraulically actuated clutch. Reliability and maintainability are increased with the hydraulic clutch by reducing leaks and making any leaks that do occur easily identifiable. The drive train also was upgraded to have a direct drive single gear reduction design and higher horsepower to meet market demands. The simplified clutch is more efficient than a traditional transmission and leads to more available power at the discharge pump.

Safety improvements
In addition to focusing on increasing reliability and maintainability, the redesign provided the team with an opportunity to improve the safety profile of the blender.

In an industry with constantly evolving demands and technology, this blender was successfully re-engineered to provide reliability and increased maintainability. The result of the engineering upgrades was a system that, after 18 months in the field, provided a 75% reduction in time to repair, a 66% reduction in NPT and a 150% increase in pump life. The redesigned blender is a case study on how companies can meet market challenges by looking at all components of a system and simplifying how they work together.