Entrée to the industry: Entered the industry as the Director of Business Development at Energy Corporation of America, where he successfully closed over $425 million in transactions. Previously employed at the Department of Defense and the White House in several capacities including —Co-lead for Special Operations on the Defense Transition Team, Deputy Chief of Staff to the Deputy Secretary of Defense and other roles including the head of the Veterans and Wounded Warrior Office.

On leadership: Draws on lessons learned while in the U.S. Navy for his leadership at Concord; values humility and respect. “In the military, leaders have to empower those around them to be successful. A big part of my job is making sure our team has the tools and direction necessary to thrive.”

By any other name: Broad-minded in his move to the private sector. Unsure of how it would go, “grateful for every milestone I’ve reached so far. That said, titles don’t mean much in our organization. We have to deliver results to our partners.”

Family matters: Fatherhood opened his eyes to what really matters. “Before we had our boys, I probably lacked some perspective on what was truly important and may have focused too much on work over all else.” Remains ambitious, but his family helps him “step back and prioritize.”

Self-sustaining: Spent early part of his career “in places where the U.S. was historically dependent on oil; so, I’m proud to be part of an industry that is driving toward U.S. energy independence.” 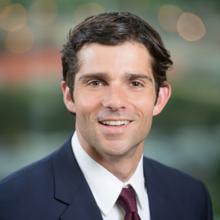