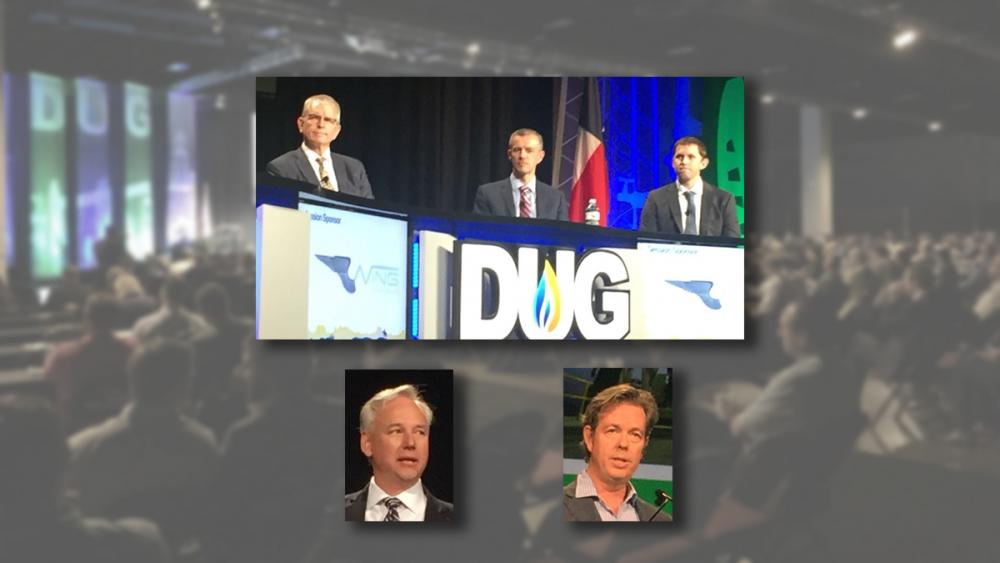 DUG Permian Basin’s Technology Program takes place throughout the day. To follow speakers and to read what industry insiders are saying about the Permian, check back or follow @HartEnergConf on Twitter.

Fisher spoke during the conference’s inaugural DUG Technology Program on May 23.

“Even when it’s a regional mine, there’s a lot involved from a logistics standpoint,” he said, adding that the way to bring order from the chaos was to focus on technological innovations.

The water sourcing, treatment and reuse panel featured this bold declaration from J. Michael Anderson, senior vice president and CFO of Layne Water Midstream (NASDAQ: LAYN): “We are in the advent of the water midstream era.”

The water segment of midstream is growing rapidly to encompass sourced, produced and recycled water to enable solutions that make economic sense, Anderson said. Incorporating the use of large-scale pipelines will also provide the benefit of reducing the number of trucks on the road.

Jim Summers, CEO of H2O Midstream LLC, emphasized the “tremendous opportunity [and need] for infrastructure around water” but asked a big question: Who going to pay for and build it?

His answer was that producers, affiliates and third-party companies who need water the most are the most likely candidates to build water infrastructure.

The second day of the conference began with discussions about frac sand and how the basin’s takeaway constraints could squeeze growth in that area.

“If you can’t get the oil out it’s going to affect sand growth,” warned Taylor Robinson, president of Chicago-based PLG Consulting, who spoke during the morning logistics panel session. Sand growth will need to throttle back if crude oil production growth creates bottlenecks in the transport system.

The Permian will add six to eight sand mines to ramp production in 2018, Robinson said. “There will be a tipping point later this year into next year.”

He also identified three megatrends in the industry:

In the opening on sand development, Rhett Bennett, founder and CEO of Fort Worth-based Black Mountain Sand, emphasized the growth theme as well. His company’s output has grown to an exit rate of 7.9 million tons per year, translating to a 36% market share. Bennett expects that share to grow.

Also on the panel was Laura Fulton, CFO of Houston-based Hi-Crush Proppants LLC (NYSE: HCLP), who said her company believes that 25 million to 30 million tons of in-basin Permian sand will be available to the market by year-end 2018.

Location is critical to economic viability. Panel member Hunter Wallace, COO of Atlas Sand Co., estimated that transportation accounts for 60% to 80% of the cost of Permian sand consumption. The shift to Permian sand mining, he said, is well underway.