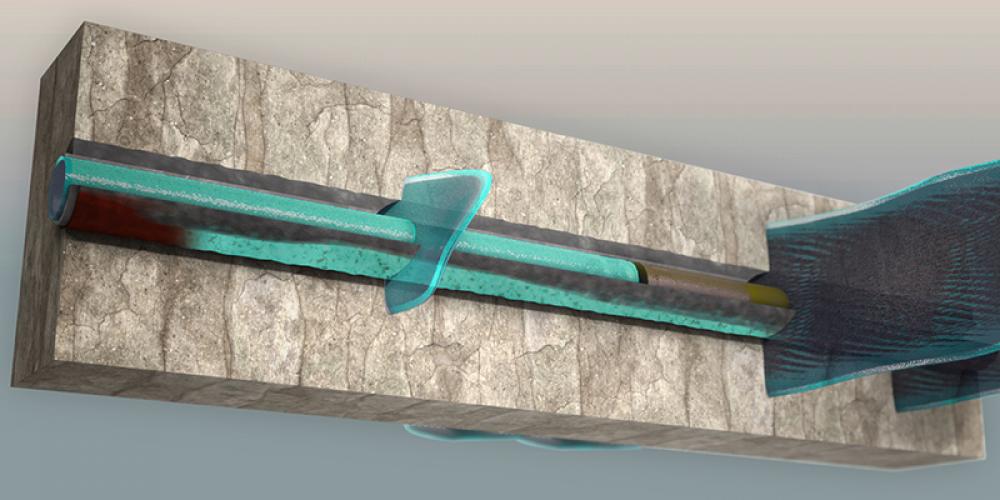 Caption: If your cement job bonds poorly and leaves channels behind the casing, your fracturing fluid can seep into the wrong zone. (Courtesy of Schlumberger)

Solve one of the mysteries of poor well productivity
When your unconventional well doesn’t deliver the production you expect, you might suspect the problem is fracturing fluid selection, sand volume, pumping rates, or reservoir quality—but the real issue may lurk behind the casing.

One benefit of plug-and-perf completions in cased and cemented wells is improved control over fracture initiation, ostensibly at or near the perforations. In long horizontal wells, however, inadequate centralization and hole cleaning during cementing can leave mud channels that carry fracturing fluid far away from the intended reservoir interval. As a result:

Case study: Permian operator finds clues behind the casing
Cement bond logs can help you determine whether poor cementing and channeling are problems in your well and guide you to a better cement-to-frac solution. Logging helped a Permian Basin operator discover that conventional cementing was delivering bond indexes (BIs) in the range of 0.5 to 0.6, despite following industry best practices to remove the diesel-based drilling mud from the 10,000-ft horizontal laterals.

To optimize the cement isolation for fracturing, Schlumberger recommended using the CemFIT Shield* mud-sealing cement system, which enhances zonal isolation by interacting with leftover nonaqueous fluid (NAF) to reduce fluid mobility and reduces the risks that fracturing fluid will flow out of zone.

After using the CemFIT Shield system in four new horizontal wells, the operator ran cement bond logs and calculated an average BI of 0.56 for two nearby conventionally cemented wells and 0.87 for the wells cemented with the new system—a 55% improvement in bonding. In addition, preliminary evaluation of microseismic data from subsequent fracture stimulation treatments indicated that fracture lengths in one well cemented with the CemFIT Shield system were as much as 44% longer compared with fracture lengths in a neighboring, conventionally cemented well.

To learn more about this system, view the CemFIT Shield system video.
*Mark of Schlumberger