At 37, Laura Freeman has already accomplished a lot in the energy industry. Originally set to study physics, she switched to the oil and gas business in school because it was a more enticing industry to be part of, and she was “drawn to the action.” Now, her startup Vencer Energy is on the path to rapid growth and prosperity.

“I’m very proud of myself and the entire Vencer team for how fast we were able to spin up from nothing to a billion-dollar company in a very short time with the 2021 Hunt Permian acquisition,” she said. “We went from three employees and a handful of contractors, including myself at the time, to about 30 Houston personnel and 30 in Midland basically within 60 days.”

Raised in Colorado but located in Houston, Freeman serves as vice president, business development and engineering with Vencer Energy. She lives with her three dogs: Butch Cassidy, the Sundance Kid and Maggie.

Drawn into the industry

“I actually read a Red Adair book while doing a physics degree in Portland and thought that sounds a lot more fun! At the time, it was also one of the most lucrative jobs for new graduates as well. As I got further into it, I continued to be drawn to the fast pace, complex problems and exposure to so many things in the A&D space—reserves, operations, economics, business, negotiation, etc. It’s the perfect fit for me.”

“I’m proud of my team’s accomplishments on my very first asset. I showed up fresh out of petroleum engineering grad school, and the first thing I was told is ‘you’re the reservoir engineer for Mt. Poso.’ I was honestly thinking, great, but what is a reservoir engineer?

We did a successful targeted horizontal drilling program in thin sands overlying a steamflood and then implemented a waterflood. In less than a year, the field had gone from an undesired asset that came along with a larger package to the highest rate of return project in all of California for Oxy.

I’ve had a lot of great experiences and accomplishments. One other that comes to mind is a lawsuit around 2014. A group had set up a private placement and illegally solicited investors into a terrible deal. They had a very advanced screening method and would target specific people and use very manipulative approaches to get them in. They had taken advantage of many people and our client was one who wanted to shut them down and had enough money to take it to court. He was an older gentleman from Albuquerque who had come from nothing and built a large, successful business. The PPMs (private placement memorandums) were intentionally very complex with turnkey drilling, odd fraction of working interest and revenue interest, etc. The scammers were also very smart. I spent months untangling the data and financial documents and FINRA and SEC rules and working with a great attorney. It was a tough case, and we won. I was very happy to get it right for the good guys in that one, especially the older gentleman.”

“My current company is a startup, albeit a large one! The executives have all exercised leadership with successful take down and integration of the Hunt Permian assets and successful spin up of Vencer in a short time. For me, doing what needed to be done to successfully bring on the asset was a major contribution. I was leading IT, software, systems integration, accounting and various other components of getting to where we could close and successfully take over operations. My extra horsepower and dedication to the goal helped greatly in getting the asset integrated very quickly by industry standards. For me, that allows us to go back out and look at additional billion-dollar-plus acquisitions during a very interesting (and possibly short-lived) window that has opened up in the deal market.

I pay attention to situations and people and learn the most when things go wrong. Constantly looking at myself and challenging my comfort zone has been the main way I’ve developed over the years.”

“Young people have energy and creative thought processes that pair really well with experienced folks. They typically are more adaptable to new technology and excited about making things better, not just surviving. The optimism and energy are major positives. I also think they have a unique view of the industry having seen hard times for a lot of their careers (2008, 2014 and 2020-2021). Younger people also often have more progressive views on things like ESG and diversity, which can be an asset these days. I often see more problem solving and creative solutions from younger industry members, which ties back to their energy and optimism.

There is no place for ‘because we’ve always done it that way.’ Sometimes there are things that work well and sometimes they don’t. Being ingrained in business practices, thought processes and behavior often lead to failure to adapt and ultimately business failures.

As the Einstein quote goes, ‘Once you stop learning, you start dying.’ I think that’s actually more true for businesses than people.”

“Realize that life and your career are fluid. There will be ups and downs, difficult periods for extended amounts of time, time to hustle and time to wait. The more you can develop your thinking to see multiple sides of a situation and to accept contradictions, the better off you’ll be. Also learn to work in ambiguous situations. Don’t be afraid to start or try something when you have limited instructions or data. Take a shot and get feedback early. Think about the psychological aspect of work and counterparties. Do you want to be right or do you want to get something done? How can you leverage the way people think and behave to accomplish your goals?”

1. My love of dirtbikes is always a surprise to those who don’t know about that. I’m also a big elk hunter and go every year on public land in Colorado.

2. I have done several international business trips with UCLA Anderson where I got my MBA, including Peru, China, Israel, Vietnam and Greece. I’ve also visited Norway, love the Canadian Rockies, used to go to Mexico deepsea fishing every year and got my youngest Rhodesian Ridgeback in Scotland.

3. I started my education with a physics degree in Portland, Oregon, and did a lot of ice and alpine climbing. I’m even an author on the Mt. Hood guidebook! 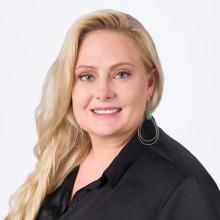