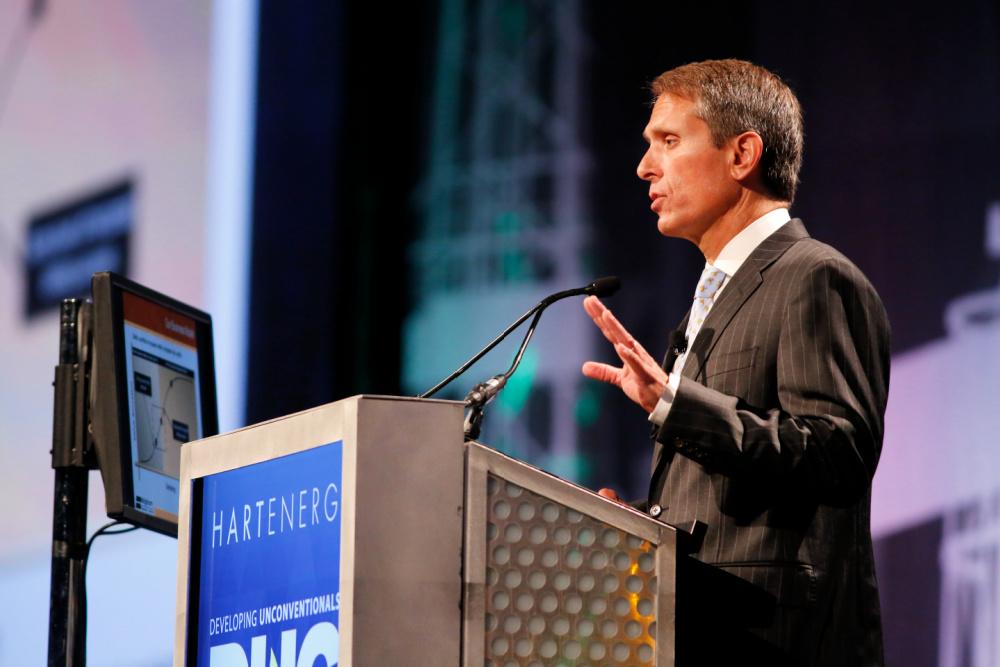 Shepherd also said VTX is willing to pay for inventory in its hunt for assets, preferably in the Permian and Williston basins. Pictured, Gene Shepherd speaking at a previous DUG Permian Basin conference and exhibition while serving as CEO of Brigham Resources. (Source: Hart Energy)

FORT WORTH, Texas—Gene Shepherd, CEO of VTX Energy Partners, is on the hunt for $1 billion deals in the U.S. Lower 48 and the Permian Basin in particular.

But what the founder and former president and CEO of Brigham Resources LLC finds concerning as he wades back into the industry is that strong oil prices and formidable E&P returns haven’t pushed capital providers to open up their wallets.

“The degree to which the financial community has been willing to overlook what appeared to me be very attractive returns and … the practical needs of the growing global economy—that’s alarming,” Shepherd said at Hart Energy’s DUG Permian Basin and Eagle Ford Conference and Exhibition on May 18. “That’s a little bit alarming.”

VTX is backed by Vitol, a global commodities trading firm that trades about 7.6 million barrels of oil and other productions daily. Vitol, Shepherd said, had a long history of investing in physical assets that complement their trading activities. In February, they teamed with Shepherd to begin investing in upstream activities in the U.S. Lower 48.

Such firms may well end up being the alternative capital source the world needs, particularly after the industry has weathered downturns, a pandemic and is suffering through chronic underinvestment.

Shepherd said the lack of access to capital for E&Ps remains an impediment for a world that isn’t producing enough crude and natural gas to offset supply disruptions and geopolitical tensions in Europe.

Shepherd said the flight of capital from the space is among “the limiting factors that are restraining or keeping U.S. upstream from responding to the growing global demand for crude and natural gas.”

Vitol intends to “deploy several billion dollars of equity capital” into the Lower 48, without a particular disposition to commodity type or basin, although Shepherd said his preference is the Williston and Permian basins because of his experience there as an explorer.

“We are pretty open-minded obviously,” he said. “We have a lot of experience in the Permian and the Williston feels likes it’s a little more mature.”

VTX is intent on finding assets that have a large component of associated development and, “ideally, we’d like to be in a position to take over operations.”

“It’s really hard to buy something exclusively PDP,” he said. “The benefit of having a large development opportunity set is that you might not get the commodity price right but you certainly have the opportunity then to go in after the fact.”

If prices fall and service costs come down, that will give operators a chance to enhance a position’s economics.

Shepherd’s career has been firmly rooted in frontier exploration up until now.

Shepherd, as CFO for Brigham Exploration Co., said the company purchased its Williston Basin assets beginning in 2002 for an average of about $400 per net acre. In 2011, the company sold its assets to Norway’s Statoil ASA, now known as Equinor, for $4.4 billion.

Then as president and CEO of Brigham Resources, Shepherd led the company in its acquisition of southern Delaware Basin acreage for $4,000 starting in 2013. In February 2017, the company sold to Diamondback Energy for $2.6 billion.

But as 2020 and the pandemic took a toll, as well as the headwinds of ESG and climate, “at that time decided to pivot,” Shepherd said.

“We moved away from what had historically been more of an exploration frontier focus in favor of a strategy more focused around developmental opportunities [in a] recovering global economy.”

However, Shepherd said he’s optimistic that alternative capital will “attempt to fill the void” created by investors less constructive on upstream and the departure of most private equity funding sources.

Those capital sources have historically given the industry’s smaller, more innovative E&Ps the ability to create advancements the shale sector has been reliant on for the past decade.

Still, Shepherd believes that organizations such as Vitol will come to the table, attracted to the industry’s potential for returns.

“By virtue of a constructive view on commodity prices and … the associate return opportunity, that will attract capital back to the space,’ he said.

Shepherd also said he expects a glut of marketed assets this year that, because of the scarcity of funding, will end up in “maybe busted or tabled processes,” he said.

As for bid-ask spread concerns, Shepherd said VTX is willing to pay for inventory.

Part of our business today is you have this wide bid-ask spread and we’ll just have to see, as prices normalize, if sellers and buyers can come to agreement,” he said. “It feels pretty challenged right now.”