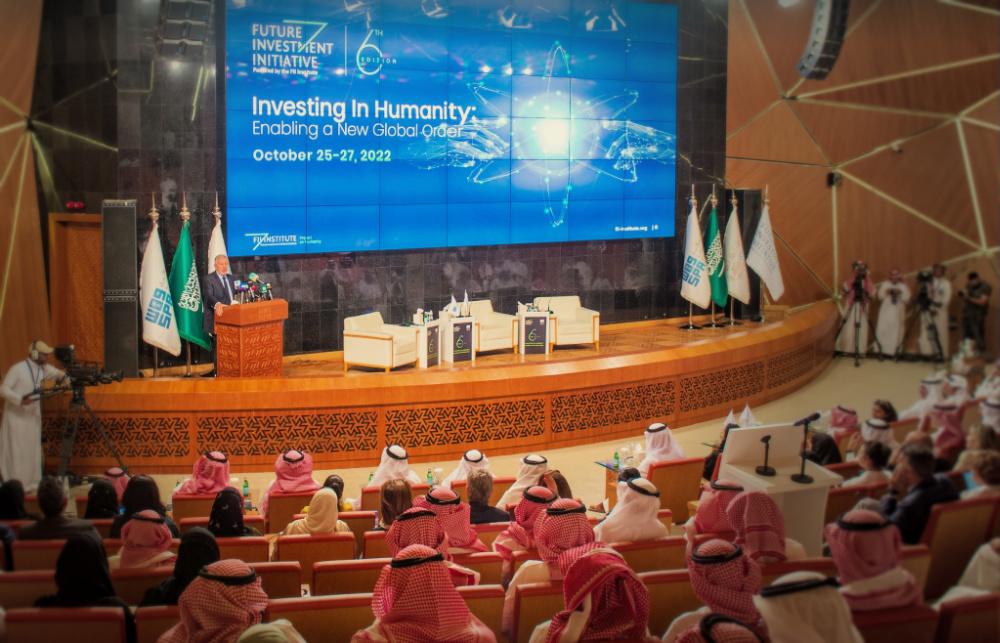 Relations between the U.S. and Saudi Arabia may have plunged to a new low after the kingdom cut oil production in defiance of Washington’s wishes, but for American banks and investors flocking to a Riyadh conference this week it is business as usual.

Jamie Dimon, CEO of JPMorgan Chase, Blackstone co-founder Stephen Schwarzman and David Solomon, head of Goldman Sachs, are among a host of western executives scheduled to speak at the Future Investment Initiative (FII).

The conference, dubbed the “Davos in the Desert,” opens on Oct. 25 just two weeks after U.S. President Joe Biden warned Riyadh that there would “consequences” after OPEC+ cut its daily output targets by 2 million barrels.

The White House accused Saudi Arabia, the world’s top oil exporter, of aligning with Russia, one of the other main producers in OPEC+, and furious Democrats have called for the administration to freeze arms sale to the kingdom and end cooperation with Riyadh.

But for U.S. banks, the allure of tapping into the kingdom’s oil wealth means they have no such qualms about engaging with Riyadh and supporting Crown Prince Mohammed bin Salman’s flagship annual investor conference.

While much of the rest of the world frets about the risk of recession, Saudi Arabia is enjoying its first oil boom in almost a decade as Russia’s war in Ukraine has pushed up crude prices. The kingdom is forecast to have one of the world’s fastest-growing economies this year, with its output predicted to expand by more than 7%.

“In a world where capital markets are shut and investment bank earnings are down, the Gulf warrants attention,” said an executive at a U.S. bank.

The huge petrodollar windfall comes as Riyadh is pushing ahead with an ambitious plan to overhaul the economy and develop the conservative kingdom.

The Public Investment Fund (PIF), which is chaired by Prince Mohammed, has been one of the region’s most active state investment vehicles, snapping up foreign assets and committing to spending $40 billion annually in the kingdom as it oversees a string of megaprojects.

There has also been a number of initial public offerings in the kingdom over the past year, while the PIF recently issued its debut bonds. Saudi Aramco, the state-controlled oil company, has hired U.S. bankers to prepare for an IPO of its trading arm.

“That’s why FII will be so busy—the kingdom is engaging on a broad front,” the banker said. “OK, they don’t pay such good fees and the pipeline is relatively narrow, but the wallet is growing and will continue to grow.”

“The ambition of these guys [Saudi officials] is off the charts,” the executive said. “The balance of power is shifting to the Middle East in private markets.”

The Biden administration, however, will not be sending representatives to the conference, unlike last year when Don Graves, the deputy secretary of commerce, attended. A U.S. official said the decision not to send a delegation was owing to “scheduling issues” and was taken before OPEC+ announced its oil production cut.

A White House spokesperson denied a report by U.S. broadcaster NBC that the administration sought to dissuade U.S. executives from attending the conference.

The event’s organizers say U.S. officials were not invited, a sign of the frosty relations between Prince Mohammed and the Biden administration.

But Jared Kushner, Donald Trump’s son-in-law, and Steven Mnuchin, who was the former U.S. president’s treasury secretary, will be attending, according to a list of speakers. Prince Mohammed enjoyed far warmer relations with the Trump administration and the more than $600 billion PIF has reportedly committed to invest $2 billion in Kushner’s private equity firm, Affinity Partners.

It is not the first time tensions between the U.S. and Saudi Arabia have cast a shadow over the conference. Many western executives, including Dimon and Schwarzman, pulled out of the event in 2018 after Prince Mohammed drew widespread criticism following the murder of Jamal Khashoggi by Saudi agents.

The CIA concluded that Prince Mohammed, the nation’s day-to-day leader, authorized the operation to “capture or kill” Khashoggi, who was murdered at the kingdom’s consulate in Istanbul.

The crown prince blamed the murder on rogue operatives who have since been imprisoned. The killing led to the U.S. imposing sanctions on a number of Saudis and a campaign promise by Biden to turn Saudi Arabia into a “pariah.”

But bankers were quick to re-engage with kingdom and the current spat between the Washington and Riyadh is considered a political dispute that does not compare to the moral outrage triggered by Khashoggi’s killing.

The American Chamber of Commerce in Riyadh said it was “optimistic that the enduring commercial relationship between U.S. companies and Saudi Arabia will continue.”

After recently visiting Washington, Monica Malik, chief economist at Abu Dhabi Commercial Bank, said that while administration officials fumed, the message from the private sector was “‘we want to do more business in the region.”

“One thing is clear. As the global economy is in a difficult position, Saudi Arabia stands out as an area of strong growth and opportunity,” she said.