Halliburton has released its BaraOmni hybrid separation system, a separation technology that effectively removes ultrafine low gravity solids (LGS), resulting in better performing, longer lasting fluid systems to help operators significantly reduce costs, according to a company press release. The hybrid separation system features advanced capabilities to remove ultrafine LGS, which was not previously possible. This eliminates the need for dilution and improves the operator’s ability to recover drilling fluids so it can drill more wells with less fluid volume. In addition, BaraOmni allows drilling fluids, contaminated solids and other hydrocarbon waste streams to be treated with a single system. It replaces traditional complex solids control and waste management equipment setups. As a result, the operator can minimize waste transportation, offsite treatment and storage to reduce environmental exposure and total cost of ownership. halliburton.com 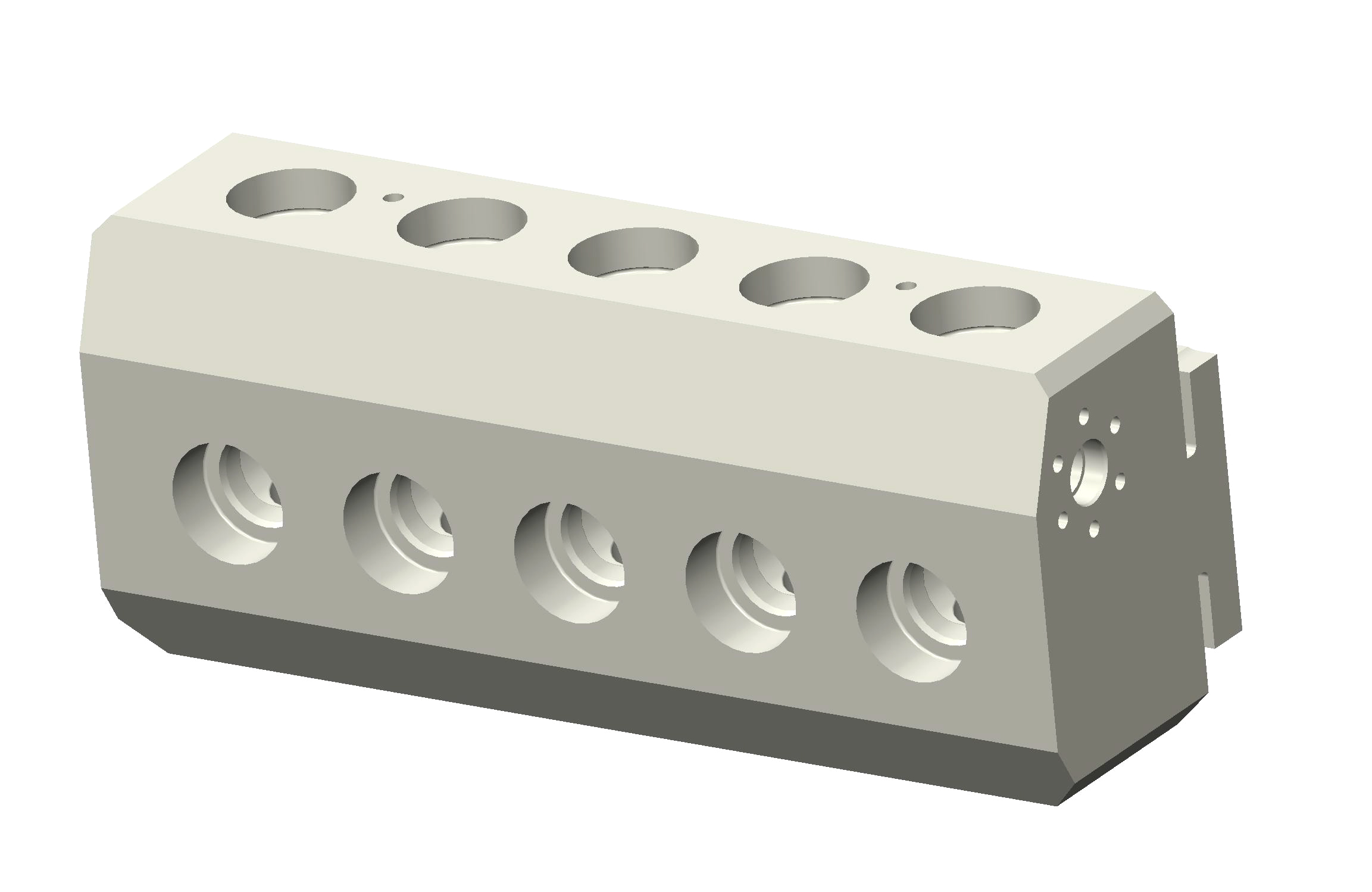 By eliminating one of the most common causes of fluid end failure—fatigue cracking at the intersection of the bores—new Cat Cube Bore well stimulation technology extends block life by 50% or more, according to a Caterpillar Oil & Gas press release. The geometry of the Cat Cube Bore significantly reduces the downtime and costs associated with fluid end replacement. Traditional products focus stress to the corners of the intersecting bore, resulting in high concentrated stresses in localized areas. Stress combined with corrosion pitting causes cracks to initiate and spread, compromising the pump’s overall function and leading to block failure. The Cat Cube Bore design disperses stress from the high-pressure bore into the surrounding material. It removes material in critical areas near the bore intersections and smoothes large corners, which in turn smoothes the stress profiles and allows energy to be absorbed by the surrounding block material. According to validation testing performed in the field, the design completely eliminates the failure mode for intersecting bore corrosion fatigue cracking. Field trials are underway or complete at nine different customer sites across the U.S. cat.com 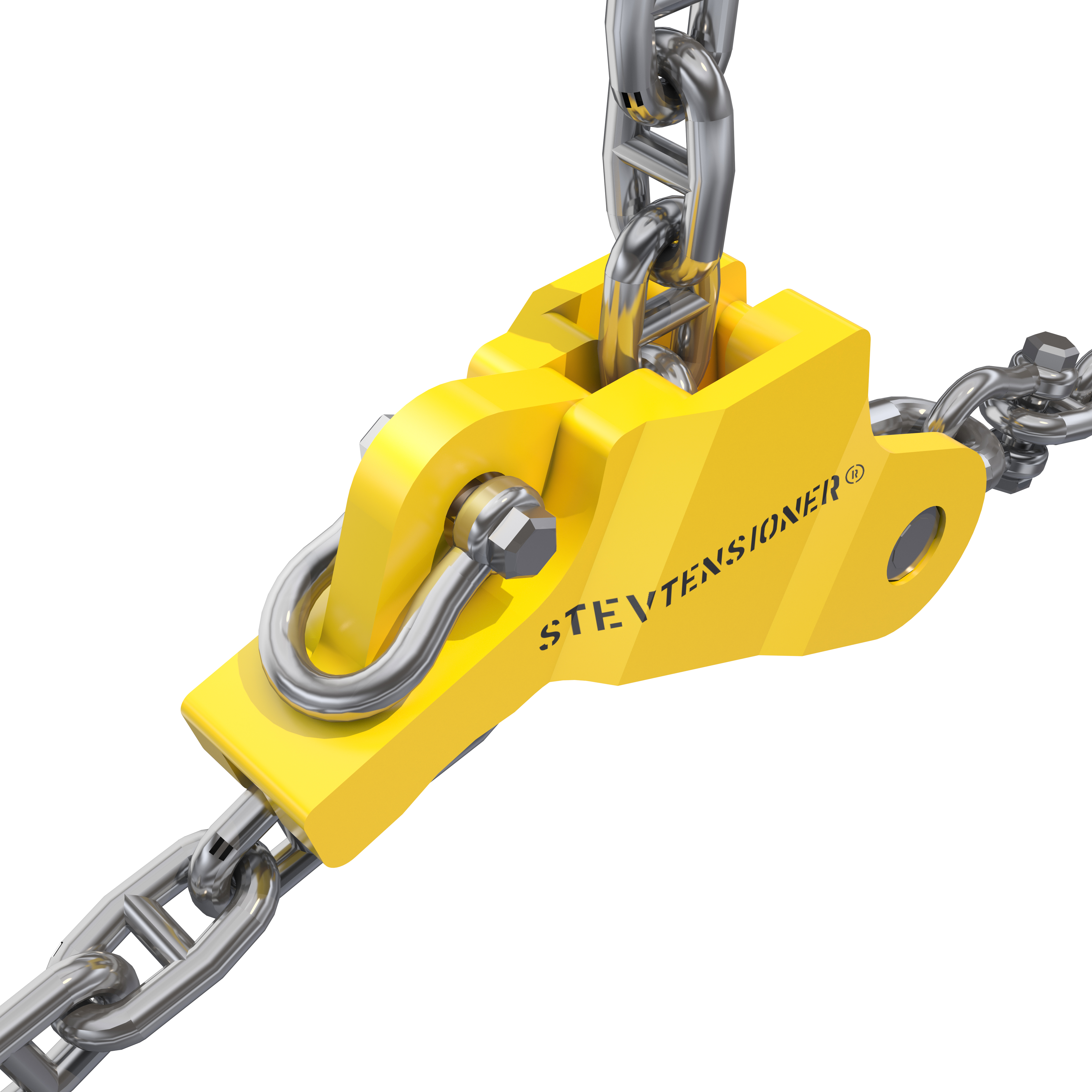 The proof loads of a permanent mooring system for catenary anchor leg mooring buoys and FPSOs are typically 80% to 100% of the design load so that substantial bollard pull capacity is required. The use of Vryhof’s STEVTENSIONER for subsea tensioning offers significant cost benefits as it reduces the required load by typically 60%, a company product announcement stated. As a result, mooring installations can be performed from modest anchor handlers or crane barges. The STEVTENSIONER is basically a chain shortening clutch with the mooring chain connected on one side and a reaction chain running through it. A vertical pull can induce more than double that pull in the horizontal leg. Repeatedly heaving up and slacking the STEVTENSIONER in a yo-yo action builds up the load in the mooring chain until the required tension is achieved. Typically five to seven cycles are sufficient. vryhof.com

Materials scientists at Southwest Research Institute (SwRI) have developed a superhydrophobic coating and a process for applying it to the internal surfaces of long tubular structures, according to a company press release. The technology primarily is designed to mitigate or prevent hydrates and other deposits from adhering to subsea pipelines. SwRI’s Lotus family of coatings has surface properties, such as surface energy or tension, that can be tailored chemically to prevent different kinds of deposits from adhering to the pipe’s interior. Under an exclusive licensing and technology transfer agreement, the Lotus coating technology is being transitioned to an energy services company for the full-scale production of the coated pipe so that the sponsoring client can further demonstrate its performance in deep offshore well applications. swri.org

Coatings formulated with LUMIFLON FEVE resins from AGC Chemicals Americas are ideal for offshore and marine structures like oil rigs, tanks and vessels because they provide excellent corrosion protection and guard against ultraviolet rays, wind, rain, chemicals, dirt and petroleum products, according to a company press release. LUMIFLON-based coatings can be formulated to last for 30 to 60 years. These resins are designed to reduce life-cycle coating costs, improve asset utilization and eliminate the need for multiple painting cycles. agcchem.com 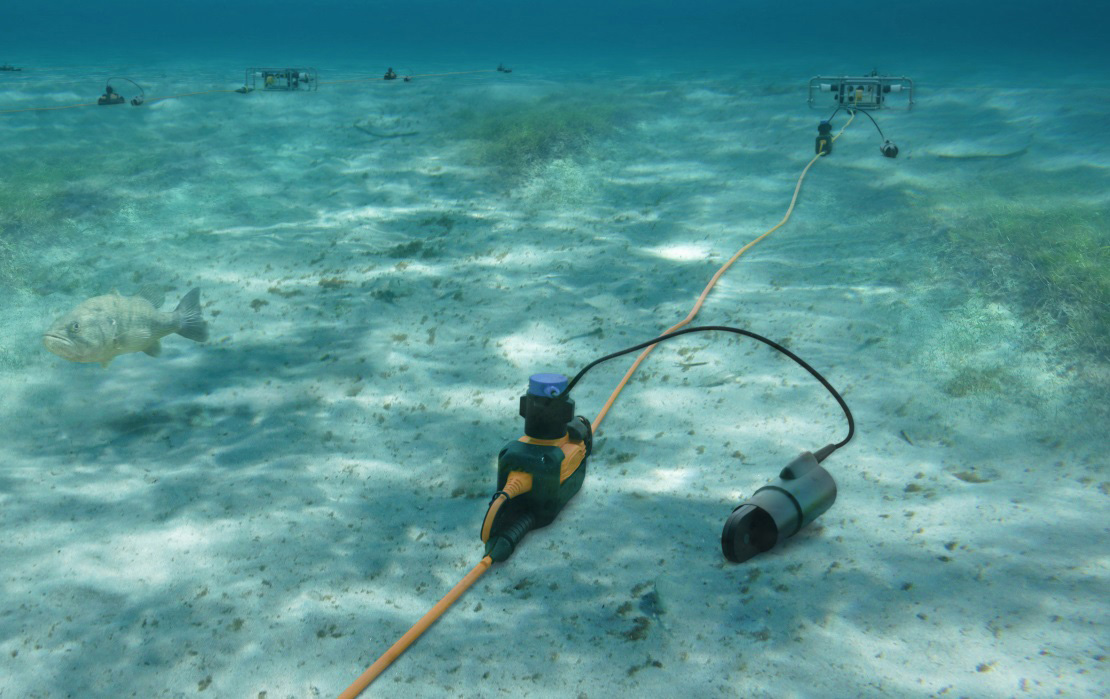 Sercel has released a transition zone version of its 508XT seismic acquisition system, according to a company press release. Seismic crews now will be able to deploy the 508XT solution in marsh zones and water depths of up to 25 m (82 ft). Designed with reinforced hardware to withstand the complex challenges of operating in shallow-water environments, the new 508XT transition zone system also benefits from Sercel’s fault-tolerant X-Tech cross-technology architecture, featuring local storage and automatic rerouting to maximize survey productivity. sercel.com

Hands Free Bolting Ltd. has released the Flange Alignment Pin, a fast, safe and simple method of lining up bolt holes, according to a company press release. Simply insert the pin into the bolt hole with the largest gap, turn it 180 degrees to align the bolt holes, insert bolts then turn 180 degrees to remove the pin. Each pin also features an inbuilt safety tether attachment to further support safe working procedures by preventing dropped objects. Eliminating the need for a hammer, the Flange Alignment Pin is designed with a tapered end allowing access to offset bolt holes, ultimately speeding up the bolting process. handsfreebolting.com

PGS, in partnership with TGS, has commenced a new 3-D multiclient project in East Canada. The new Tablelands 3-D GeoStreamer survey will cover approximately 8,000 sq km (3,089 sq miles) in an active Newfoundland area of the Flemish Pass and Orphan basins, according to a press release. The acquisition is expected to complete in the late third quarter of 2018. Following this eighth consecutive season of data acquisition offshore East Canada, the jointly owned library will have more than 175,000 km (108,740 miles) of 2-D GeoStreamer data and approximately 36,500 sq km (14,093 sq miles) of 3-D GeoStreamer data. An expansive well log library also is available in the region, along with advanced multiclient interpretation products that will improve play, trend and prospect delineation. Fast-track data will be available in the fourth quarter of 2018 with final data in the second quarter of 2019. The survey area will be seamlessly merged with the Long Range 3-D project acquired in 2017. pgs.com, tgs.com

Flexible software provides visibility into status and progression of opportunities

Rose & Associates LLP and 3GiG have released Appra, a flexible software that provides E&P companies with a robust, secure infrastructure to manage their portfolio of exploration and appraisal plays, prospects and projects from concept through development, according to a Rose & Associates press release. Appra implements rigorous version control of risk and resource assessments as opportunities mature. The software aligns to a company’s decision-making process, providing visibility into the status and progression of its opportunities. With this system, companies can benchmark and report on the length of time an opportunity has spent in a given stage, providing leadership teams the ability to intervene when necessary. It also enables active management of the portfolio to meet the company’s goals. Also, the software provides out-of-thebox integration with Rose & Associates’ suite of E&P risk analysis software tools. roseassoc.com, 3-gig.com 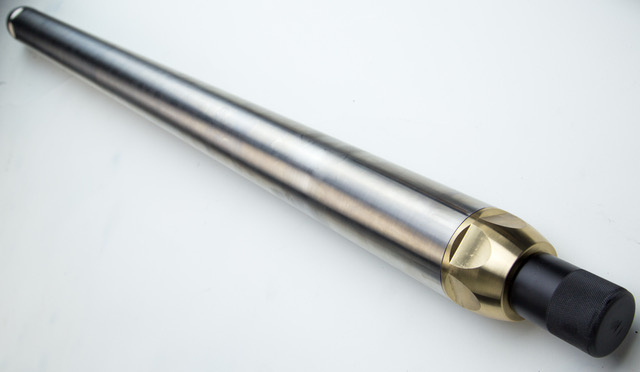 Probe has released the RAS pulsed-neutron tool, a three-detector system that uses sigma and carbon-oxygen (C/O) techniques to measure reservoir fluid saturation of oil, water and gas, according to a press release. The ability to accurately and reliably monitor reservoir conditions is an ongoing challenge for operators and service companies alike. Specialists at Hunter Well Science, a subsidiary of Probe, developed the RAS pulsed-neutron tool to measure reservoir fluid saturation of oil, water and gas. It operates in three basic modes: 1) sigma: water saturation detected via thermal neutron decay; 2) C/O: oil saturation detected with gamma spectroscopy; and 3) water flow: water velocity from oxygen activation. Also, in sigma mode, the three-detector array can be used to measure gas saturation. For wells with limited data, the tool can make standalone porosity and lithology measurements. probe1.com

Andax has released the Xtreme Shell pipe flange containment system, which is a reusable, hard containment shell designed to fully enclose a pipe flange, manifold or any other leak point, according to a company press release. The Xtreme Shell’s drain hose diverts the leak to a closed container, thereby reducing the potential danger of accidents or injuries caused by spills around equipment and walkways and eliminates the mess and ground contamination. The optional Andax Remote Monitoring System eliminates the need to monitor remote locations visually. It allows users to monitor fluid levels from a smartphone or computer 24/7 and to receive instant alerts and notifications via text or email. andax.com

Honeywell Process Solutions has released the Safety Manager SC, the next generation of its Safety Manager platform. Its modular, scalable design enables it to function as a single platform for all enterprise safety applications, allowing customers—who are often using four or five different safety systems—to consolidate and reduce their training and engineering costs, and spare parts inventories, according to a company press release. Safety Manager SC incorporates a new Series C-based controller and Honeywell technologies such as LEAP, Universal Safety IO, offline simulation and Experion integration, which collectively simplify safety system engineering, development and testing. The platform was designed to ensure safety, simplify operations and reduce costs. It is ideal for global hydrocarbon processing companies with greenfield projects requiring safety integrity level (SIL) 2 or SIL 3 solutions for distributed and safety applications or standalone safety solutions. honeywell.com 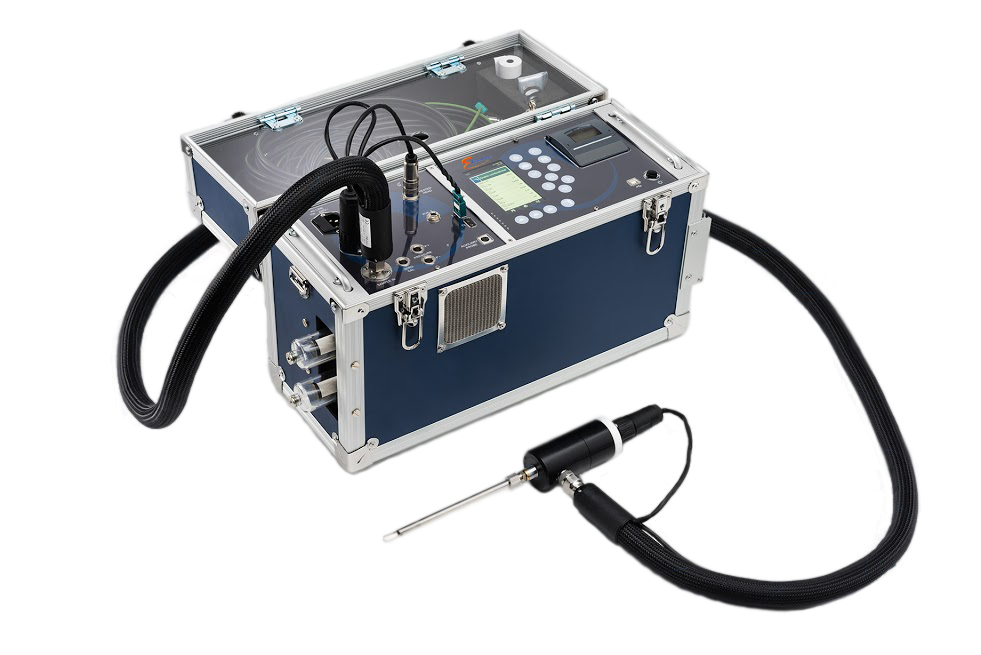 The new E9000 emissions analyzer with a heated sample line is a completely portable system for U.S. Environmental Protection Agency compliance level emissions monitoring and testing, according to a company release. The E9000 is ideal for regulatory and maintenance use in boiler, burner, engine, turbine, furnace and other combustion applications. It has up to nine total gas sensors and electrochemical sensors and nondispersive infrared sensors. Other features include a heated probe head and sample line and an internal thermoelectric chiller with automatic condensate removal. The emissions analyzer also has an internal data storage memory with 16,000 tests and a built-in printer with nonfading paper. Also, users can monitor and save data using an Android application. The analyzer also features software with automatic datalogging, is low NOx and true NOx capable and has precalibrated gas sensors. e-inst.com

2022-04-12 - It is Warburg Pincus’ second attempt to sell RimRock Oil & Gas in just over a year, the sources told Reuters. A 2021 auction process failed to secure a buyer for the Bakken gas producer at the valuation that Warburg sought.