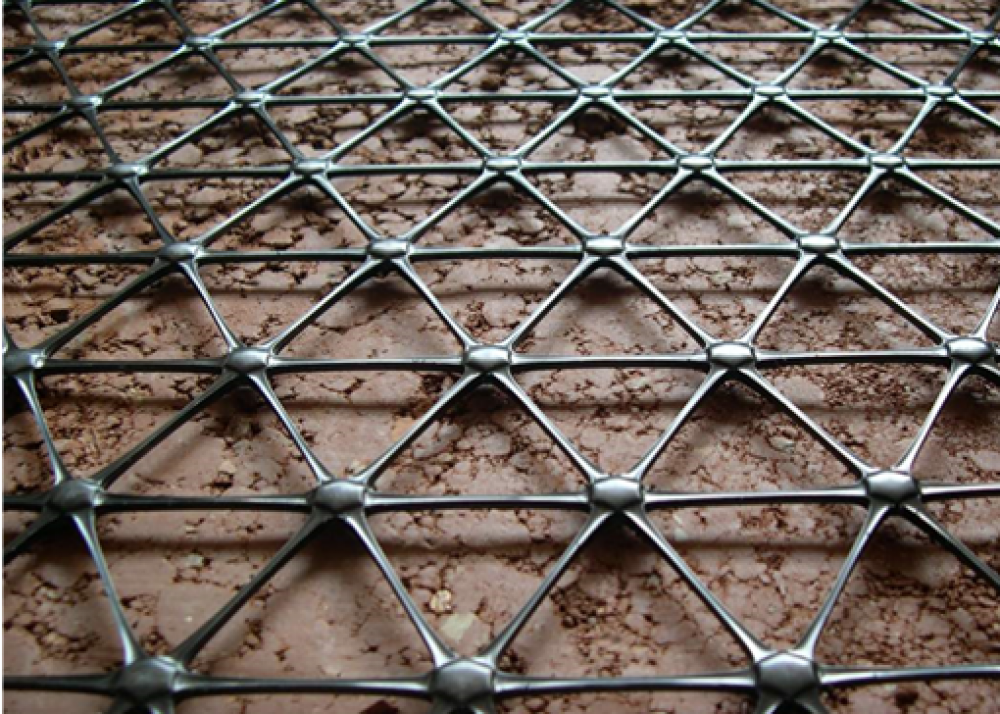 Biaxial or multiaxial geogrids are those used in the construction of roads and other horizontal surfaces, and they are typically trafficked with some type of wheeled vehicle. A multiaxial geogrid is pictured. (Source: Tensar)

Since the first oil well was drilled in the U.S. in 1859, there have been incredible advances in technology and engineering, including—just to name a few—directional drilling, increases in well depths, new refining processes and fracking. In support of these new advances, tremendous strides have been made in the construction of roads and infrastructure, including heavy haul roads, working surfaces, crane pads and laydown-storage yards, by using geosynthetics.

With the recent downturn in the oil industry, operators will be focused on optimizing site construction costs, completion costs and long-term maintenance costs more than ever. Geogrid, a type of geosynthetic used to stabilize soils, has helped these sites make tremendous strides toward becoming more profitable.

Conventional solutions for adverse site conditions include chemical treatment (adding and mixing lime, cement or other materials such as fly ash) into the soil. These soil treatments were long thought to be the only way to improve existing conditions to adequately support the equipment required to drill and access sites.  In good weather, with the right types of soil, no significant freeze-thaw cycles, and no environmental or budgetary constraints, chemically altering the soil to gain limited strength is certainly an option. However, in almost all conditions and trafficking requirements, using geogrids in lieu of chemicals is a more cost-effective solution, both initially and over the life of the well, access road or working surface.

So what are geogrids, and how can they improve your bottom line?

Geogrids are made of a geosynthetic materials and used to stabilize soil. Geogrids have openings, or apertures, allowing aggregate materials to strike through and be confined, thus spreading out or supporting the applied loads. There are three primary categories of geogrids: uniaxial, biaxial and multiaxial.

Uniaxial geogrids support loads applied in one primary direction and are incorporated in the design of walls, slopes, levees, berms and embankments, creating mechanically stabilized earth structures. In the context of upstream and midstream construction, a uniaxial geogrid is most often used in the construction of well pads, large containment berms around tank farms or transfer facilities, as designing with uniaxial geogrids allows for steeper side slopes, thus requiring a smaller project footprint, less fill material and therefore reduced construction costs.

In addition to increasing the sustainability and factors of safety, uniaxial geogrids are often used downstream in the design and construction of containment levees around petroleum refinery facilities subject to hurricanes or other weather phenomena.

Biaxial or multiaxial geogrids are those used in the construction of roads and other horizontal surfaces, and they are typically trafficked with some type of wheeled vehicle.

In most applications, a geogrid is rolled out and aggregate material is simply placed and spread on top of the geogrid. The amount of required aggregate depends upon (1) the existing soil type and strength, (2) the types of vehicles expected to use the road or surface and, most importantly, (3) the type and performance of the selected geogrid.

Synonymous to the technological advances that have occurred in directional drilling, there have been significant technology advancements in how geogrids are designed and manufactured in the past 40 years.

The first geogrids, created in the 1970s, were biaxial geogrids and made of materials such as polypropylene, coated polyesters and high-density polyethylene. Biaxial geogrids have square or rectangular openings and have strength in two primary directions, perpendicular to each other. Over the past 12 years, significant strides have been made in geogrid technology through extensive R&D obtained from full-scale testing. This has led to the development of higher-performing, multiaxial geogrids.

For most applications in the oil and gas industry, triaxial geogrids have replaced biaxial geogrids because their multiaxial apertures yield a hexagonal shape, which is one of construction’s most stable and widely utilized structures, and it provides an even stronger in-plane stiffness.

Decades of research show the geogrid component of a mechanically stabilized layer needs to effectively respond to the applied load pattern, and a wheel loading is conical, radiating 360 degrees from the point-of-contact. So when the load encounters the geogrid, the footprint is nearly circular, and pressure monitoring confirms the hexagonal shape of multiaxial geogrids matches this load pattern more closely than the rectangular or square shape of the biaxial geogrids. As a result, the existing subgrade, which without geogrid may not support 10% of the loads from the construction and service vehicles, "feels" less weight.

How does this translate to lowering costs and improving profits? Quite simply, the better the geogrid does its job, or confines the material placed on top of it and spreads out the loads, the less required aggregate thickness.

Geogrid can be installed in virtually any weather allowing the construction schedule to be maintained. Additionally, the installation of geogrids does not require specialized equipment or personnel, enables construction equipment to be operated on the improved surface immediately after placement of the aggregate fill and always reduces the thickness of required material. Finally, sites stabilized with geogrid perform for much longer periods of time, so operations aren’t halted for maintenance. And, unlike with chemical stabilization that is soluble over time, geogrid surfaces are permanent and consistent.

In summary, advances in site-work infrastructure have paralleled the other technological advances in oil and gas E&P. The construction of access roads and other working surfaces using geogrids is more cost-effective than conventional approaches as it requires less time to build and maintain, and it results in all-weather, uninterrupted access to, from and around well sites, compressor stations, tank farms, offloading facilities and laydown yards.

At the end of the day, using geogrids to cut costs in unpaved, aggregate roads and working surfaces means more profit per barrel of oil, which is as important today as it has ever been.