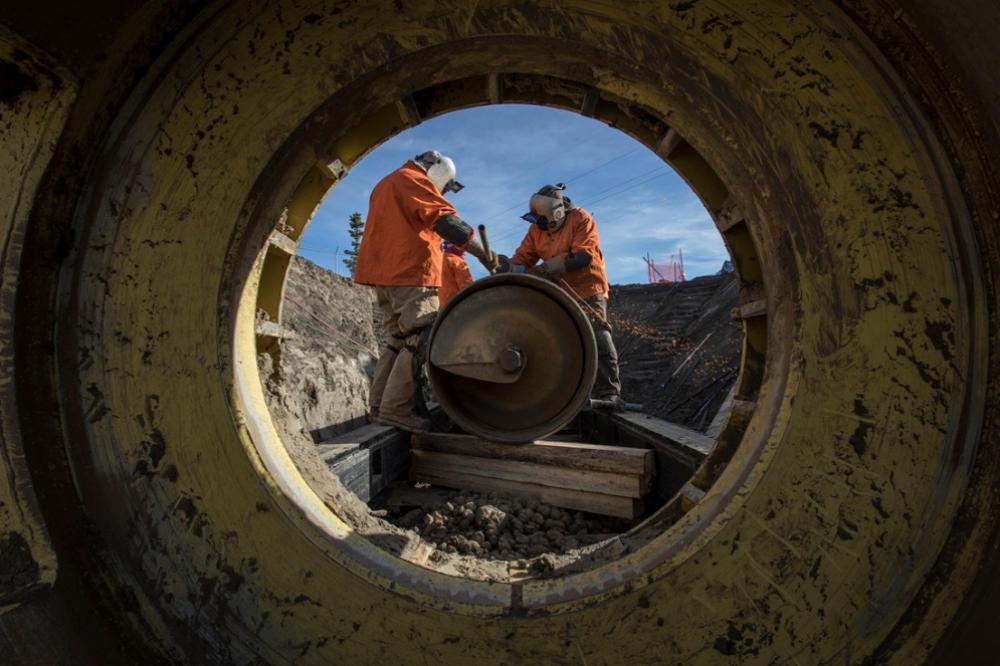 Construction in 2017 on the replacement program of Enbridge’s Line 3, part of the company’s Mainline network. (Source: Enbridge Inc.)

The U.S. state of Michigan filed a lawsuit June 27 asking for an oil pipeline operated by Calgary, Alberta-based Enbridge Inc. that runs under the Straits of Mackinac in the Great Lakes to be decommissioned, which Stratas Advisors said could result in a huge impact.

The pipeline, Line 5, carries NGL and light crude with total capacity of 540,000 barrels per day (bbl/d). What has long been a bone of contention between Enbridge and Michigan is an underwater portion of Line 5 that runs under the Straits of Mackinac. According to Michigan, a leak from the twin 66-year-old pipelines would cause catastrophic environmental damage to the Great Lakes.

In the lawsuit filed June 27 in the Ingham County Circuit Court, Michigan Attorney General Dana Nessel asked the court to find that Enbridge’s continued operation of the Straits pipelines under an easement granted in 1953 violates the public trust doctrine.

According to a report by Reuters, the lawsuit said the pipeline is a common law public nuisance and violates the Michigan Environmental Protection Act because it is likely to pollute water and hurt other natural resources. It identified an anchor strike as the most significant risk to Line 5, which runs through the straits where Lakes Huron and Michigan meet.

Former Michigan Gov. Rick Snyder’s administration made agreements in 2018 with Enbridge for a replacement of the risky Line 5 pipeline running through Straights of Mackinac. However, the administration of the current governor, Gretchen Whitmer, has declared the agreements invalid.

Enbridge has taken the case to the Michigan Court of Claims. But if no new agreement is achieved, Enbridge would have to shut down Line 5.

In response to Michigan Attorney General’s legal filing on June 27, Enbridge said in a statement: “We are disappointed the State chose not to accept our offer to advance talks on the Straits tunnel, a project that would make a safe pipeline even safer. ... We remain open to discussions with the Governor, and we hope we can reach an agreement outside of court.”

Habib Khan, senior analyst of downstream at Stratas Advisors, said closure of Line 5 would cause a disruption of light crude oil supply to some of Eastern Canada.

Meanwhile, Sarnia has three operating refineries with a combined capacity of 275,000 bbl/d. These three refineries use 140,000 bbl/d of light crude, according to a report by Stratas Advisors.

If Enbridge Line 5 closes, Khan said Line 78B will be able to provide enough light crude for Sarnia refineries. Although, he said there would be a shortage of light crude supply for Montreal, Kinatone and Nanticoke refineries (Lines 7 and 9).

“If contractual restrictions between Enbridge and non-Sarnia refineries lead to shortage of light crude supply to Sarnia refineries, trucks and railroads would be used to transport the required light crude,” Khan said in a June 27 report. “Until the whole supply chain comes to an equilibrium, the refineries will run at low utilization.”

Analysts with Tudor, Pickering, Holt & Co. (TPH) agreed that a shutdown of Line 5 would reduce downstream connectivity and may even lead to a bottleneck at Enbridge’s Superior Terminal.

Located in Superior, Wis., the 550-acre terminal has become a crucial hub for crude oil distribution across the U.S. with about 21% of all daily U.S. crude imports passing through the facility, according to Enbridge’s website.

“Expanded capacity would be required to move light crude and NGL out of Superior to the Midwest on the Mainline on Line 6, Lines 14/64 or Line 61, as the other Line 5 option proposed by Enbridge [open cut method] would keep the pipe underwater,” the analysts wrote in a June 28 research note. “Shippers would be apportioned on downstream pipelines until more capacity was made available.”

“Although a full volume reduction on the Mainline system isn’t likely as there will probably be some southward diversion via batched shipments,” the analysts added.

Reuters contributed to this report. A detailed report with regional-level analysis is available to subscribers of Stratas Advisor’s Global Refining and Products service. Complete data for the analysis can be found on Stratas Advisors’ Data Tool.