Uber Technologies Inc., the world’s most highly capitalized startup, develops, markets and operates the mobileapp-based transportation network. The Uber app allows consumers to submit a trip request, which is routed to crowdsourced drivers. The service is available in 55 countries and more than 200 cities worldwide. It is estimated that Uber will generate $10 billion in revenue by year-end 2015.

Airbnb is a website for people to rent out lodging. Unlike traditional hotels, Airbnb works not by scaling inventory but by increasing the hosts and travelers and matching them with each other. It has more than 800,000 listings in 33,000 cities and 192 countries. As of June 2015, Airbnb completed a new round of funding of $1.5 billion that brings the company’s value to $25.5 billion.

Just as Uber stood the taxi lobby on its head and Airbnb disrupted the hotel industry, could this “share economy” be coming to the oil field?

According to a subset of forward-leaning operators, it’s already here.

Share economy
The share economy takes a variety of forms. Leveraging information technology is at the heart of this movement, empowering corporations, nonprofits and yes, even independent operators with information that enables distribution, sharing and reuse of excess capacity of goods and services.

To back up a bit, the share economy (also known as collaborative consumption) began to emerge in the mid-2000s as new business structures began to crop up that were enabled by social technologies and an increasing sense of urgency around global population growth and limited resources. In fact, it was the financial crisis of 2008 and subsequent housing bubbles that spawned users to reconnect through peer-to-peer marketplaces that turned underutilized assets and resources into new jobs, income streams and community networks.

With the current collapse in oil prices, operators in the oil field are looking for answers. And for some, this notion of the collaborative community might be just what they’re looking for.

Digital oil field goes bust
While the industry has focused for nearly two decades on the concept of the digital oil field (essentially, replacing the human element with sensors and SCADA systems), most independent operators have remained on the sidelines. Why is this so? Not only are many of these field automation systems cost-prohibitive to the small and midsized independent, but they also require a high level of expertise to design and deploy.

Even the operators who’ve managed to roll them out with high hopes of replacing the human element with machines quickly find they are saddled with a new set of technological problems. Gummed-up tank sticks, faulty sensors and the expense of radio and cellular modems are enough to make any independent suspect of the efficacy of these solutions.

It’s a bold notion, but maybe the digital oil field isn’t the messiah it’s been touted to be. Even the largest operators who have successfully automated the collection of their production information are now struggling with the massive rate of incoming data. They must now find ways to consume, filter, process, execute models, perform analysis and recommend action to decisionmakers. And they must do this all in real time.

Hidden value
In Clay Shirky’s analysis of the power of crowds connected by information technology, there is a significant unused value in wasted time. Many of us have unused capacity in the course of our day. With social media and information technology, we can easily donate small slivers of time to taking care of simple tasks others need doing. Examples of these crowdsourced solutions include roustabouting, relief pumping and simply driving by to spot-check a battery of tanks.

The driving forces behind the rise of sharing economy in the oil field are numerous. A whole host of enabling technologies has reached the mainstream, making it easy for networks of people (both young and old) as well as organizations to transact directly. These technologies include open data and the ubiquity and low cost of mobile phones as well as social media.

This begs the question: Where is technology’s place in small and midsized operations? Among many backyard astronomy enthusiasts, there is a common phenomenon known as averted vision. Essentially, averted vision is an anomaly in which you can only see faint stars in the sky by gazing to the empty space next to them.

That said, is it possible that independent operators have found their solution by averting their attention away from this digital oil field? Perhaps the most intriguing part is that this solution relies more heavily on humans than ever before.

Height of cultivation runs to simplicity
Emmet is a 70-year-old pumper who resides in Chandler, Okla. Emmet has a lifetime of experience in the oil field and said, “There are two things that’ll eat you up as a pumper: gas and truck expenses.”

This particular pumper is choosy about his wells (and after more than 50 years of service to the oil field, he has the right to be). To do his best job, he limits the number of leases he takes on. And to keep his gas costs low, Emmet tries to keep his wells as tightly knit as possible. That said, he drives past dozens of wells for which he isn’t contracted on his route each day and said it’s still not uncommon to pay more than $1,000/month in gas.

Unused value is wasted value. Basically, unused value in the oil field refers to the time that services and human talent lay idle or can be repositioned and better allocated elsewhere. And it’s within this idle time and wasted value that mesh-model businesses and platforms derive their financial worth.

GreaseBook, an Oklahoma City-based startup that found early success via a simple mobile app designed to replace the paper and Excel gauge sheet, has taken the notion of the collaborative community to the nth degree. This month the company is unveiling Pumper Mesh, an online virtual army of lease operators all connected via their mobile devices.

By enabling operating companies to sort pumpers by state and county, this online directory enables lease operators to pump wells concentrated within one or two counties, saving gas and increasing the number of wells they can care for in a day.

Ideally, the app builds community. Many refer to this as a return to simpler times, when the community was there for its individuals.

With the industry’s ups and downs, it’s never been known for its loyalty to the guys who work with their hands in the field. With each downturn, a mass exodus of talent and knowledge takes place from the oil field. Until now, no one has ever looked out for these folks. That’s exactly what this project is doing: forming a semblance of a community between the operator and pumper. Everyone wins.

The applications of the human mesh in the oil field are limitless. For example, in much the same way a doctor only makes house calls when a patient is sick, electricians and field personnel could be on a roaming basis, only arriving (and being compensated) when a well is having issues. This is ideal for contract pumpers and company pumpers alike. Contract pumpers get access to new wells, and companies can farm out their existing pumpers as well as easily find pumpers to check on orphan wells that fall outside that company’s normal operating area.

However, for now small and midsized operators are ecstatic knowing they have options. They have access to field personnel who not only operate in close proximity to their company’s production assets but also have the ability to deliver that operator’s production information in near-real time.

While it’s true that there are some advantages to having digital equipment and monitoring, it’s also true that these devices need monitoring themselves. The human factor cannot be removed from the oil field. At the same time, the human mesh must be equipped with modern technologies that enable the market to move forward and also allow a share economy with no added overhead. The collaborative community allows such a merge of services and technologies.

The collaborative community also makes it possible to be more productive in the oil field. The increase of productivity means an increase in profitability. Profitability means that there is more room for expansion and, in turn, more job creation. In an economy that is being driven by the loss of jobs, it’s refreshing to find a solution that creates jobs while building the economy.

Is the share economy the miracle that will solve all of the problems with the oil industry? It most certainly is not. The price of oil will still be dictated and fluctuate outside the control of the independent operator. However, can mobile connectedness increase a company’s chances of maximizing the production of its oil and therefore help it to better capitalize on the amount of finances that it can obtain from a fully functional, waste-reduced and shared economic market? It most certainly can.

For more information, visit the company's website at greasebook.com. 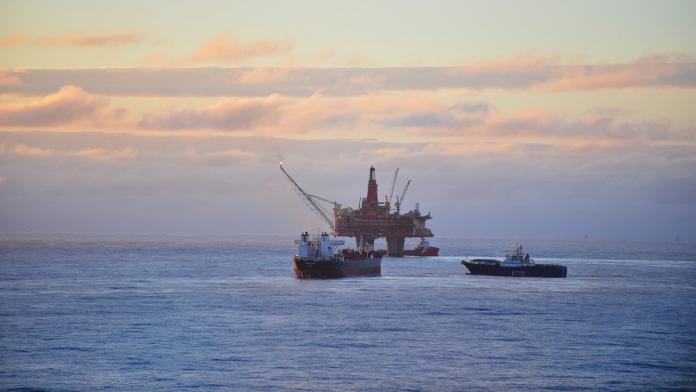 According to the agreement the parties will collaborate in new ways while carrying out the work on Statfjord safely and efficiently.