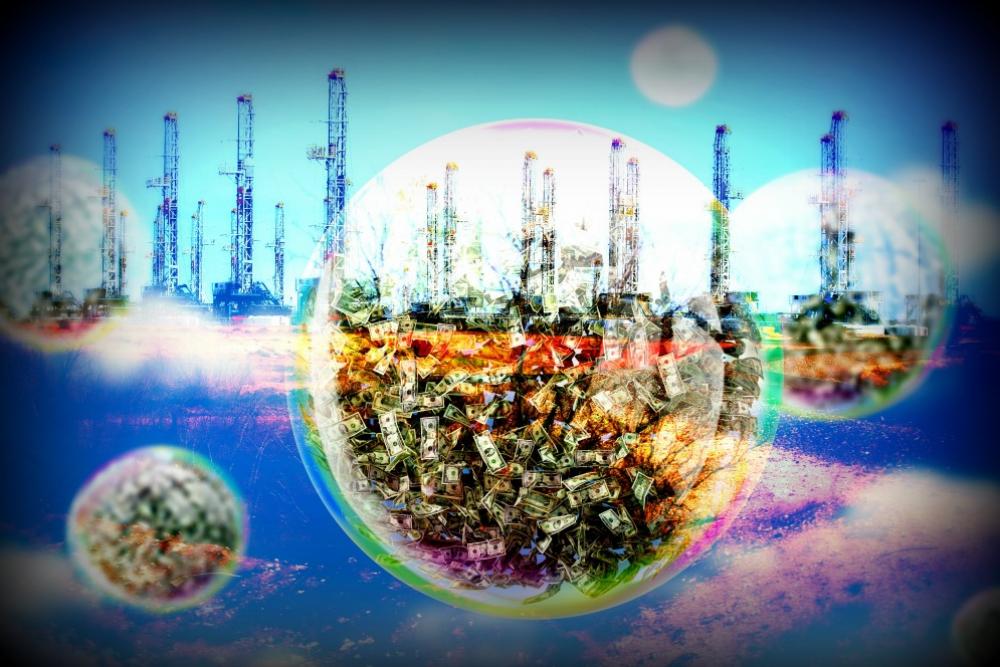 In what could be the last flicker of the shale land rush—or merely the most recent—Permian Basin operators are doggedly fortifying their new positions in the Midland and Delaware basins.

Billions of dollars in new deals continue to fuel the play. Companies such as QEP Resources Inc. (NYSE: QEP) and WPX Energy Inc. (NYSE: WPX) have emerged as prospectors for even more acreage.

But some are concerned that Permian valuations, which are now pinging upward of $40,000 per acre, might be inflated.

“Strongly priced M&A transactions in the Permian are causing some to be concerned about a bubble,” Charles Robertson II, analyst at Cowen and Co., said in an Aug. 19 report on the EnerCom Oil & Gas Conference in Denver.

However, Oklahoma Stack Play acreage is seen as mainly controlled by a few E&Ps, leaving the Permian as an emerging play where acreage is still attainable, Robertson said. “We would expect additional deals in the Permian, especially in the Southern Delaware, where limited data allows for higher bids.”

Sizable and contiguous acreage packages that can accommodate 10,000-foot laterals will trade at a higher premium, he said.

Though the deal is not finalized, QEP has already evaluated deal packages, said David Deckelbaum, analyst at KeyBanc Capital Markets.

“[QEP] sees additional assets on the market currently in the Midland Basin and will continue to look for deals that could work for it,” he said. “It also mentioned that it would entertain Bakken bolt-ons, but the availability of quality deals is the greatest hurdle.”

The Midland acreage could add about 2 million barrels (MMbbl) of oil to the company’s production profile, Doleshek said.

“We forecast to have a roughly flat production profile compared to last year,” he said. “Oil production will be up slightly.”

The midpoint of guidance is 20 MMbbl, compared to 19.3 MMbbl last year.

“We think the acquisition next year, when we get into our development program, will add about 2 million barrels on top of this 20 million barrels in 2016,” Doleshek said. 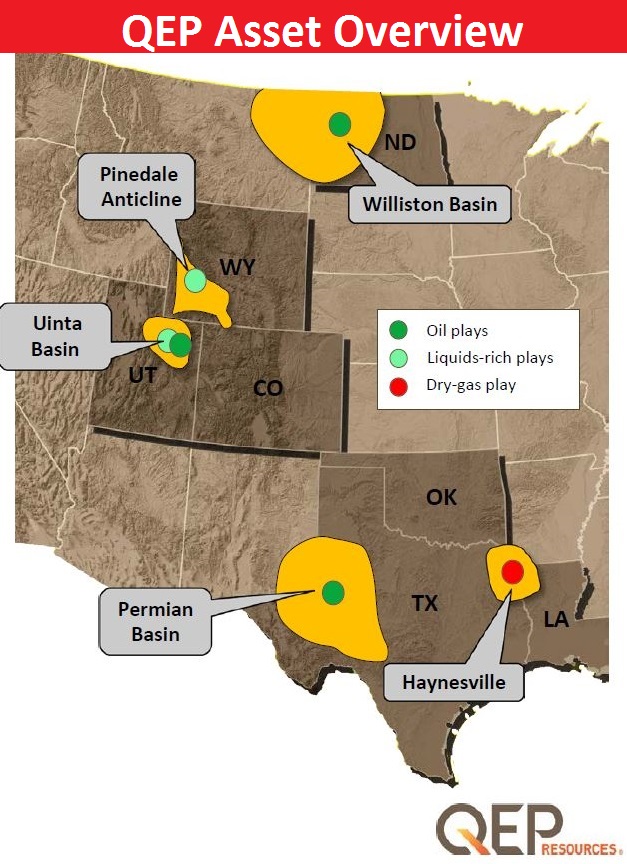 In a not-quite post-mortem of the deal—the deal is expected to close in September—Doleshek noted that in 2014 QEP was criticized for its lack of inventory. The Permian Basin acquisition will increase its horizontal locations by more than 50%.

“When you look at it on a target basis, it’s relatively reasonable,” he said. “We were estimating it was just under $8 [per barrel of oil equivalent (boe)].”

Cash flow neutrality will continue to be the focus in the second half of 2016, with expected cash of $350 million to $400 million by year-end, Robertson said.

If the company looks to divest, QEP’s gas plays would be on the table. Deckelbaum said the liquids-rich Pinedale is the most likely sale candidate due to its steady valuation.

“Outside of horizontal prospectivity on the flanks of the acreage, management believes that the rest of the asset value is relatively straightforward,” Deckelbaum said. “The Haynesville has the highest returns of the gas assets, but it might need to prove it up more to receive an acceptable valuation for the asset.”

However, Robertson said the Pinedale asset has received a significant amount of interest from the market, but QEP “recognizes that it must be able to cover lost cash flow in order to sell the asset.”

After billions in selling and buying the past two years, WPX Energy isn’t ready to feel comfortable.

Deckelbaum said WPX isn’t opposed to deals in the $1 billion to $2 billion range.

In July, WPX tacked on another 7,800 net acres in the Delaware Basin close to the company’s position in central Eddy County, N.M.

WPX also recently said it was doubling its estimated net resource potential in the Delaware Basin to 2.4 Bboe from 1.1 Bboe. It also increased its projected gross drillable locations to more than 5,500 from 3,600.

WPX plans to remain aggressive in execution and expansion into 2017, Robertson said. 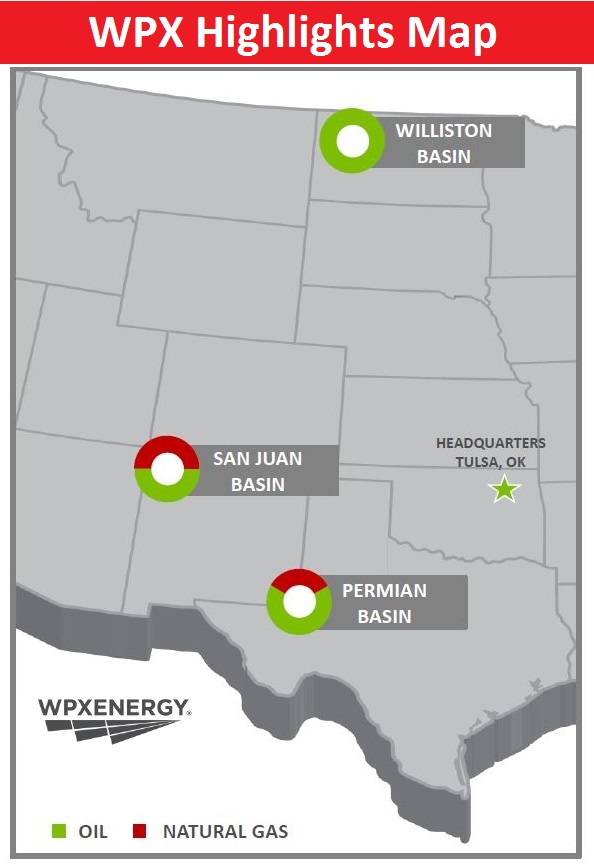 “The firm plans to grow into the asset plays that it has purchased,” he said. He added that the company could spend as much as $650 million on drilling and completions next year. WPX could employ up to five rigs in the Delaware, two rigs in the Williston and up to one rig in the San Juan Basin.

“The company's San Juan Basin assets received a significant amount of attention from conference participants in relation to its role in WPX's portfolio,” Robertson said.

Deckelbaum said the San Juan Basin appears to be a candidate for divestment for the company.

“Recent completions in the San Juan Basin were to test the potential of its position out there,” he said. “[WPX] wants to demonstrate what the play is capable of as it tries to position for an eventual exit. It needs to prove the quality, repeatability; and that there is running room on the inventory side.”

WPX said it will add a third rig to the Permian in October.

By its own measures, CEO Rick Muncrief has led a $5 billion turnaround of WPX in the past couple of years by shifting from natural gas to oil.

In retrospect, the company’s $2.75 billion Delaware deal seems easy to grasp. A Permian stronghold with nearly 100,000 net acres seems like a natural now.

But the basin was once an afterthought and WPX faced many questions at the time the deal was announced, Gaspar said.

“How to pay for it? What are you doing in this crazy market? Is that part of the basin even prospective? Is this Delaware thing really going to work out?”

“I think we all know today we were doing some really good homework, but we also made the move at the right time,” Gaspar said.

A starting point for how the Delaware is viewed can be traced back to May 2014, as Muncrief took charge of WPX. Management met to lay out its initial corporate strategy, Gaspar said.

“It was really all about what do we want to be when we grow up? As an organization we were spread kind of around the globe,” he said.

The company became “very serious” about portfolio rationalization—selling off assets in Argentina, the Marcellus, the Powder River Basin and even its flagship Piceance Basin asset.

Muncrief himself took on the initial steps of negotiating a private deal to enter the Delaware, meeting at a sandwich shop with Ronnie Irani, founder of RKI Exploration & Production LLC.

Muncrief would later tell Oil and Gas Investor the resulting deal is “the one I’m going to hold up as one that defined me, one that’s going to define the new WPX.”

WPX’s core strategy is simple: a bias for action.

“We have a focus on continuous improvement and accountability,” he said. “Everything we focus on is how do we become a better E&P company. How do our engineers drill better wells; our geologists find better geology; our land guys get the great deals done.”

In his new role, Kirk Tholen will be responsible for expanding the minerals portfolio of Tulsa, Okla.-based Alliance Resource Partners alongside coal and other investible opportunities.