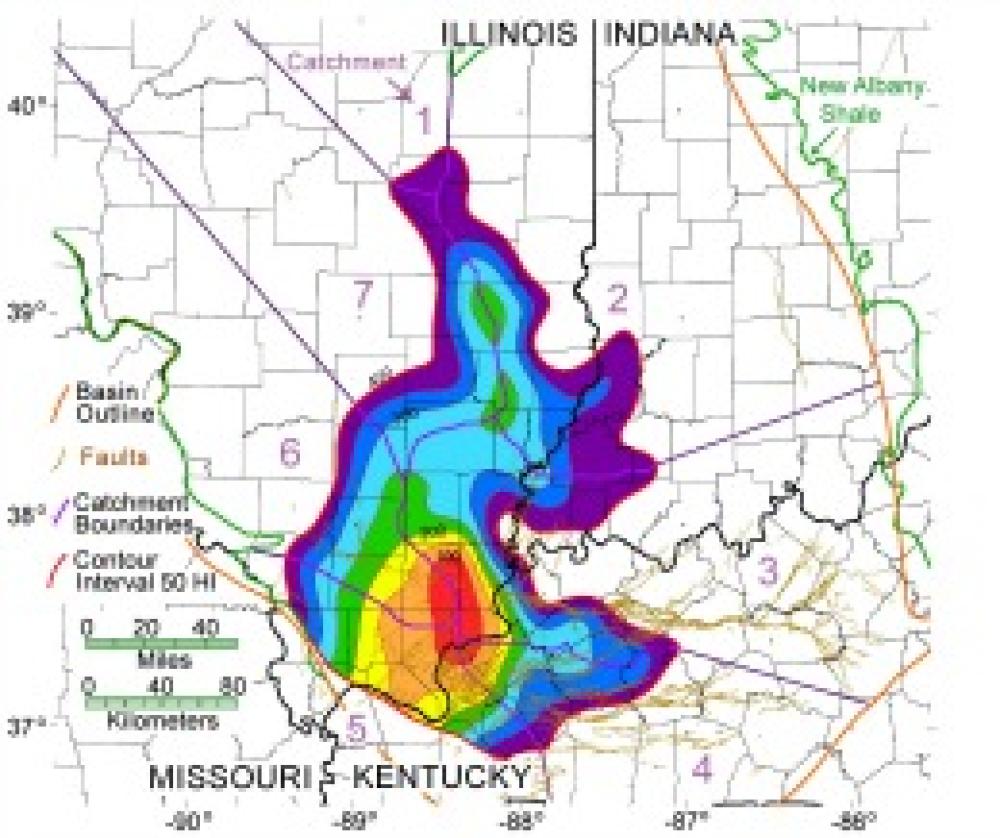 “Although it’s too early to tell”, according to a Global Hunter Securities report on the Illinois Basin, there has been “increased activity in a potential oil window on the New Albany shale.”

“From March 2012 to February 2013 only eight horizontal wells were permitted in Illinois. Of these eight permits, SM Energy was the only public E&P company, as far as we could find, with an Illinois horizontal drilling permit. Additionally, six different horizons were permitted with the Waltersburg and Lingle, the horizon included on SM's permits, each being the focus of two permits,” according to the report.

“SM’s strategy for Lingle, which is the interval just below the New Albany, mimics operators’ strategies in Utica. By landing the lateral in the slightly deeper Lingle, SM, presumably, can frack vertically into the New Albany,” according to Global Hunter.

According to the report, New Albany production never has been big in the 60,000 square mile basin that encompasses southeastern Illinois, far southwestern Indiana and Union and Henderson counties in northwestern Kentucky.

Cumulative basin oil production since the early 1900s is about 3.4 billion barrels. Production is generally from Devonian and Mississippian targets. Recent activity has been aimed at shallower St. Louis and Salem that lies below Pennsylvanian between 2,700 and 3,500 ft. These vertical wells have initial production rates of around 500 barrels of oil per day but most oil production comes from old stripper wells that pump 1-2 barrels per day.

The New Albany is thick with high total organic carbon (approximately 10%). The thermogenic shale gas is a continuous-type accumulation. The reservoir is a low-permeability, fractured shale with hydrocarbons. The formation pressure is low, there are gas shows or production in most holes drilled, and there is a general lack of structural control.

According to Global Hunter, “the area remains largely untapped with the more modern tools of E&P operators” such as 3-D seismic, horizontal drilling or hydraulic fracturing.

A 2012 Illinois Chamber Foundation study indicated that shale gas production in southern Illinois has the potential to create more than 45,000 jobs in the state and $9 billion in economic investment.

The study noted that production from New Albany shale is a well-known but it remains unknown if modern drilling techniques will be effective in extracting gas economically allowing for the ramp up of investment and production found in other areas of the country.

US Crude Stocks Down, Fuel Inventories Up as Refiners Hit the Gas

2022-06-29 - The U.S. oil industry has been trying to boost output, but inventories keep dwindling, with supplies at the Cushing, Oklahoma hub dropping to the lowest since October 2014, the EIA said.

2022-06-08 - Brent crude futures and WTI crude futures in the U.S. rose immediately following the data release, along with gasoline and distillate futures.