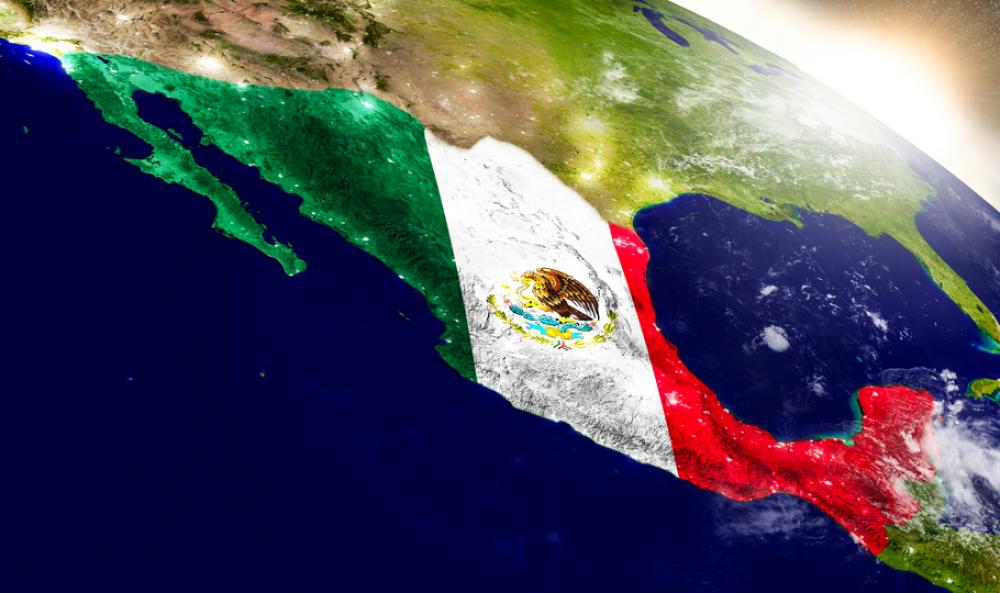 Some of the world’s biggest oil companies showed up Dec. 5 and agreed to invest on the Mexican side of the Gulf of Mexico, proving that deepwater exploration still has a pulse despite challenging market conditions.

With eight of 10 blocks receiving bids for Mexico’s first deepwater offering, in addition to Pemex landing its first international partner to develop the Trion Field, the so-called Round 1.4 is being called a success. The bid round was considered the most anticipated of a series of bid rounds included in Mexico’s inaugural Round One, which opened the country’s oil and gas scene to international players following its historic decision to deregulate its energy industry.

“It clearly exceeded my expectations,” Alfredo Alvarez Laparte, the Mexico energy segment leader for EY, told Hart Energy. “The 1.4 round awarded 80% of the contracts, which with the price of oil, was over expectations. It clearly shows the big oil companies are still interested in deepwater fields in the current price environment. In the end, it also confirms that the Mexican government put good pieces of land into play and that the rules were acceptable for players.”

The deepwater round attracted majors and national oil companies alike. Capital investment commitments made by companies on the blocks total about $4 billion with each exploratory well expected to cost about $100 million, Juan Carlos Zepeda, president of Mexico’s National Hydrocarbons Commission (CNH), said in a press conference following the daylong event.

“We are very glad with the results,” Zepeda said.

The eight contracts awarded combined with Trion are expected to add 900,000 barrels per day (Mbbl/d) to Mexico’s production, Zepeda said. But that could be five or six years, which is when first hydrocarbons from the Trion Field are anticipated. Production from the eight exploratory areas awarded, including in the prosperous Perdido Fold area, might be nine or 10 years away, he added. 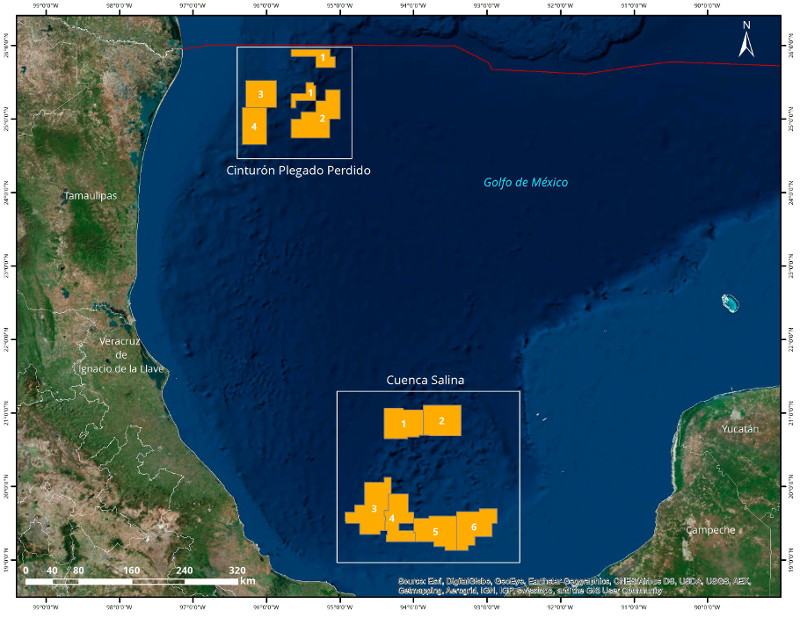 The blocks’ location near the oil and gas Perdido production hub, which produces hydrocarbons from the GoM’s Lower Tertiary/Paleogene trend, was expected to generate the most attention. Winners of the four blocks, which spanned 8,218 sq km (3,173 sq miles) in the deepwater GoM, included some of the world’s top oil companies.

Block 2: The consortium of Total and ExxonMobil was victorious in its effort to secure exploration rights for Block 2, the 2,977-sq km (1,149-sq mile block) that could hold about 1.44 Bboe in light and extra light crude as well as natural gas;

Block 4: Without any competition, China Offshore Oil Corp. snagged another block. This one spanning a 1,877-sq km (725-sq mile) area that could hold just more than 540 MMboe of oil based on the energy ministry’s estimates.

In U.S. territory, the Shell-operated Perdido spar, at about 2,450 m (8,000 ft) deep, currently gathers, processes and exports production from the Great White, Silvertip and Tobago fields but has room for more from near-field exploration operations in the Perdido area.

Data from CNH show that the U.S. Perdido area, with 11 exploration wells drilled, has a 45% success ratio. With recoverable reserves at 511 MMboe, oil production was about 65 Mbbl/d in 2015 while 120 million cubic feet per day (MMcf/d) of gas were produced.

This gives hope to oil and gas companies looking for success in Mexican waters, where no oil and gas was produced last year in the Perdido area. However, Mexican officials said the 12 exploration wells drilled there have struck hydrocarbons with a success rate of 42%. Prospective resources in Mexico’s Perdido area are estimated at 976 MMboe.

Perhaps also boosting confidence in Mexican waters, despite shaky yet improving global market conditions, is pipeline availability: two 18-in.-wide pipelines, including one design to handle between 130 Mbbl/d to 150 Mbbl/d and another designed to handle between 300 MMcf/d and 350 MMcf/d of gas, according to CNH.

Earlier that morning, BHP Billiton edged out BP Exploration for the opportunity to develop the 1,285-sq km (496-sq mile) Trion Block with Pemex, winning a 60% participating interest in blocks AE-0092 and AE-0093. Both BHP’s Mexico unit and BP placed a 4% additional royalty bid; however, BHP’s $626 million offer gave it the advantage over BP’s offer of about $600 million. Included in BHP’s bid was an upfront cash payment of $62.4 million and a commitment to minimum work program valued at up to an estimated $320 million, BHP said.

“We see attractive potential in Trion and the Perdido trend, and we are pleased to have the opportunity to further appraise and potentially develop this prospective frontier area of the deep-water Gulf of Mexico,” Steve Pastor, president of operations petroleum for BHP Billiton, said in a statement. “This opportunity aligns with our strategy of owning and operating Tier-1 assets and provides an opportunity for BHP Billiton to leverage its industry leading deepwater drilling, development and operational expertise to create value in Mexico.”

Trion, also in the Perdido Fold Belt area, is expected to produce about 120 Mbbl/d by 2025. First oil could come as early as 2022. Pemex said the development will require nearly $11 billion in investment. The minimum work plan for the field includes drilling two delineation wells, an exploratory well and acquisition of 1,250 sq km of multi-azimuth seismic. The field is believed to have about 485 MMboe in estimated recoverable resources.

Pedro Joaquin Coldwell, energy secretary for Mexico, pointed out that history was made by Pemex, which not only partnered with an international oil company for the first time but also won a tender.

“This shows that our national company can compete and win tenders. I think this is an achievement,” Coldwell said.

As part of the deepwater bid round, Mexico also offered blocks in the Salina Basin.

Four of the six blocks offered in the Saline Basin, described by CNH as holding “the largest yet to find hydrocarbons potential in North America,” attracted bidders. While the outcome of Perdido blocks went as expected, Alvarez admitted that he had some doubts about the southern blocks. Although two blocks in the Saline Basin had no takers, another block in this area generated the most interest—attracting four bidders with the winner offering 26% over royalty, he said.

Top bidders for Saline blocks, which covered 15,617 sq km (6,030 sq miles), were the Statoil, BP and Total consortium, which landed exploration rights for blocks one and three; the consortium of PC Carigali and Sierra Offshore Exploration, which won Block 4; and the consortium of Murphy Sur, Ophir Mexico Holdings, PC Carigali Mexico and Sierra Offshore Exploration, which won the fifth block tendered.

There were no bidders for blocks two and six.

Mexico’s Dec. 5 bid round followed three other tenders, including for onshore and shallow-water blocks. In all, 39 contracts have been awarded, Mexico’s officials said. The auction marked the last one for Round One.

Joaquin Coldwell also said it was very likely for non-conventional fields to be auctioned for the first time as well. 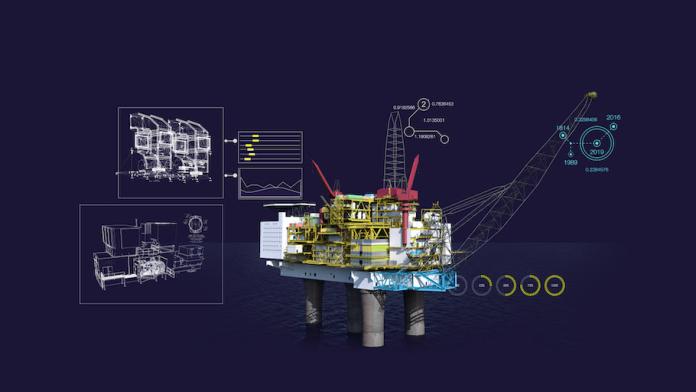 Building the Next Generation of FPSOs