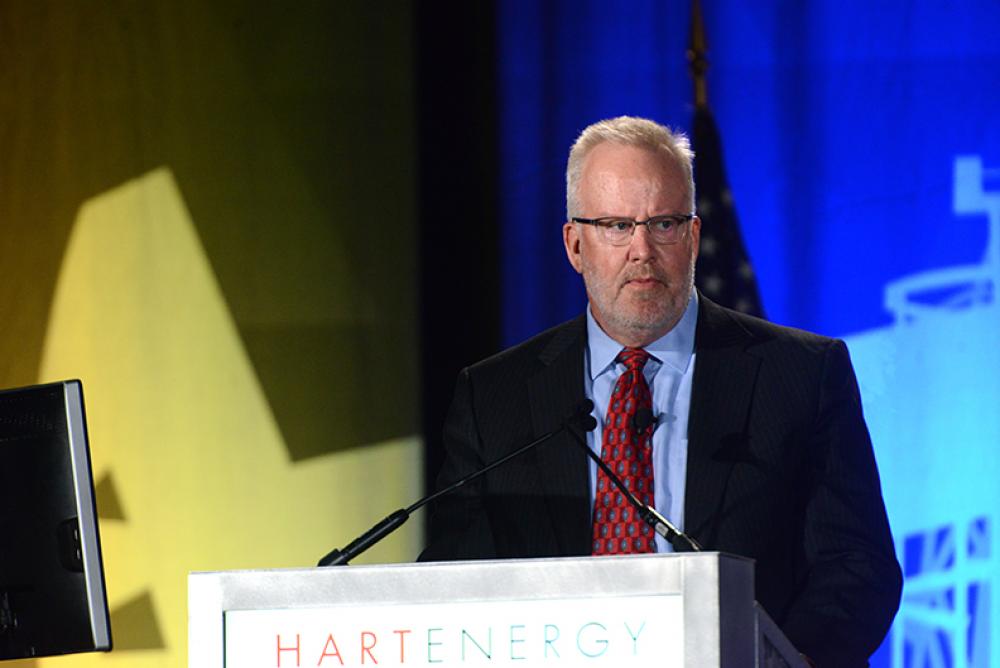 Longfellow Energy, an Oklahoma private operator, finds success in the Stack play wedged between the Woodford and Meramec shales.

OKLAHOMA CITY—Hard to believe but sometimes it does pay to not listen to the experts. Take Todd Dutton and Dallas-based Longfellow Energy, for example. Had he listened to the experts that had proclaimed in a 1973 AAPG paper that “at least 90% of the recoverable primary oil has been produced from the Sooner Trend,” the company would be working elsewhere.

Instead he finds himself leading the privately-held operator into success with its Nemaha Project that is located in eastern and northeastern portion of that very trend, now widely known for putting the “S” and the “T” in the larger Stack play.

“It’s a good thing that I didn’t listen to what the experts were saying about the future oil recovery in the Sooner Trend fields,” he recently told attendees at Hart Energy’s DUG Midcontinent Conference. “Just shows how much the thinking and [understanding of] the geology and unconventional resources has changed.”

Dutton, president of the company, shared with attendees how the company—since beginning the project in 2011—has increased its understanding of the geology of the Updip Oil Leg of the Osage Reservoir and how that knowledge has helped the company increase production and returns in the project through improvements in its completions design. The project is located along the Nemaha Fault in Garfield and Kingfisher counties spread out over 81,000 gross acres (60,500 net), covering 128 contiguous governmental sections, according to Dutton.

Understanding the unique geology of the Osage is where the company first focused its development efforts. Wedged in between the Woodford and Meramec shales, the low GOR of the Osage offers Longfellow the ability to “stack a lot of wells” in the section where it is working.

“The Woodford is the source of the oil and Osage sits right on top of that,” he said. “That means that all the oil that’s in the Meramec had to pass through the Osage [from the Woodford] to get to the Meramec.”

Dutton added that oil in the Osage is trapped in a micro-Darcy rock matrix and is, “sealed by the Meramec above and the Chester [truncation] above that. Both of which are more ductal rocks and have a higher clay content and less natural fracture. Oil saturation occurs over the whole Osage section with gas in solution, there is no free gas in the rock matrix. The Osage is composed of alternating layers of lime dominated and then quartz dominated, with quartz dominated layers having the higher proxy,” he said.

“The important point here is that the low clay content of Osage means that it is much more brittle than the Meramec and has a central vertical natural fracture. This causes a lot higher leak off during your fracture treatment.”

Understanding the fracture network of the Osage is one part of the equation. The other is the reservoir’s GOR.

“We believe you have to break new rock in order to produce the oil. The oil won't travel fast through the micro-pore system from the matrix to the fracture. Matter of fact, it moves millimeters or an inch or two per year, maximum. In rock, your fracture geometry determines the oil and gas ultimate recovery in the Stack play,” he said.

“The producing GOR reflects your fracture geometries, the intensity of the stimulation. We like to call it ‘your stimulated reservoir bottom.’ It tells you how efficiently your frack has broke new matrix rock, rather than just connecting the natural fractures,” he explained. “In solution gas reservoir, the GOR rises in all the wells over time. In the Stack play in the Osage, that rise is a function of the stimulation of efficiency, or complexity, and not the saturation of the rock itself. “Remember, with no free gas in the matrix, the produced gas that comes out of all the wells comes from breaking out the oil, leaving oil in the matrix. Therefore, to have a fast increase in GOR is not a desirable as it indicates poor fracture geometry and that there’s a large pressure drop. The gas breaks out and the oil stays in.

“If your completion can achieve a low GOR production, then it means that you can stack more wells in a section and get where the oil recovery is,” he said. “And that’s really important to us for future in-fill development.”

The company’s generation three completions design used with its 2017 wells builds on the data and lessons learned in the early days of the project.

The company has 104 horizontal lateral wells drilled and producing, with seven planned for the Osage and one for the Oswego reservoir to be drilled in 2017, he said. The average number of rig days for the Osage wells is 17, he noted.

As for its generation three completions design, the company has performed six plug and perf completions using swellable packers and a high viscosity slickwater paired with a proppant mesh size of 100m and 30/50w loaded at 1,730 lb/ft. Average lateral length is 4,475 ft with 31 stages spaced out 141 ft, according to Dutton’s presentation slides.

“We believe that ramping proppant quickly to a higher concentration is critical to divert out of, and away from, the natural fracture system, so that you can build net pressure and break new rock,” he said. “Breaking the new rock is the key to success. We also use a higher viscosity friction producer so that we can build pressure in the rock and not lose it to friction in the pipe and the fractures.

“We like to see increasing net pressure throughout the pumping at each stage. We don’t pump the same volume and concentration at every stage. We let the rate and pressure data tell us what the outcome and amount of proppant to use.”

For its 2017 operated and completed wells, Longfellow is seeing lower GORs.

According to Dutton, the data collected from the company’s efforts in the Osage demonstrate that it is a solid oil resource.

“The Updip Oil Leg of the Osage is a great place to drill oil wells. We get more oil with less gas and we believe that we’ve just only begun the oil recovery evolution that will make estimated recoveries and economics better in the future,” said Dutton.

2018 plans, he added, include drilling 18 parent wells and four infill pilot wells in the Osage, along with four infill wells in the Oswego. The company also plans to look at incorporating smaller proppant size and different chemical diverters in its wells in 2018.

“We also have plans to drill a two-mile lateral,” he said. “And we’re looking forward to achieving even better results with our 2018 drilling campaign.”