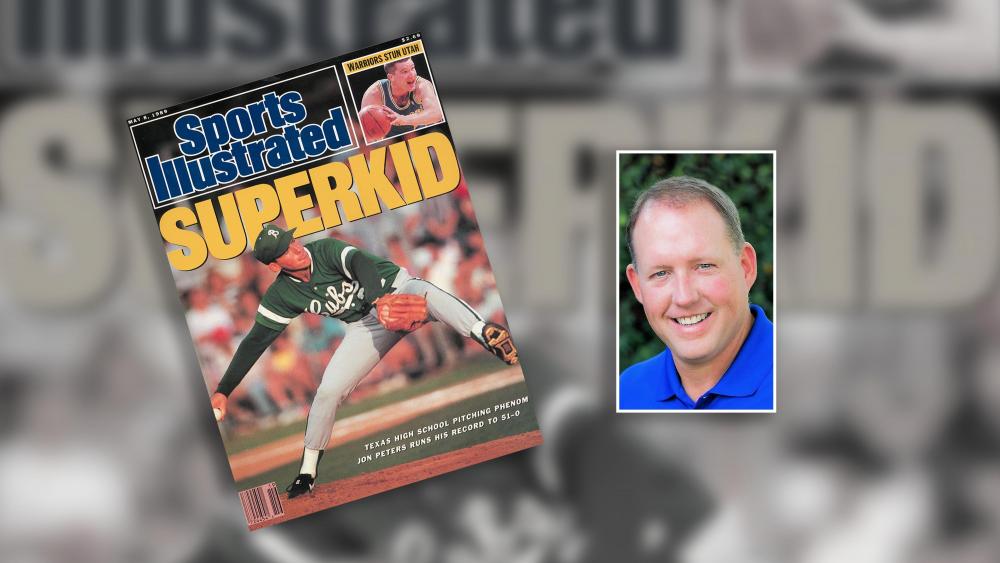 As the days of spring grow longer and the grass turns green, a young man’s attention invariably turns to his first love: the game of baseball.

Such was the life and early legacy of Jon Peters. During the late 1980s, everyone in the state of Texas with the slightest interest in baseball knew of the Brenham High School phenom. He was the country’s top schoolboy pitcher. Before he would hang up his spikes, he would lead his Cubs to three state 4A championships while setting a national record for high school hurlers for most consecutive wins with 53. That record still stands.

What made that stand out was that a year earlier it was thought that he had broken the record at 33, only to learn that a kid from South Carolina held the record with 50. It made no difference as Peters broke that record a year later and in doing so became the cover boy on the May 8, 1989, issue of Sports Illustrated, the first high school baseball player so honored.

The future was unlimited, or so it seemed to everyone but Peters. The successes he earned from the diamond were overwhelmed by his lack of inner peace as someone who always felt that he never fit in and just wasn’t good enough.

“I never shared my feelings,” says Peters, the second of two sons of his middle-class family. “It would have been better if I had shared.”

A series of arm and shoulder injuries led to a physical decline that ended any thought of a pitching career. A drinking problem began in college, and combined with his self-esteem issues, led to an emotional decline that would cost Peters his first marriage and nearly lost his life in an auto accident. Finally, a new-found spiritual faith enabled him to reverse his life. He says he hasn’t had a drink since Sept. 7, 2010, when he began his second rehab. It was a promise he made to himself on his 40th birthday.

Peters has written and self-published “When Life Grabs You by the Baseballs, Finding Happiness in Life’s Changeups.” It is not an easy read as Peters candidly details his downfall and his ultimate recovery. It is also inspiring.

Today, Peters works as business development manager for EPIC Management Resources LLC, a Houston-based energy services company that specializes in pipeline inspection and project management. EPIC helps companies that prefer to hire contract employees. It can also do pipeline project management such as recommending construction companies, putting out bids for their client and handling scheduling and engineering, Peters explains.

We are having a late morning breakfast at a popular diner on the outer edge of Houston’s expansive Energy Corridor. A cheerful, sturdily built man now 48, Peters bears a resemblance to the great athlete of his past. He still loves baseball and attends a game whenever possible. Peters has a good reason to be smiling, having just returned from a weeklong Costa Rican honeymoon with his second wife. He has a son, 12, and a daughter, 14, from his first marriage.

Secure and at peace with himself, Peters wants no topic to be off-limits during our interview. So, I ask what prompted him to write such a revealing book, one that has received excellent reviews.

“It was 2010 when I got sober. From then until 2014 I tried to figure out what I wanted to do. I was still in that mindset of I don’t know what I want to be. In late 2014 I had a tug in my heart to do more. I felt that God was telling me I had some experiences, talents and abilities and wanted me to do more.

“I started journaling and through that process I developed a lot of freedom. I would write down what was going on in life, what I was feeling, and people that I was praying for. Periodically, I would go back and read the past journal entries I had made. That enabled me to go back to my past and see who I was praying for, and what was going on with them now. I often would find they were doing well, that God had answered my prayer.”

He decided to write a memoir and eventually connected with Kary Oberbrunner, a former pastor familiar with publishing, who became a mentor during the writing process.

Peters was also amid a major career decision, moving from the insurance business where he had worked for 16 years, to the energy industry. How did that come about?

“EPIC was my client and had some very good people,” Peters says. “We all jelled. I told them that if they ever had an opening to let me know. I was visiting one day about their insurance renewal when I heard they hired a business development person but didn’t feel it would work out. Later that day I wrote a note to their CEO that said on the signature line, ‘Jon Peters: Your Business Development Solution.’ EPIC says they’re the product management solution.”

Within five minutes of emailing that letter, Peters got a call asking if he was serious. He was. After a background check he began his new career a week later in an industry he admits he knew little about.

“I really didn’t know much of anything, but they insisted they could teach me, and I had an interest in learning,” Peters says. Besides, his insurance work had also involved business development and the concept behind both share a basic similarity: sales. It also helped that he never pretended to be an expert. The new challenge would be trying to work into a company that had already been using another company for years, or perhaps felt they were fine just the way they were.

The periodic volatility of the energy business is one adjustment he has had to learn to adapt to.

“When I started, oil prices were at $96 a barrel. I’ve never seen them go above that, so it’s been kind of a wild ride. There’ve been times I’ve jumped up and said [laughing] I guess I’m just bad luck. But no, I’ve never had second thoughts about moving into the oil and gas industry. It all has to do with the people at EPIC because I enjoy working with them.”

At the end of the day, when he returns to his home in the Houston suburbs, Peters ponders whether it was a successful day.

“Have I met with many industry contacts? Did I make new contacts? Did we pick up any MSAs (master service agreements)? Did I learn about new projects that are up and coming? Because it’s all about the pipeline for us, so we can schedule our year,” he explains.

One lesson Peters says he’s learned is that it is often harder to do business when times are good.

“The reason I say it’s probably harder is that during a downturn, with all the turmoil in the industry, it seemed I was able to maintain contacts and develop relationships a lot more than during good times. Some business development guys may feel down and not work as hard, but we always thought that if we can develop new contacts during this downturn, when things get good, it’s going to be real good.

“What also makes it easier during the downturn is that they’re seeing you on a consistent basis. When times get good, everybody is knocking on everybody’s door. But you had their attention,” Peters says.

He also suggests that his work and life in general, offer a realistic parallel to baseball. “If I look at the energy industry, we’ve got teamwork and competition. Sometimes you strike out, sometimes you hit a home run. I get on the phone with somebody and it’s a good conversation, it’s a strike. I’ll call ten people and I won’t get anybody. That’s an out.

“I think baseball and sports in general lead to more aggressiveness, competitiveness: I want to win here. If you’re hitting .300 in this industry, you’re doing real well.”

Peters is also willing to share the life lessons learned during his 48 years with coworkers and clients.

“I’m a lot more patient these days as opposed to the past when I wanted everything to happen right now. I just think it’s maturity. I know things may take a little longer. With me being more vulnerable and open about if I screw up at work, I’ll admit it. It encourages others to be vulnerable. I’ve been able to really connect with other people. It’s either you like me or you don’t. That’s okay. I’m not going to try to fake who I am.

“I’m usually real positive, and I know that a lot of people appreciate that,” Peters adds. “Especially during the downturn, people tend to be negative. I tell them ‘hey guys, we are going to come out of this sometime. It’s not the end of the world’.”

He also offers another parallel for a young person seeking a career in baseball or in the energy business.

“Speaking from experience in both, find someone who will mentor you, be willing to learn and to start at ground zero. Learn as much as you can. I’m still learning. Be honest what you don’t know and don’t go in pretending you know what they’re talking about. Ask questions, ask for help. They knew I didn’t know.”

Jon Peters acknowledges that the recovery process is a lifelong discovery. Sometimes at work people are curious why he doesn’t drink.

“It’s definitely one day at a time, sometimes it’s one minute at a time. But surprisingly, it’s been very easy. If I’m God-centered, then I’m fine. If I’m trying to run the show myself, who knows what’s going to happen?”

As our interview concludes, Peters takes a deep breath. He’s not quite ready to go because there remains something to be said. It’s the real legacy he wishes to leave behind.

“You asked earlier how I decide whether I’ve had a successful day. Did I do enough to help someone that day? Did I help make his life a little better? That’s what’s really important to me.”

Jon Peters is also a motivational speaker. He can be reached at JonPeters.org.

2022-09-09 - Line 5 oil pipeline is allowed to continue to operate because of public and foreign policy implications.

2022-09-27 - Ugandan President Yoweri Museveni said the European Parliament's urging of TotalEnergies to delay pipeline development and explore an alternate route was "a wrong battleground for them" at a recent conference.

2022-10-14 - Freeport LNG's previous deadline for completing the fourth liquefaction train was in 2026, but the company said it would take approximately 48 to 56 months, making the deadline impossible.