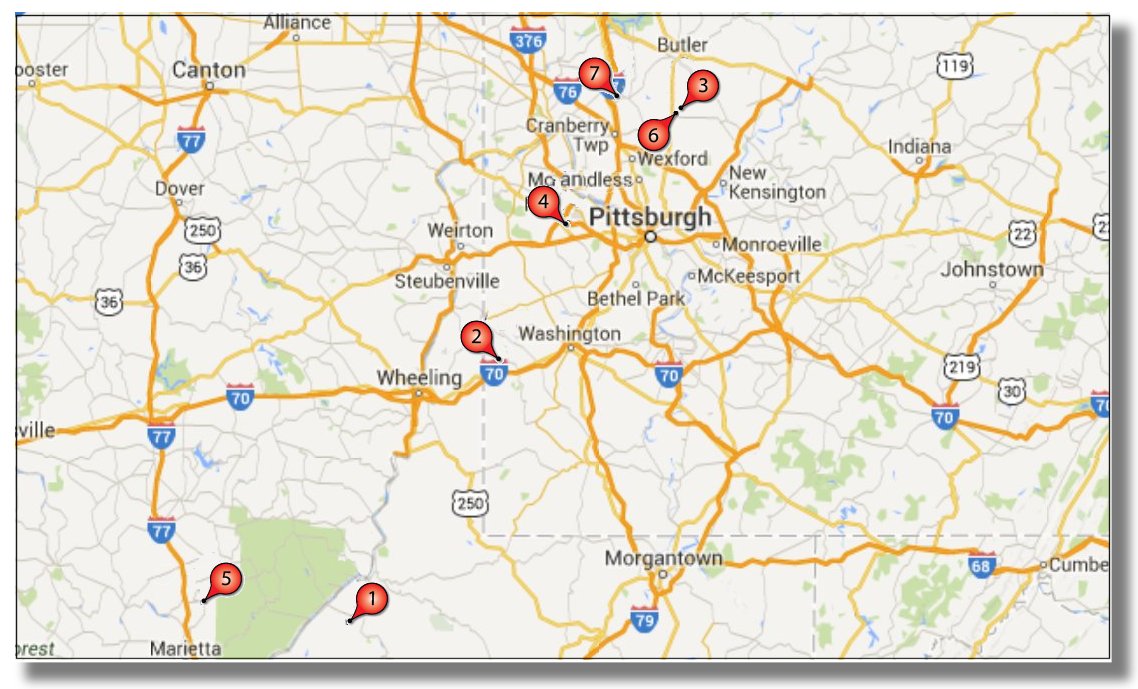 Following the drop in oil and gas prices, a number of operators are reducing their 2015 exploration budgets, which includes the Marcellus Shale gas play.

EQT’s newest development area is in northern West Virginia, in a dry gas portion of the Marcellus Shale play. The operator holds the drilling rights to around 32,000 acres in the area and intends to drill nine wells in northern West Virginia during 2015. With its continued focus on the Marcellus Shale, EQT achieved record production sales volume of 476.3 billion cubic feet equivalent for 2014, a 26% increase over 2013. Approximately 79% of total production sales volume was from Marcellus wells.

According to Fort Worth-based Range Resources Corp., a Utica Shale horizontal well in Washington County, Pa., initially flowed 59 MMcf/d of gas. The #11H Claysville Sportsman’s Unit is in Section 7, West Middletown 7.5 Quad, Donegal Township. After drilling the vertical pilot hole, the venture was drilled to 18,742 ft from an existing Marcellus Shale pad and has a true vertical depth of 11,693 ft. It was completed in a horizontal lateral after 32-stage fracturing. The well will remain shut in for approximately 90 days while facilities are completed.

Rex Energy Corp. announced results from a Butler County, Pa., Marcellus Shale test, #1H Reno. The horizontal well was placed into sales and had an average five-day rate of 10.6 MMcfe/d with 38% liquids (assuming full ethane recovery). The total depth was not announced. The well is producing from a 4,150-ft lateral and was completed in 28 stages. The Butler, Pa.-based company also announced results from its nearby, five-well Ferree pad. The company’s second test of a stacked Upper Devonian Burkett/Marcellus was placed into sales in late 2014. The five wells on the pad were drilled with an average lateral length of 5,500 ft and completed with an average of 33 stages. The wells produced at an average five-day sales rate per well of 8.3 MMcfe/d with 55% liquids (assuming full ethane recovery). Preliminary analysis does not indicate any communication between the Upper Devonian Burkett and Marcellus Shale. The company continues to monitor the effects of the stacked laterals.

According to IHS Inc., Consol Energy Inc. has started drilling the first of up to 45 Marcellus Shale wells on Pittsburgh International Airport property in Allegheny County, Pa. The initial well, #2C ACAA, is about two miles south of the airport’s runways and has a planned depth of 10,084 ft (5,999 ft true vertical). The horizontal well is expected to bottom to the northwest. Some of the horizontal wells to be drilled from the pad have proposed laterals of more than 10,000 ft. Canonsburg, Pa,-based Consol initially intends to drill 45 Marcellus Shale wells on the airport property, but the company also plans to explore other horizons, including Upper Devonian (Burkett) and Utica Shale. Given the stacked pay potential on the approximately 9,000 acres held by Consol on airport land, the company estimates the acreage has a resource potential in excess of 1.6 Tcfe of gas.

According to IHS Inc., Magnum Hunter Resources Corp. and EM Energy Ohio LLC have formed a partnership to jointly develop Marcellus and Utica shale acreage in Washington County, Ohio. Terms of the new agreement include Magnum Hunter subsidiary Triad Hunter LLC and EM Energy collectively working together within the contract area on the Merlin and Haynes pads in Washington County. The Merlin pad includes 620 acres in Washington County. The #8PPH Merlin and #10PPH Merlin will be drilled from offsetting surface locations. Following the drilling of separate 8,300-ft vertical pilot holes, #8PPH Merlin will be horizontally drilled to 14,500 ft while #10PPH Merlin will reach 15,560 ft. Each planned Utica Shale venture has an approximate 1.5 mile long lateral. The companies expect to begin drilling in late 2014 on the planned Haynes pad, which includes approximately 460 acres â€“ one Marcellus Shale test and a deeper Utica Shale well are initially planned. Houston-based Magnum Hunter’s Appalachian Basin acreage includes 106,000 acres prospective for Utica Shale and another 79,000 acres for Marcellus Shale.

In Butler County, Pa., Rex Energy Corp. is drilling the first of several planned horizontal tests on the company’s Ferree pad. The #1H Ferree Unit is underway and has a planned depth of 13,333 ft, 6,082 ft true vertical, and is the first of two stacked Upper Devonian Burkett/Marcellus Shale tests planned for 2014. The State College, Pa.-based company added a second rig to its drilling program and plans to drill four pads during 2014 with at least five wells per pad. Drilling is also underway at the second of three wells on the Shipley pad. These wells are expected to be drilled with an average lateral length of 5,800 ft with 600-ft spacing between the laterals. For the remainder of 2014, the company expects to utilize two full-time rigs to drill 40-45 wells in the county. In addition, Rex is completing its three-well Schilling pad. The three Butler County wells were drilled with an average lateral length of 5,800 ft, which is the longest average lateral length of any combination of wells drilled in the area.

Rex Energy Corp. has completed several horizontal wells drilled from the company’s six-well Baillie Trust pad in Butler County, Pa. According to IHS Inc., wells drilled from the pad were brought online at an average five-day sales rate per well of 5.9 million cu. ft. of gas equivalent per day (52% natural gas liquids, 47% gas, 1% condensate), assuming full ethane recovery. The #5H and #6H Baillie Trust were drilled into Upper Devonian Burkett shale in a vertically offset stacked position above #2H and #4H Baillie Trust, which were drilled into Marcellus. Two other Marcellus wells were drilled from the pad, #1H and #3H Baillie Trust. The six wells on the pad were drilled to an average total depth of 10,252 ft. with an average lateral length of 4,337 ft. The wells were completed with an average of 29 stages. According to State College, Pa.-based Rex, the Baillie Trust pad is the company’s first attempt to test vertically offset stacked lateral wells in the Marcellus and Upper Devonian from the same pad. In addition, the company tested the potential downspacing of its Marcellus shale locations by drilling two pairs of Marcellus wells laterally, spaced 600 ft. apart, as opposed to early spacing of 750 ft.