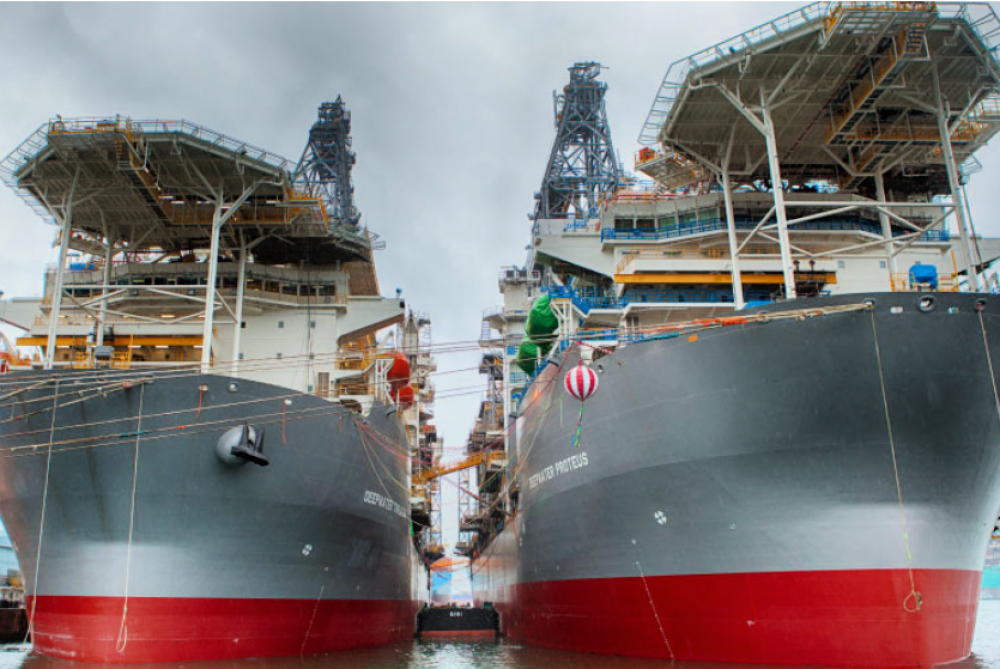 News of the FID was announced alongside the award of a $225 million contract to Transocean Ltd. for its newbuild ultradeepwater drillship, the Deepwater Atlas. (Source: Transocean Ltd.)

Beacon Offshore Energy’s Shenandoah development in the U.S. Gulf of Mexico received project sanction on Aug. 25, which, once onstream, analysts project will be transformational for the privately held E&P company.

“All eyes will be on Beacon as it executes the 20,000 psi project,” commented Mfon Usoro, senior research analyst at Wood Mackenzie, in an emailed statement on Aug. 26. “We have seen other smaller companies like LLOG take on successful Paleogene projects including Buckskin.”

Once onstream, earmarked for 2024, production from Shenandoah is expected to catapult Beacon from its current position as the 20th-largest producer in the U.S. Gulf of Mexico to the 10th spot, according to Usoro.

Located 160 miles off the coast of Louisiana in the Walker Ridge area of the U.S. Gulf, Shenandoah was originally discovered by Anadarko Petroleum in 2009. Since then, the project has changed hands several times, most recently through the sale of LLOG Exploration Co. LLC’s stake in the development to Beacon last year.

In addition to Beacon, Shenandoah is co-owned by an affiliate of Navitas Petroleum and HEQ Deepwater—a partnership between Quantum Energy Partners and Houston Energy that recently acquired a working interest in the project.

Usoro noted that HEQ Deepwater stepping into the Shenandoah project was not surprising as Wood Mackenzie, a Verisk company, suspects a dilution of ownership before or at final investment decision (FID) to help reduce Beacon and Navitas Petroleum’s cost burden.

“The Shenandoah joint venture secured funds to the tune of $900 million for the first phase of development, highlighting our view that even with net-zero goals, both oil and gas companies and the global capital market still see value in high-return, low-emission oil and gas projects,” she said.

“We estimate a rate of return for Shenandoah at 37% and carbon emissions intensity in the U.S. GoM is one of the lowest worldwide.”

News of the FID was announced alongside the award of a $225 million contract to Transocean Ltd. for its newbuild ultradeepwater drillship, the Deepwater Atlas.

The Shenandoah program comprises two phases, which includes the installation of a 20,000 psi BOP on the rig, making it Transocean’s second asset with a 20,000 psi-rated well control system.

Developing Shenandoah, however, will be challenging, Usoro said.

“The FID of Shenandoah represents another milestone in the 20,000 psi journey, following Chevron sanctioning Anchor, the GoM’s first ultrahigh-pressure field, in 2019,” she said.

“We understand Beacon has an operations team with strong technical expertise, but deploying a new technology carries a higher risk,” she continued. “Although the company has safely and successfully drilled sub-salt Miocene-aged wells, it has not drilled any Paleogene-aged wells.”

Further, Usoro added that the project sanction for Shenandoah unlocks growth opportunities in the U.S. Gulf of Mexico, which she believes remains an attractive basin for investment and expects more FID announcements later this year.

“The arrival of the Shenandoah semisubmersible facility will breathe life to the Western Walker Ridge area,” she said. “Three discoveries with combined reserves in excess of 300 million barrels of oil equivalent—Yucatan, Coronado and Monument—now have a higher chance of commerciality.”