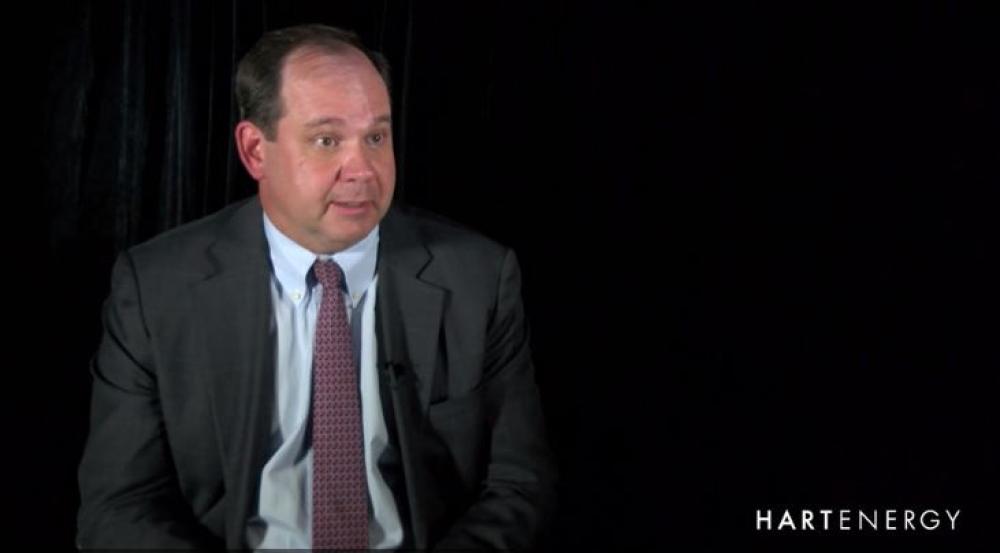 The Houston-based company revealed the Delaware Basin discovery, which is the same geologic age as the Arkoma Woodford and Scoop/Stack, in September 2016. Since then, Apache’s 307,000 net-acre Alpine High position has grown to 366,000. Exploration efforts focused on the Woodford and Barnett, which combined were estimated to have in place a combined 75 trillion cubic feet of gas and 3 billion barrels of oil, have expanded to the Pennsylvanian, Wolfcamp and Bone Spring. The number of drilling locations swelled from about an estimated 2,500 to more than 5,000 as interest remains high and competition heats up.

“We have made remarkable progress in a little over a year since we announced Alpine High. Just six months after breaking ground on our gathering, compression and processing infrastructure in November, we achieved first sales in early May,” Christmann said, noting that was two months earlier than planned. “We subsequently exceeded both our June production target of 50 million cubic feet per day, and just recently, our September target of 100 million cubic feet, net to Apache.”

Many were pleased to receive details, given the competitive nature of the business.

“Overall, we believe this level of granularity should be generally welcomed by investors given the relative lack Alpine High industry data points to date—APA’s current 336K acre position (+9% vs. 307K last September) essentially covers the entirety of the play, and APA has previously hesitated to relinquish such detail citing competitive purposes,” Seaport Global Securities said in a note. “That said, given the polarizing nature of the play, we believe [the Oct. 9] update should receive a mixed reaction from two distinct groups of investors.”

The analyst said believers of the play will be “encouraged by indications of improving economics, including stronger well results,” notably gross IPs from six wet gas wells and efficiency improvements. However, “we would expect doubters of the play to continue to question the sample set of well results provided to date (which exclude some rates from experimental/test wells), and APA’s confidence in a repeatable oil development as the company has only drilled five parasequence wells (Wolfcamp/Bone Spring).”

So far, Apache has drilled more than 70 wells on Alpine High, which Christmann said enables the company to “geographically and stratigraphically delineate the play and confidently high-grade our acreage position.”

The play has been divided into three settings:

Northern Flank: Most of Apache’s work has been carried out in this area, where 54% of the play’s wells have been drilled. That’s not necessarily because the acreage here is better quality or more prospective, according to Christmann. “This area contains many of our initial leases, which have the nearer-term expirations.” It’s also the site of infrastructure buildout.

Source intervals include wet gas and dry gas with the thickest section prospective for the Wolfcamp and Bone Springs parasequences.

Crest: This area comprises about 16% of Apache’s Alpine High acreage and is where 32% of the wells have been drilled. It’s mostly wet gas with portions of potential source rock in the oil window.

Southern Flank: About 28% of the Alpine High acreage is in the Southern Flank, the site of 14% of wells drilled to date. This area lies mostly in the wet gas and oil windows, he said.

“The source rock, which comprises the Woodford, the Barnett and the Pennsylvanian, is a very consistent, predictable and contiguous deposition, like that seen in most other true resource plays,” he said. “There is very little in-situ water, as the rock is saturated with hydrocarbons. As previously demonstrated the source interval encounters all three hydrocarbon-phases: oil, wet gas, and dry gas, at various points across the play.”

Most of Alpine High appears to be wet gas.

“The weighted average typical Alpine High wet gas well is estimated to produce 13.3 Bcfe of hydrocarbons, of which 6% is oil,” said Tim Sullivan, executive vice president for Apache. “The recoverable oil volume is 130,000 barrels per well and 455 million barrels of oil for the entire project, based on 3,500 wet gas locations. This would yield a 13.4% recovery factor on the 3 billion barrels of the stated original oil in place.”

He added that a typical well generates between $5 million and $8 million of NPV. But an upper range well could generate as much as $19 million of NPV. 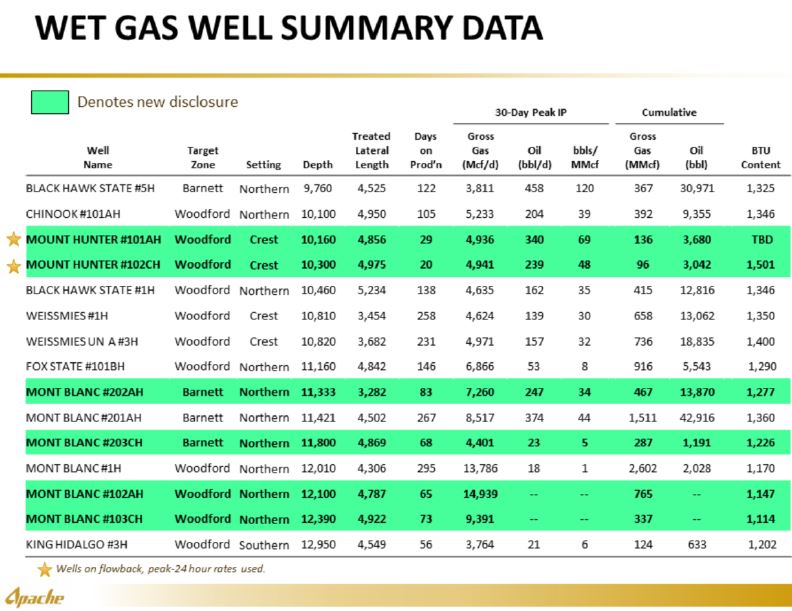 Only five wells have been drilled in Alpine shallow oil play, Sullivan said. He called the parasequences, which comprises the Bone Springs and Wolfcamp formations, “much more complex, discontinuous and contain many different rock types.”

“Although there remains much more work to fully understand this interval across our entire acreage position, we can safely say that we have at least 500 economic well locations at this time,” Sullivan said. “Given the thickness, areal extent and number of potential targets, we are confident that our location count will increase over time.

“We have just scratched the surface in exploring this resource,” he added. “We are excited about what we have learned and the tremendous upside potential this play holds.”

Yet as with any play, there are geological and drilling risks. For Alpine, deep-seated faults that could impact well performance and potential seal integrity issues as well as geologic complexity involving groundwater flows that form natural springs around Balmorhea.

Christmann pointed out that Apache’s location counts “have never included any wells in these areas.”

The future holds more testing on Alpine High as Apache gears up for more spacing and pattern tests and testing new landing zones—10 have been proven already (three in the Woodford and Wolfcamp; two in the Barnett and one in the Bone Spring and Pennsylvanian).

Apache will also work to optimize lateral length and completion designs and conduct additional oil tests in the parasequences and shallower source intervals. Laterals are currently averaging about 4,400 ft.

Apache hopes to bring eight more wells into production by year-end 2018, further increasing volumes. “This assumes that startup of our Hidalgo central processing facility occurs in December as expected and does not slip into next year,” Christmann said.

“Notably, by May 2018, which will be our one-year anniversary of first production at Alpine High, this play will have completely replaced the approximate 50,000 barrels of oil equivalent per day of production that we divested when we exited Canada this year,” he added. “Importantly, the margins on our Alpine High production will be significantly higher than our margins in Canada.”

Here’s a quicklist of oil and gas assets on the market including a Midland Basin royalty position plus a Grenadier Energy Wolfcamp Shale Permian Basin package and an IOG Oklahoma STACK nonoperated opportunity.

Boulders Royalty Corp. retained Detring Energy Advisors for the sale of its oil and gas mineral and royalty interests located in the Permian Basin in northeast Culberson County, Texas.

A private seller is offering for sale its oil and gas mineral and royalty interests located throughout the active core of the prolific Midland Basin in the Permian across Ector, Glasscock, Martin, Midland, Reagan and Upton counties, Texas.