Ocean-bottom nodes (OBNs) are autonomous seismic recording devices that have been in large-scale commercial use since 2004. Each node incorporates seismic sensors, digital recording electronics, a precision clock, a data storage medium and a power source in a compact pressure vessel that will couple well with the seabed and is capable of operating in water depths of up to 3,000 m (9,843 ft). OBNs were initially conceived to replace shallow-water ocean-bottom cable systems where fixed interval constraints, terminations, connectors, power distribution and data telemetry led to significant technical downtime and operational inefficiencies. Deepwater operators faced with the challenge of imaging subsalt reservoirs quickly recognized node technology as a superior method to deliver the production seismic necessary to optimize development and recovery strategies.

Deepwater nodes are typically deployed on the seafloor in a sparse receiver grid. After synchronization of each node’s internal clock with a GPS reference time signal and starting the digital recording of sensor data, nodes are deployed by an ROV. They are designed to record seismic data (hydrophone and multicomponent geophone) continuously for months, during which time active seismic sources are towed at the sea surface, illuminating the subsurface with a much denser grid of source points. The recorded data quality is usually excellent because of the low ambient noise level at the deep seafloor and because the nodes are stationary. Upon node recovery (also by an ROV), continuous data from each node are downloaded and can be parsed into traditional seismic records using the precise knowledge of the active source excitation times.

A typical two-vessel deepwater OBN operation is depicted in Figure 1. A layout and retrieval vessel with back-deck node handling and ROV capability lowers nodes to the seafloor. The ROVs deliver nodes to their preplanned positions on the grid using an acoustic/inertial navigation capability. After a sufficient node array has been deployed, a dual-source vessel begins acquiring the dense grid of source points. 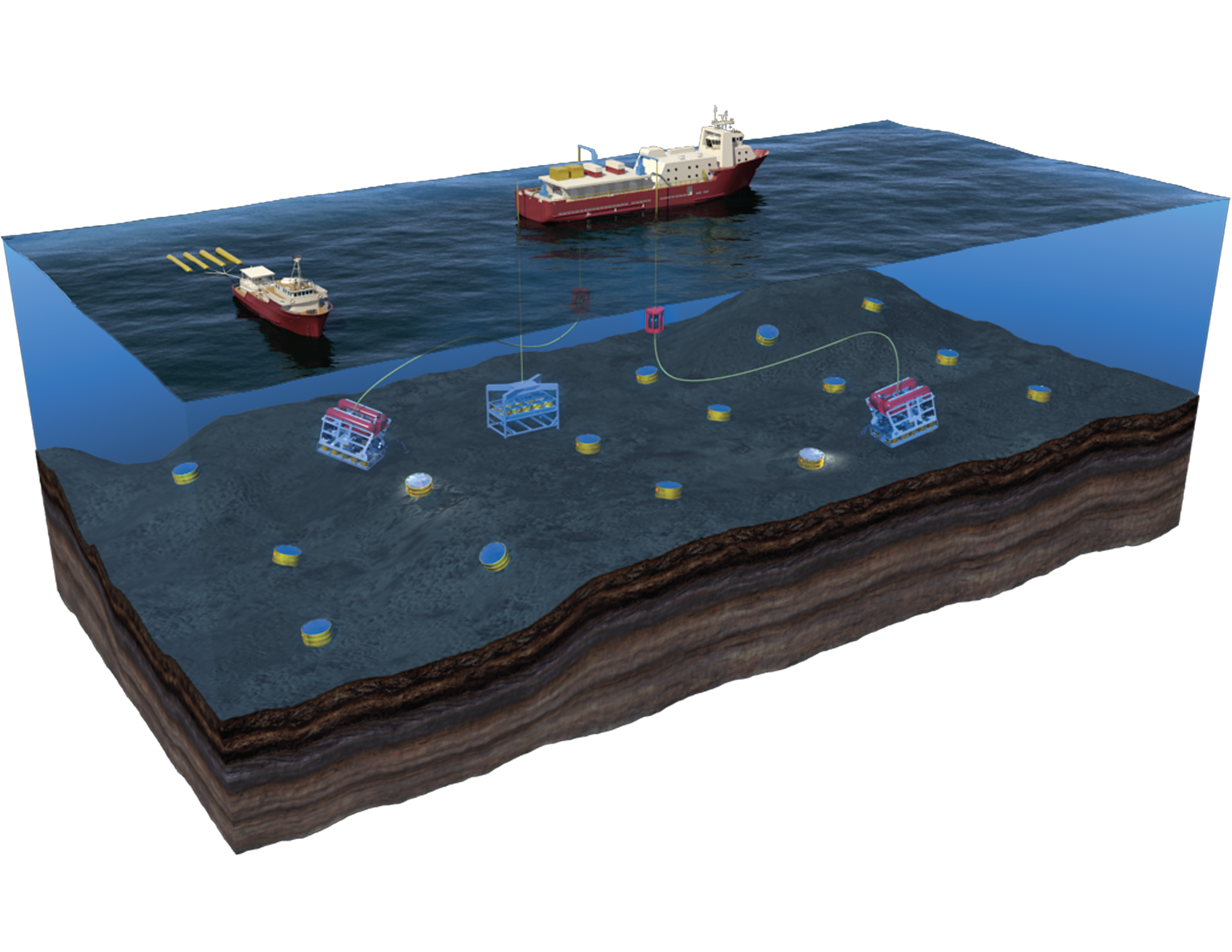 FIGURE 1. Deepwater nodes are typically delivered to the seafloor with a high-speed loader and subsequently transferred to an ROV for deployment on a sparse grid. The sources are activated on a dense grid as soon as a sufficient number of nodes have been deployed. (Source: FairfieldNodal Inc.)

In deepwater field development the seismic objective often involves 3-D imaging beneath complex overburden, particularly below and around salt, where illuminating a formation of interest can be highly sensitive to the direction (azimuth) and distance (offset) of the source point relative to the node location. To optimize the imaging beneath complex overburden, OBN surveys are designed to illuminate the target area from all azimuths and to do so continuously in offset out to a maximum distance suitable for the survey objectives (~ 8 km to 10 km [5 miles to 6.2 miles] is typical, but significantly more offset is possible). Nodes are deployed over a key area of interest, and the source point grid is a superset of the node area. The source grid is typically large enough so that every image point in the node area is illuminated continuously in offset by source points out to at least 6 km (3.7 miles) in all directions. In Figure 2 OBN data acquired with a full-azimuth geometry are used to image deep subsalt targets in the Gulf of Mexico (GoM). 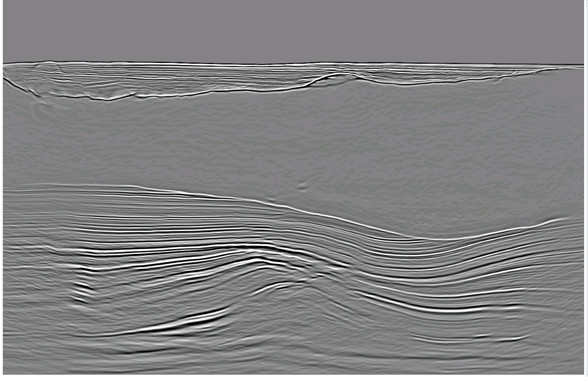 Improved subsalt imaging with full-azimuth and long-offset OBN data has been well documented. Also, in zones away from the salt, the full-azimuth illumination can produce a clearer, more interpretable image by better multiple attenuation through more diverse ray paths.

OBNs also are well suited for deepwater field development because they can be deployed among the surface and subsurface infrastructure of a working oil field, where access with wide-azimuth towed streamers is difficult. Node deployment, retrieval and seismic sources can proceed concurrently with other simultaneous operations in an active field. In most cases, node deployment among oilfield infrastructure is achievable with only minor deviation from the regular grid and with few gaps in receiver coverage. The node handling vessel remains outside any exclusion zones, but the ROV can work in proximity to any subsea or surface obstructions.

Seismic reservoir monitoring, also known as the 4-D or the time-lapse seismic method, is a powerful tool for field development. Of the 25 GoM OBN surveys that have been conducted in the last 10 years, most have been located in water depths greater than 1,000 m (3,281 ft), and many have one or more monitor surveys in addition to the original baseline survey. By repeating a seismic survey on an interval that can vary from a few months to a few years and measuring the change in seismic response in amplitude and time between surveys, reservoir properties such as volumetrics, lithology, continuity and connectivity can be inferred. For reservoir monitoring it is very desirable that the seismic acquisition be as repeatable as possible so that small changes in the seismic response that are truly related to field production (or water injection or any other external stimulus) are not obscured by changes that are related only to differences in receiver and source positions between the two surveys. Historically, towed-streamer surveys struggled with the repeatability of receivers because of variable current and wind conditions and the addition of surface obstructions over the life of the field.

OBN surveys are very repeatable, making them a more viable solution for 4-D seismic analysis. In 2,000 m (6,562 ft) of water, statistics show that about 90% of nodes can be relocated to within about 5 m (16 ft) of their prior location, and about 98% can be located within 10 m (33 ft). The normalized root mean square (NRMS) ratio, the normalized average change in seismic amplitudes between baseline and monitor, is a common quantitative statistic to measure seismic repeatability. When measured outside the producing reservoir zone, a small background NRMS value indicates a well-repeated survey. At the producing formation it represents the strength of the 4-D signal. For repeated deepwater OBN surveys in the GoM operators have reported characteristic background NRMS values as low as 5%.

Nodes also provide a scalable solution for reservoir monitoring. Studies have shown that the 4-D signal associated with water injection is readily identifiable with only about one-quarter of the number of nodes that are needed for full-field imaging, even when reservoir targets are near salt or beneath salt and require through-the-salt imaging. Subsets of the full-fold and full-extent baseline survey can be used to carefully design the optimum reduced scale monitor surveys so that clear subsalt 4-D signals can be obtained with a reduced node count. When the seismic response change can be measured in a target area of interest with a subset of the number of original nodes, subsequent 4-D surveys can be acquired at lower cost, enabling frequent monitoring of reservoir integrity, injection rate optimization, waterflood effectiveness and pressure maintenance.

The design flexibility that nodes provide also might benefit large-scale deepwater OBN surveys. Recent studies have shown that typical node spacing of 400 m (1,312 ft) can be increased to as much as 800 m (2,624 ft) with little adverse effect on the final processed image as long as high-quality 3-D angle gathers can be constructed from the sparse node dataset. Angle gathers play a critical role in the iterative velocity model-building necessary for subsalt imaging. Spacing the nodes farther apart has important implications for widening angles of illumination for improved subsalt imaging and waveform inversion, imaging larger areas more efficiently given a fixed node inventory and potentially acquiring deepwater node data at exploration scales.

Deepwater OBN technology continues to evolve. New nodes with extended battery life and optical and acoustic communication systems for data download will be a low-cost, reliable alternative to entrenched cabled permanent reservoir monitoring (PRM) systems in deep water. These autonomous reservoir monitoring systems have no cables or trenching, no ties to production facilities, small environmental impact, and ease of flexibility and scalability if development plans change, and they can be easily decommissioned. Deepwater reservoir monitoring with nodes will have commercial benefits over cable-based PRM systems by providing the same high-quality 4-D seismic data at lower cost.