A drone capable of both flight and underwater operations on the same mission could streamline future offshore oil and gas inspection activities.

Cracking the technology that allows a robot to conduct both aquatic and aerial operations on a single trip has been tough. A newly developed drone would be able to fly to an offshore asset, submerge to conduct underwater inspections, and return to base or fly to a new destination.

The hardware, however, is only one component of the technology solution. Software and cloud operations both make crucial contributions to the drone’s capabilities.

According to SubUAS CEO Javier Diez, most people thought it was either impossible for a single robotic unit to carry out both aquatic and aerial operations, or it would only be possible with a lot of trade-offs. SubUAS’s Naviator relies on hybrid aquatic and aerial technologies, he said.

“It looks very simple,” Diez said. “But there’s a lot of amazing technology that makes this operate in both water and air.” 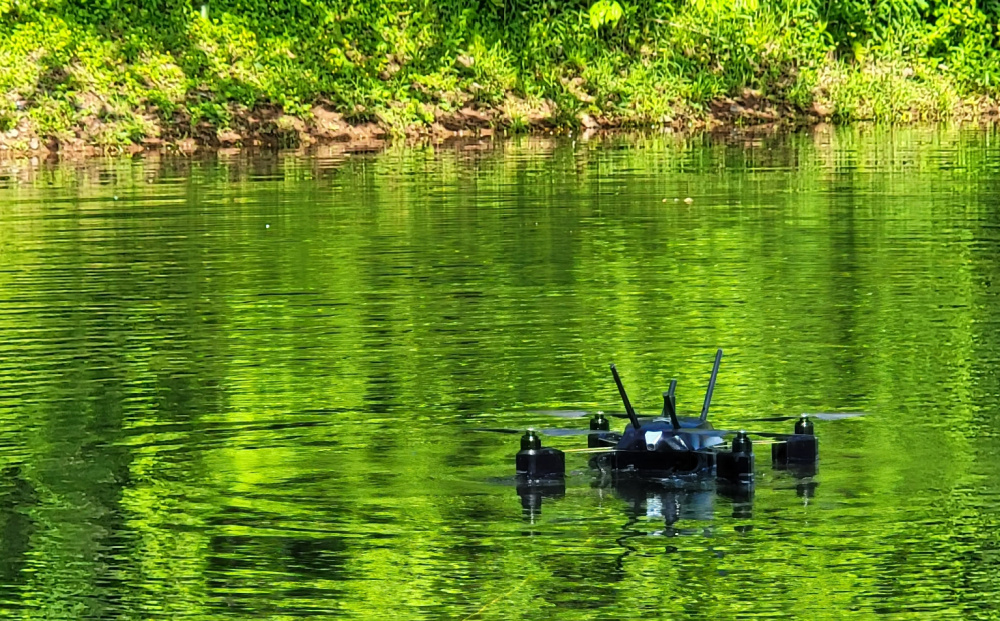 He said three main technological breakthroughs made the Naviator possible. The first and hardest, he said, is a propulsion system that works both in air and water.

“We took inspiration from animals that can fly and those that can swim,” such as ducks and flying fish, he said. “All these animals can do one very well, and one not very well.”

The goal was to develop a single propulsion system that did both equally well, he said.

“In this case, we probably beat nature,” Diez said. “We can operate equally well in both mediums.”

In fact, he said, the propulsion technology used for the Naviator is similar to that being used for the Mars Ingenuity Helicopter, which is designed to operate in a thin atmosphere.

While underwater, the Naviator operates autonomously using navigation aids but is controlled in the air via remote control. When the Naviator emerges from the water, it acquires a GPS location and can also operate autonomously, or a remote operator can resume manual control of the robot.

“This water-to-air transition is what nobody else can do,” Diez said.

Second, the robot had to be able to precisely manage propulsion speeds in both aquatic and aerial environments, a challenge he said took close to a decade to solve.

Third, he said, subsea electronics are typically placed in pressure vessels, which can drastically increase the weight of the equipment. Instead of using a pressure vessel, SubUAS is coating the Naviator’s electronics with a proprietary material that allows the unit to operate at water depths to 2,000 ft.

The technology that allows the Naviator to carry out operations underwater and in the air on the same mission opens up a host of possibilities for inspection of offshore oil and gas assets, as well as offshore wind facilities.

Offshore inspections are “a dangerous down and dirty operation,” ElSoussi said.

They also tend to require multiple assets—including vessels and subsea robots—in addition to personnel, he noted. Using a Naviator, he said, reduces both logistics and operational costs.

One reason is that a Naviator can be controlled remotely—very remotely.

An early May demonstration of the robot’s capabilities saw an operator in the United Arab Emirates (UAE) control a Naviator in New Jersey. In the demonstration, which was carried out during the AWS Energy Symposium in Houston, the unit took off from a point on land, flew to a spot over the water, slowly submerged, navigated about 30 ft underwater, slowly resurfaced, lifted into the air and flew back to shore.

While the collaboration between New Jersey-based SubUAS and UAE-based robotics company Defuzzy originated during a November 2021 meeting in Dubai, a “desert and ocean” separated the two companies for much of their collaboration, said Fuad B. Mekhti, managing partner at Quantum International and advisory board member at Defuzzy.

With few exceptions, Mekhti said, “nobody has seen each other physically,” just through digital platforms like Zoom, Teams and others.

But remote operation of the Naviator by the Defuzzy-developed robotic fleet control system specialist, sitting 7,000 miles away, was a major piece of the puzzle, and the distance separating the teams was less important than the common goal, he said.

SubUAS offers Naviators in three payload sizes: the 8-pound workhorse, 30 pounds and 100 pounds. While mission times depend on vehicle size, Diez said, the units can handle about an hour of flight and about two hours of underwater operations. He said the company is exploring technologies like fuel cells to extend the flight time.

The Naviator is controlled by a combination of software and cloud directives. Inspection objectives are issued from a Defuzzy-developed robotic fleet control system.

ElSoussi said he sees a future where there’s not just one drone but a swarm of them. The Defuzzy-developed platform is a robotic fleet control system that uses AWS’s IoT RoboRunner service, he said.

The partnerships answer the “problem of scalability” that is necessary to “turn a fleet of drones into a force multiplier when it comes to inspection,” ElSoussi said.

And the cloud makes it possible to send incoming inspection data into a single model or digital twin of the facility, ElSoussi said.

With the Defuzzy-developed platform, the platform operator is “not a micromanager” giving individual drones commands, he said. Instead, the remote operator logs an objective in the system, such as inspecting a pylon, he said. At that point, AWS’s IoT RoboRunner service will break the objective down into specific missions and tell the various robots what to do.

“They take care of the objective without you having to give a specific command,” ElSoussi said.