In the week since our last edition of What’s Affecting Oil Prices, Brent continued its meteoric rise, increasing $3.19/bbl last week to average $84.96/bbl. WTI increased $2.86/bbl to average $75.12/bbl. Both crudes continue to be supported by concerns around supply tightness. Barring sudden fundamental support technical indicators indicate that a correction is coming. However, an emotionally driven rally can be difficult to time, and prices will likely remain supported through the week, but with a ceiling of $85/bbl. 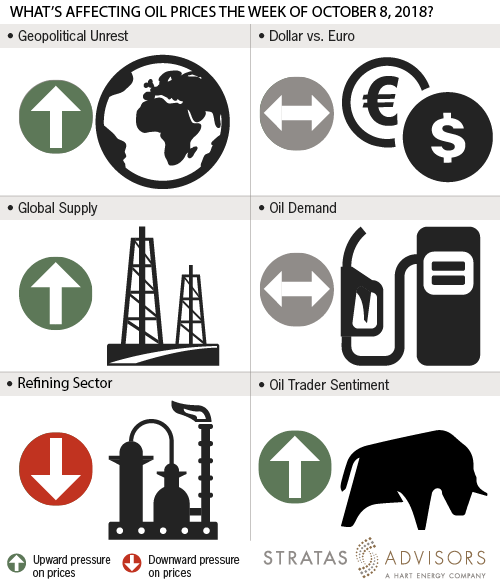 Geopolitics will be a positive factor in the week ahead. Concerns around supply tightness due to U.S. sanctions against Iran are a major factor behind current high prices. Reports that the White House is considering granting waivers could remove some price support but the effect is likely to be larger once waivers are actually granted.

The dollar will be a neutral factor in the week ahead. Fears that a strong dollar will impact emerging markets remain, especially after the Federal Reserve’s latest rate hike.

Trader sentiment will be a positive factor in the week ahead as markets are concerned about a supply shortfall. WTI net longs have been falling as Brent net longs have risen, indicating that midstream constraints remain a concern in the U.S. market.

Supply will be a positive factor in the week ahead, as market sentiment is increasingly concerned about future supply.

Demand will be a neutral factor in the week ahead.

Refining will be a negative factor in the week ahead. Margins have weakened significantly in recent weeks on higher crude prices and refiners will likely begin to reduce runs in advance of the seasonally slower winter season.