Mentors: Sridharan said he is inspired by Pioneer’s leadership team. “They have built a company with great culture and values,” he said, adding that “the most valuable advice I get from them is to stay entrepreneurial and innovative.” With this mindset, Sridharan has displayed leadership initiative several times throughout his career, including when he was barely three years into it.

Repair job: Being a leader means sometimes tackling situations that need immediate damage control. At one company during his early career, Sridharan worked hard to get the company back into compliance with regulators. Because it had “lost the trust of regulators,” the company was “under microscopic scrutiny and zero flexibility to operate.” His job was to “earn back the trust and get out of the additional scrutiny.” While he was consulting with experts and keeping them apprised of schedules and commitments, he said they warmed up to him slowly and were eventually having “open discussions on issues that needed to be addressed.” 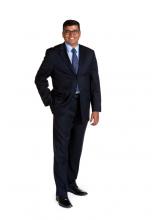