Career path: He began his oil and gas career in 2006 as an upstream asset and development engineer at Occidental Petroleum Corp. He served as a summer associate at Dallas private-equity firm Satori Capital and completed a venture capital internship with Terawatt Ventures in Boston, where he led the oil/gas sourcing effort for the $50-million energy tech-focused firm. He also worked in alternative investments from 2011-2012 at Highland Capital Management LP and then Congruent Investment Partners LLC from 2012 -2014. From 2014-2016, he was CFO of Titanium Exploration Partners.

Mentor: “Early in my career, Peter Mercure, my boss at Occidental Petroleum, encouraged me to remain creative and innovative. This mindset allowed me to grow and challenge myself as a young engineer and as a company leader today.”

The climb: “In 2006, my father and I participated in the Best Buddies Challenge in California. It is a 100- mile bike ride along the beautiful coastline on Highway 1, which raised close to $2.5 million for Best Buddies International, a nonprofit organization dedicated to the betterment of people with intellectual disabilities.

“As a novice cycler, 45 miles in a single day was the most strenuous ride I had completed prior to the 100-mile hilly challenge in a single day. My father, on the other hand, was an avid cycler, having participated in multiple MS-150 Texas rides.

“We rode together for the first -15 miles, at which time I cranked up the speed and went on ahead of my father. This excitement and energy was not to last, and by mile marker 65, I was exhausted and my pace had slowed considerably.

“It was not long thereafter that my father pulled up next to me at the same pace he started the ride. We rode the last 35 miles together. From this experience, I learned a valuable lesson. The right training or preparation is essential for each task.” 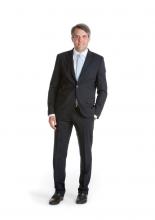