Triple Crown Energy LLC began with a focus on conventional leasehold in Kansas. “A few bad horizontal wells from nearby operators gutted the value of the project,” Williams said, but noted that today, some of this area has become a now-10,000- acre “vertical safety net” in the Kansas Mississippi Lime. It has one rig running and is divided 80% on the minerals side and 20% on the drilling side.

The company splits its focus into conventional drilling and unconventional minerals, the latter in the Scoop, Stack and Merge areas in the Midcontinent, handling mineral rights and royalties with joint venture partners. “We’re in the top three buyers that acquire minerals in Oklahoma.”

Advice for young professionals: “No matter who—or what company—you work for, or what your role is, the trick is to work at least 10% harder and smarter than the next guy. And never turn down a project or assignment, because each project is an opportunity to learn something new—an opportunity to grow.”

Mentor: His father, who roughnecked offshore Louisiana and then started an oil mud business after growing up “more or less the son of a sharecropper” in Oklahoma, is his greatest role model. 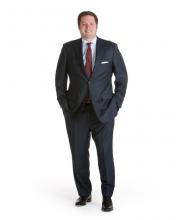