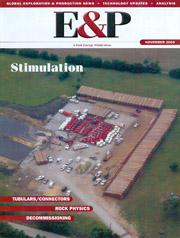 As I See It

What makes a company with a solid reputation in the drilling and production sectors of the oil and gas industry decide to break into new territory? In a word: opportunity.

Liquefied natural gas (LNG) may be new to most of the United States, but it is not for the rest of the world, where LNG has been marching forward steadily over the last few decades. In the United States, where the only thing that has been steady is the rise of energy prices, LNG has come back into vogue and created a horserace with dozens of contestants. With an integrated LNG project running anywhere from US $3 billion to $10 billion, it is a big boy's contest. The race has been created by a combination of high commodity prices, declining indigenous gas supply in the United States and the need for producers, especially the large producers, to monetize geographically remote gas reserves that had been stranded, sometimes for several decades.

A growing gas shortage and an aging jackup fleet may leave the Gulf of Mexico deep shelf developers in a bind.

You should be hearing thunder PDQ

The sound you may hear in the distance comes from the world's largest production-drilling-quarters (PDQ) platform, BP's long awaited Thunder Horse.

When it comes to oil and gas projects and the environmental crowd, we are being bombarded with a number of new acronyms.

Inhibited calcium bromide brines can cause severe localized corrosion of steels as a result of CO2 acidification.

Decommissioning of South Pass 78A

Specialized procedures were needed when it came to decommissioning a steel structure built for a mudslide area of the Gulf of Mexico.

There are a host of offshore technologies competing for the prize of decommissioning some of the biggest offshore facilities.

The value of integrated geomechanics in optimizing well construction has gained increased recognition as an effective modeling tool for the prediction and real-time management of pore pressure and wellbore stability.

The North Sea decommissioning market is significant, with the UK sector alone estimated at between US $14.29 billion to $26.8 billion, and the prize for innovation is substantial.

With tight margins driving every decision, coalbed methane (CBM) production enhancement has to be efficient and cost-effective.