Ultra Petroleum Inc. (NASDAQ: UPL) said Nov. 8 that David Honeyfield has been appointed to serve as CFO of the gas producer with assets in Wyoming’s Green River Basin.

Honeyfield has over 25 years of experience in the energy and natural resources fields with a strong background in accounting and the corporate management of public oil and gas companies, according to the Ultra press release.

Additionally, Ultra announced on Nov. 8 the appointment of Andrew Kidd, who serves on the board of directors at Highpoint Resources Corp. (NYSE: HPR) and Genon Americas Generation Inc. as the company’s general counsel. Kidd has more than 29 years of experience advising clients in the energy industry with a strong background in managing legal risk related to oil and gas operations, drilling and development, as well as experience in corporate and project finance, and mergers and acquisitions.

In their appointments, Honeyfield and Kidd succeed Garland Shaw and Garrett Smith, respectively, who both did not relocate from Houston following the recent move of Ultra’s headquarters to Englewood, Colo.

“We are excited to have David and Andrew join the Ultra Petroleum executive team,” Interim CEO Brad Johnson said in a statement. “Both have extensive backgrounds in the oil and gas industry and I am confident that their expertise and leadership will immediately contribute to the future growth and success of Ultra.”

Most recently, Honeyfield was with PDC Energy Inc. (NASDAQ: PDCE), where he served as the company’s senior vice president and CFO for roughly a year before resigning in January 2018. PDC said Honeyfield’s resignation did not result from a disagreement with the company relating to its operations, policies or practices, including its accounting policies and procedures.

Prior to PDC, Honeyfield was vice president and CFO of Jonah Energy LLC. He has also held the CFO position at Intrepid Potash Inc. and SM Energy Co. (NYSE: SM). Prior to that, he was with Cimarex Energy Co. (NYSE: XEC) as the company’s controller and chief accounting officer and also was a senior audit manager at Arthur Anderson LLP in Denver.

Total revenues during the third quarter were $203.8 million compared to $217.6 million a year ago. The company also said it has refined its 2018 capex to range between $400 million and $415 million, up from the previous $400 million target.

Ultra plans to maintain its three-rig program for the remainder of the year with all three rigs dedicated to the vertical drilling program while the company re-assesses its horizontal development plans.

“We read the third-quarter print as negative but market might reflect some relief about Ultra’s decision to completely suspend any horizontal drilling activity for the time being and to shift its operational focus back to its vertical program, which at this point is a more steady and reliable source of income,” analysts with Capital One Securities Inc. said in a research note on Nov. 8.

Ultra said operated vertical well costs for the quarter was $3.3 million, a 10% reduction compared to the previous quarter.

“Our vertical well costs are trending down toward historical averages as we have returned to pad drilling and simultaneous operations on pads dedicated to vertical development,” Johnson said. “We are very focused on bringing down well costs and expect significant further improvement in the fourth quarter and into 2019.” 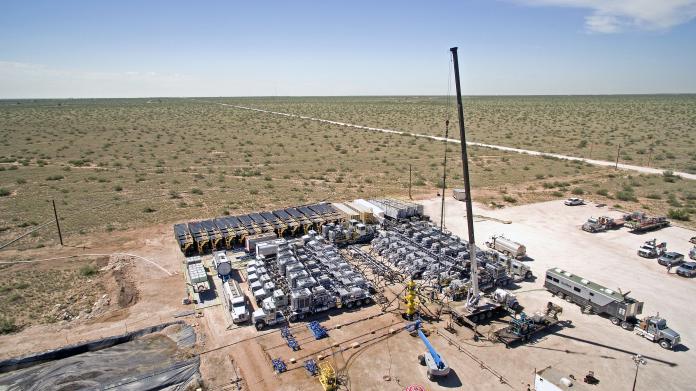 NexTier Oilfield Solutions CEO Robert Drummond shares his outlook for the oilfield services sector’s recovery on the other side of this downturn.