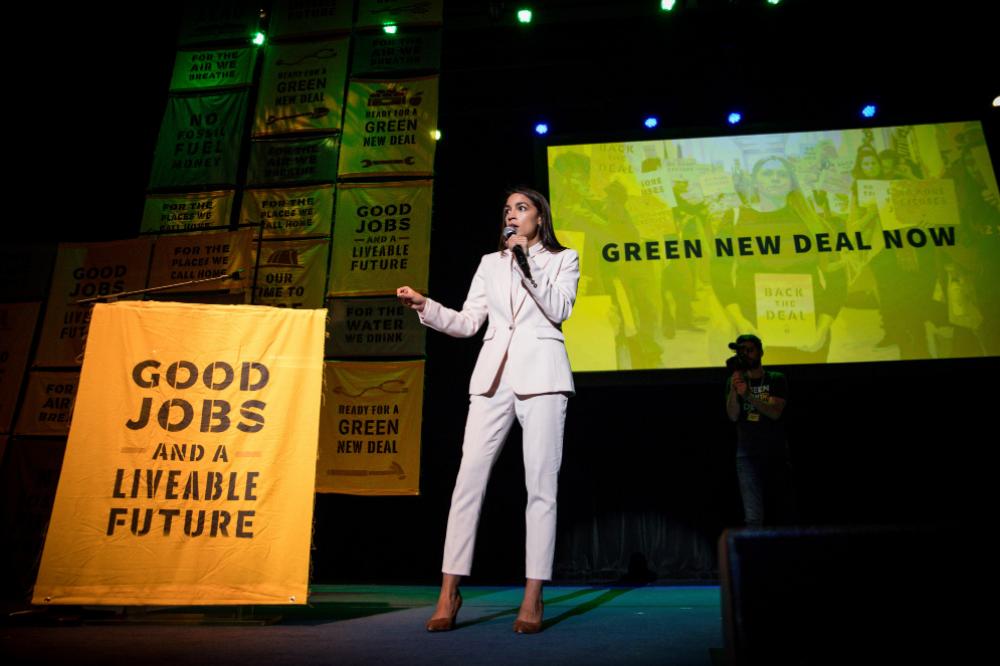 Rep. Alexandria Ocasio-Cortez, one of the authors of the "Green New Deal," put the cost of a comprehensive climate solution at around $10 trillion. Pictured Ocasio-Cortez speaking at a Washington town hall in May. (Source: Rachael Warriner/Shutterstock.com)

Eliminating fossil fuels from the U.S. power sector, a key goal of the "Green New Deal" backed by many Democratic presidential candidates, would cost $4.7 trillion and pose massive economic and social challenges, according to a report released on June 27 by energy research firm Wood Mackenzie.

That would amount to $35,000 per household, or nearly $2,000 a year for a 20-year plan, according to the study, which called the price tag for such a project "staggering."

The report is one of the first independent cost estimates for what has become a key issue in the 2020 presidential election, with most Democrats proposing multitrillion-dollar plans to eliminate U.S. carbon emissions economy-wide.

Front-runner Joe Biden's plan to get to zero emissions, for example, carries a $1.7 trillion price tag, while Beto O'Rourke's proposal comes in at $5 trillion. Rep. Alexandria Ocasio-Cortez, one of the authors of the "Green New Deal," a non-binding Congressional resolution, put the cost of a comprehensive climate solution at around $10 trillion.

Green New Deal: How Gas Gets Its Groove Back

Such ideas aim to tap into a growing sense of urgency about global warming on both sides of the political divide, but have been panned by President Donald Trump and many Republicans as being unfeasible, costly, and a threat to the economy.

A Reuters/Ipsos poll on June 26 showed most Americans back "aggressive" climate change action like that proposed by Democrats, but that support falls off dramatically if they sense the initiatives would cost them.

Wood Mackenzie's report focuses solely on what it would cost to green the U.S. power sector, a top contributor to greenhouse gas emissions—but does not include costs for other sectors like transport, agriculture or manufacturing.

The report said the transition would require "a complete redesign of the power sector" to adapt to a system of mostly intermittent resources like wind and solar energy that rely on the wind blowing and sun shining to generate electricity.

"If you move too fast you run the risk of upending the entire initiative."
—Dan Shreve, head of global wind research at Wood Mackenzie

The study also said 900 GW of energy storage would be required to make sure wind and solar assets can work reliably even when the weather isn’t cooperating, 900 times more than is currently installed. That sharp increase in investment in still-nascent energy storage technology would raise the cost of all-renewable generation to $4 trillion, the report said.

Finally, adding 200,000 miles of high voltage transmission to get wind and solar energy from the plains or deserts to major metropolitan areas would add another $700 billion.

The report warned that sharp increases in customer electricity rates to pay for such a transition could also result in a public backlash against aggressive climate policies and ultimately slow progress.

"If you move too fast you run the risk of upending the entire initiative," Dan Shreve, one of the report's authors, said in an interview.

The report said extending the timeframe for such a transition to allow for newer technologies to be developed and including nuclear power plants and some portion of natural gas generation could reduce the costs significantly.

Allowing gas to supply 20% of the nation's power needs, for example, would reduce renewable energy costs by 20% and energy storage investment by 60%, Wood Mackenzie said.