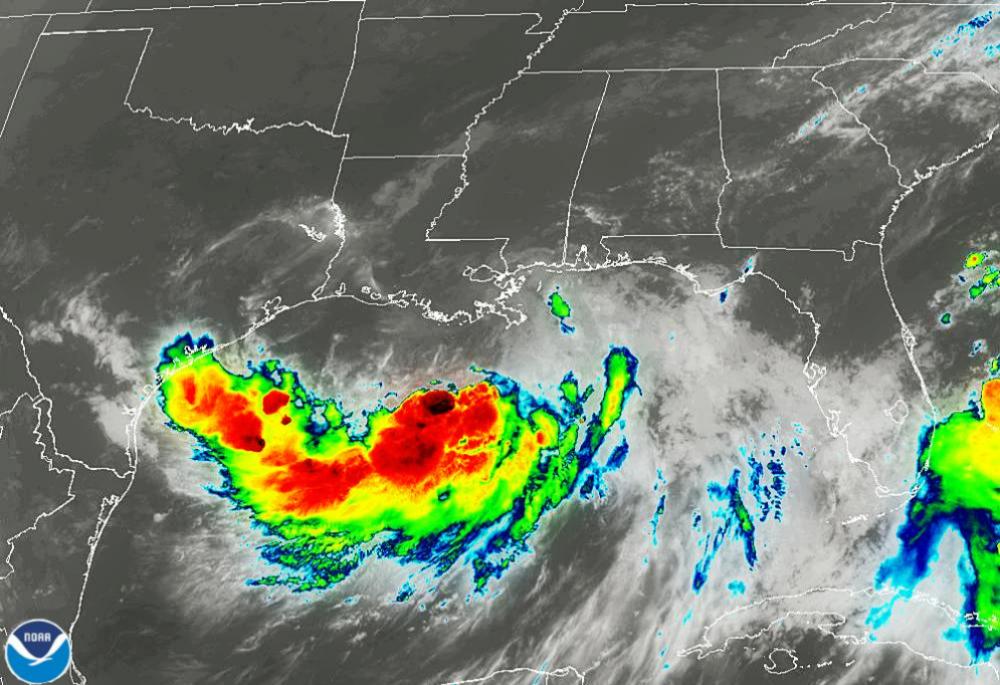 Radar image from NOAA’s GOES-East of Tropical Storm Barry over the U.S. Gulf of Mexico the morning of July 12. (Source: NOAA.gov)

An intensifying tropical storm in the U.S. Gulf of Mexico (GoM) on July 11 cut more than half the region's oil output, with energy companies evacuating staff from nearly 200 offshore facilities and a coastal refinery.

Oil firms shut more than 1 million barrels per day (bbl/d) of oil production, 53% of GoM's output, and 1.2 billion cubic feet per day (Bcf/d) of natural gas production, according to a U.S. regulator.

Tropical Storm Barry's winds reached 50 miles per hour (85 km/h) late July 11 and are expected to intensify, possibly reaching at least 74 mph, a category one hurricane, as it nears the coast, the U.S. National Weather Service said.

It expects as much as 25 inches (64 cm) of rain to fall, with flooding due to the rains and a storm surge.

Despite the production cuts, U.S. crude, natural gas and gasoline futures slipped on July 11 after OPEC forecast weaker demand for its output next year.

Dozens of oil and gas producers have removed staff from 191 production platforms, according to offshore drilling regulator U.S. Bureau of Safety and Environmental Enforcement. It said seven rigs and 11 drillships were evacuated or moved out of Barry's path.

The storm prompted Anadarko Petroleum Corp., Chevron Corp., Royal Dutch Shell Plc and others to move staff out of the path of the storm and many halted production, according to company reports.

The National Weather Service issued a hurricane warning for part of the Louisiana coast by July 12 night and projected landfall over the state's central or southeastern coast.

Data provider Refinitiv said natural gas production in the Lower 48 states could drop to a seven-week low of 87.2 Bcf/d on July 12 due to the closings, from a record high of 91.1 Bcf/d on July 5.

Packing winds of 50 mph, the storm late July 11 was about 85 miles (135 km) southwest of the mouth of the Mississippi River, moving west at about 3 miles per hour (6 km per hour). It could make landfall late July 12 or July 13 along the Louisiana coast and bring 10 inches to 20 inches (38 cm) of rain to the central Gulf Coast, forecasters said.

A 3-ft to 6-ft (0.9-m to 1.8-m) storm surge was expected at the mouth of the Atchafalaya River, according to the National Weather Service.

Phillips 66's Alliance refinery sits next to the river 39 miles (63 km) south of New Orleans. The last hurricane to flood the refinery was 2012's Hurricane Isaac. The refinery was also shut by Hurricane Gustav in 2008 and Hurricane Katrina in 2005.

In 2017, Hurricane Nate led Phillips 66 to shut the refinery, which was restarted within days as the storm turned away from the area.