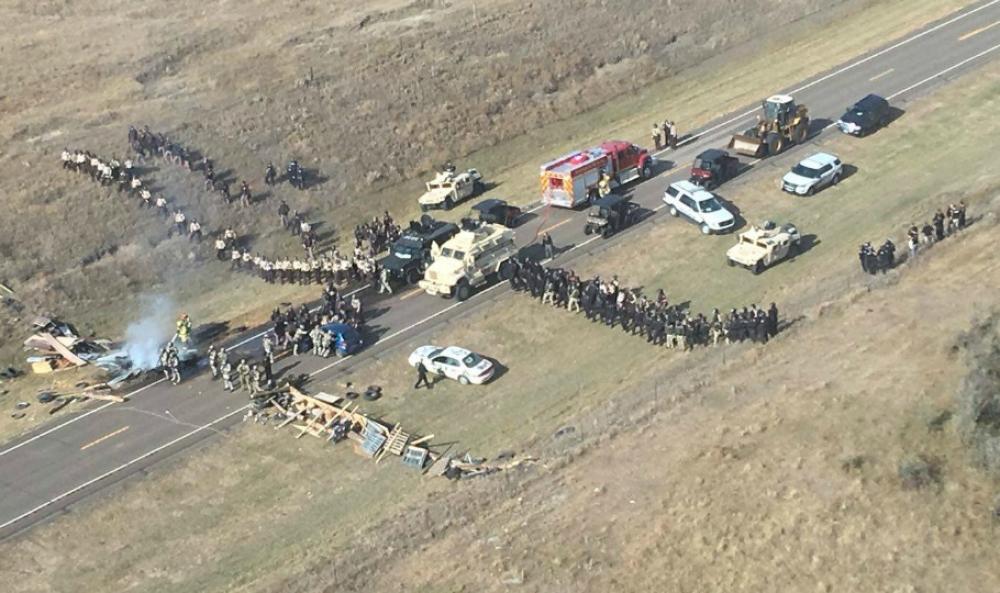 Police in North Dakota began clearing a group of Native American and environmental protesters from an encampment near an oil pipeline construction site on Oct. 27 in a move that could escalate tensions in a standoff that has lasted several months.

The police moved in on the protesters camped on private property near the $3.8 billion Dakota Access Pipeline, near the town of Cannon Ball, at around 11:15 a.m., according to a statement from the Morton County Sheriff Department.

Police also were removing roadblocks set up by the demonstrators.

“Protesters’ escalated unlawful behavior this weekend by setting up illegal roadblocks, trespassing onto private property and establishing an encampment has forced law enforcement to respond at this time,” Morton County Sheriff Kyle Kirchmeier said in the statement.

The 1,172-mile pipeline, which is being built by a group of companies led by Energy Transfer Partners LP, would offer the fastest and most direct route to bring Bakken shale oil from North Dakota to U.S. Gulf Coast refineries.

Supporters say it would also be safer and more cost-effective than transporting the oil by road or rail.

But the pipeline has drawn the ire of the Standing Rock Sioux tribe and environmental activists who say it threatens the water supply and historical tribal sacred sites. They have been protesting for several months and dozens have been arrested.

On Oct. 24, Native American protesters occupied privately owned land in the path of the proposed pipeline, claiming they were the land’s rightful owners under an 1851 treaty with the U.S. government.

The Federal Aviation Administration (FAA) has also temporarily banned aircraft from flying over the area affected by the protests. The restriction, issued on Oct. 26, bars any aircraft other than those belonging to law enforcement from flying within a radius of 4 nautical miles of Cannon Ball.

The town, located about 50 miles south of the state capital Bismarck, is near a site where a section of the Dakota Access pipeline would be buried underneath the Missouri River.

The FAA restriction is effective until Nov. 5 because of unspecified “hazards.”

A spokesman for the FAA did not immediately respond to a request for comment.