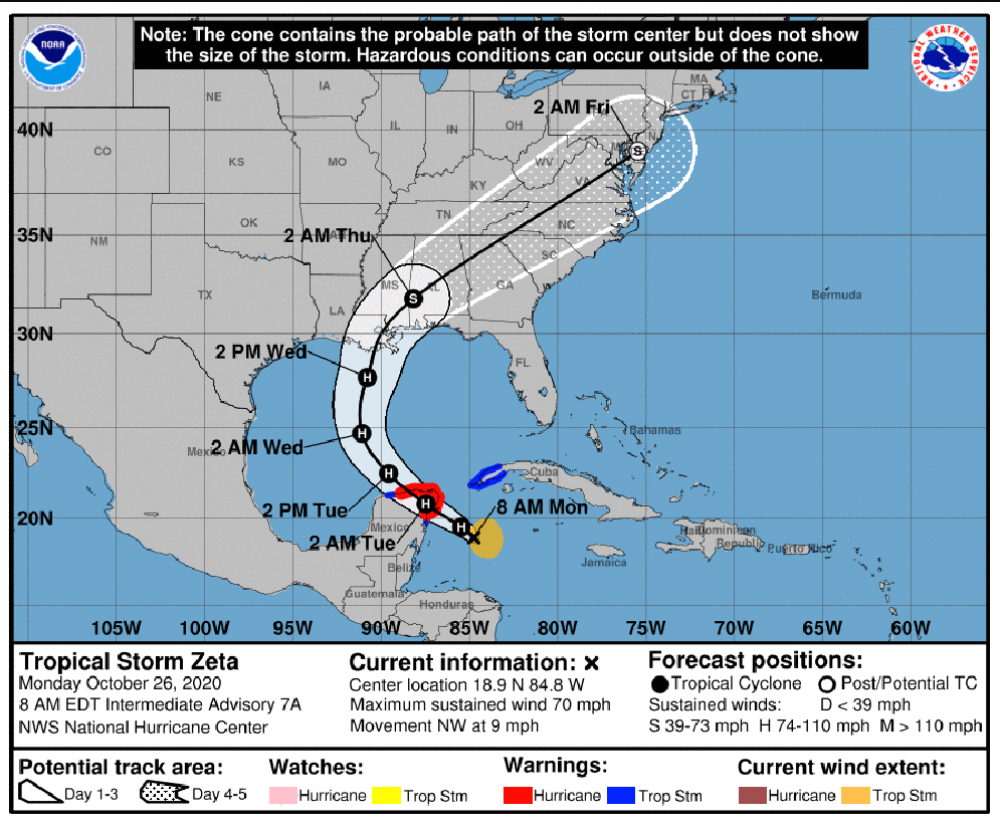 Projected track of Tropical Storm Zeta in the U.S. Gulf of Mexico as of Oct. 26. (Source: NOAA)

Oil producers on Oct. 26 cut 16% of offshore production and pulled workers off platforms in the U.S. Gulf of Mexico (GoM) as the 27th named storm of the season strengthened into a hurricane.

The storm was 105 miles (170 km) southeast of Cozumel, Mexico, packing maximum sustained winds of 80 miles per hour (130 km per hour) shortly after 2 p.m. CDT (19 GMT). It could approach the northern Gulf Coast at or near hurricane strength on Oct. 28, the U.S. National Hurricane Center said.

BP Plc and Equinor ASA withdrew workers and shut their offshore production platforms, spokespeople said, as Zeta steamed toward Mexico's Yucatan Peninsula. The hurricane is forecast to sweep across the resort area on Oct. 26 and churn through GoM oil fields.

BHP Group Ltd. and Chevron Corp. began withdrawing staff from their U.S. GoM offshore facilities. Royal Dutch Shell Plc paused some drilling and limited non-essential staff movement to its platforms, but had not halted production, it said in a statement.

Occidental Petroleum Corp., the third-largest producer in the offshore GoM, is implementing storm preparations, according to its website.

It has been a challenging year for GoM oil and gas producers, with companies having to withdraw workers and halt output at least six times as storms churned through the Gulf's offshore production region.

If Zeta strikes the U.S. mainland, it would top the record of 10 named storms to make a U.S. landfall during the span of one hurricane season, set only weeks ago by Hurricane Delta.

Mississippi River ports from Baton Rouge to the GoM were open on Oct. 26 but placed on notice for gale force winds from a storm due within 72 hours.

323 Exploration retained EnergyNet for the sale of more than 12,000 net leasehold acres in West Texas through a sealed-bid offering.