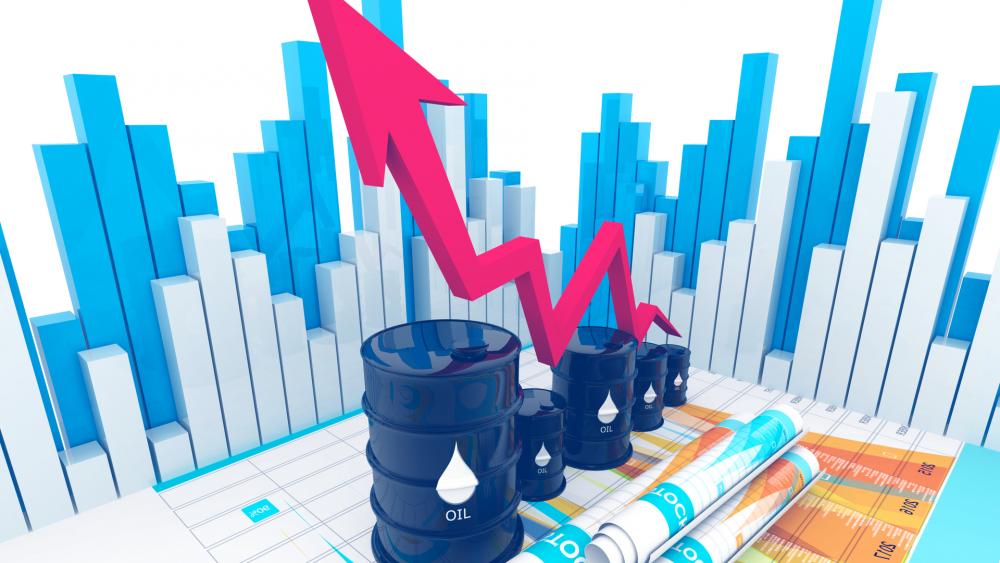 Oil prices surged on Sept 16, with Brent crude posting its biggest intra-day percentage gain since the start of the Gulf War in 1991, after an attack on Saudi Arabian oil facilities on Saturday shut in the equivalent of 5% of global supply.

Saudi Arabia is the world's biggest oil exporter and the attack on the state-owned producer Saudi Aramco's processing facilities at Abqaiq and Khurais has cut output by 5.7 million barrels per day. The company has not given a timeline for the resumption of full output.

"Abqaiq and Khurais are main processing centers for Saudi Arabia's Arab Extra Light and Arab Light crude oil,” said Wood Mackenzie research director Vima Jayabalan, in a released statement. "The impact and the next course of action will depend on the duration of the outage. Saudi Arabia has enough reserves to cover the shortfall over the next week, but if the outage extends, then filling the gap with the right type of crude quality could be a challenge. Moreover, OPEC+ output cut predominantly consists of medium and heavy sour crudes.

A source close to the matter told Reuters the return to full oil capacity could take "weeks, not days."

Saudi Arabia's oil exports will continue as normal this week as the kingdom taps into stocks from its large storage facilities, an industry source briefed on the developments told Reuters on Sunday.

"How the United States and Saudi Arabia deal with the situation will be closely watched," said Margaret Yang, market analyst at CMC Markets in Singapore.

"If higher oil prices are here to stay, Asia's oil reliant economies such as China, Japan, India, South Korea and the Philippines will start to feel the pain as higher energy and raw material prices add on the cost burden," Yang added.

President Donald Trump said he approved the release of oil from the U.S. Strategic Petroleum Reserve (SPR) if needed in a quantity to be determined due to the attack. 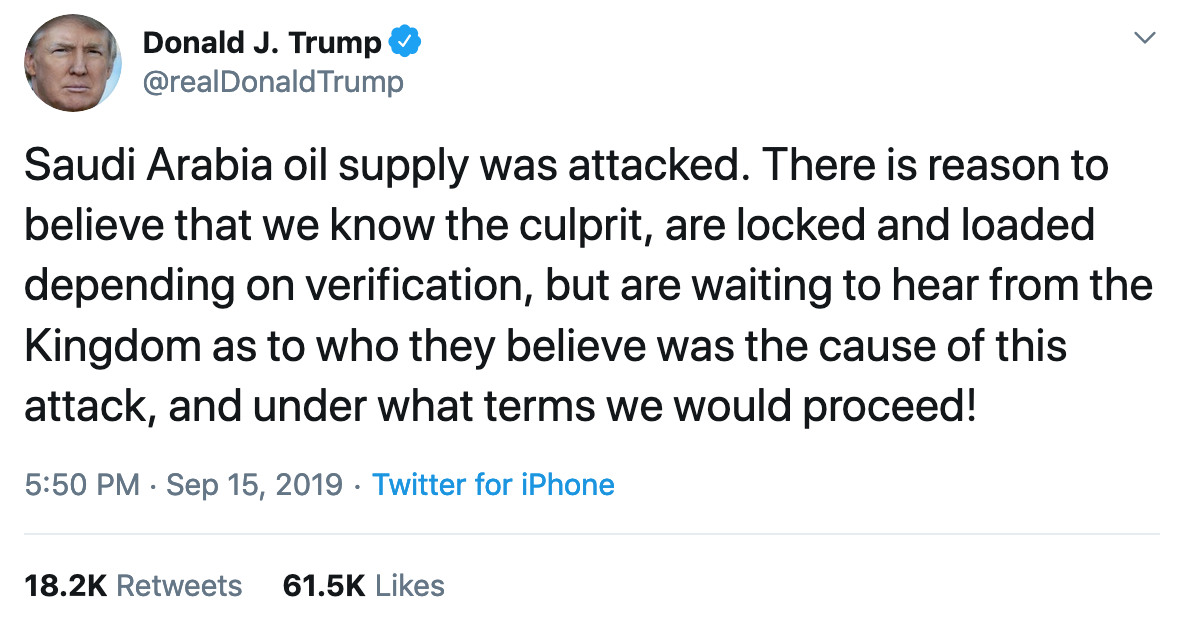 The attack on plants in the heartland of Saudi Arabia's oil industry, including the world's biggest petroleum-processing facility at Abqaiq, came from the direction of Iran, and cruise missiles may have been used, according to a senior U.S. official. Initial reports indicated the attack came from Yemen.

Trump also said the United States was "locked and loaded" for a potential response to the attack on Saudi Arabia's oil facilities.

Risk Premium
ANZ Research said in a note that the market would price in "a sizable global geopolitical risk premium.”

"Any expectation that the market had about the U.S. easing sanctions on Iran following President Trump's dismissal of John Bolton will quickly dissipate. This should see Brent crude test the $70 per barrel mark in the short term," ANZ Research said.

Saudi Arabia is set to become a significant buyer of refined products after the attacks, consultancy Energy Aspects said in a note.

Meanwhile, Saudi Aramco has told one Indian refinery there will be no immediate impact on oil supplies as it will deliver crude from other sources and has adequate inventory, a source with the refinery said.

Other Asian buyers such as Thailand have also said the attack would have no immediate impact on oil imports.

"China, South Korea, Japan and India are the biggest takers in Asia, with China and Japan leading the pack at an average of 900 – 1,100 kilo barrels per day each. India could be most exposed as its reserves are the least. China has SPR (Strategic Petroleum Reserve) and commercial crude storage, while Korea and Japan have IEA reserves to fall back on," WoodMac's Jayabalan said.

"Collectively, Asian demand for Saudi Arabian crude is around 5 million barrels per day; accounting for almost 72% of Saudi Arabia's crude exports. Asian consumption of Arab Extra Light and Arab Light grades alone from the affected facilities varies between 2.5 and 2.7 million barrels per day seasonally. The region's dependence has increased significantly over the last 1.5 years.

Saudi Aramco's longer-dated bonds bore the brunt of the falls with the 2049 issue dropping nearly 3 cents in the dollar to touch their lowest since early August, data from Tradeweb showed.

"Markets had become too sanguine over the last few months about the geopolitical risks facing countries allied with the US against Iran, with Saudi Arabia particularly vulnerable," said Patrick Wacker at UOB Asset Management.

On Monday, Saudi stocks gained 0.5%, with analysts pointing to support from state institutions as well as higher oil prices supporting firms. Yet the gains only partly mitigated a 1% drop on Sunday, with the index down 0.4% since the start of the year.

Blue chip Saudi Basic Industries Corp (SABIC) gained 0.6% after tumbling nearly 3% on Sunday when the company said it had curtailed feedback supplies by about 49% following the attacks.

"The critical issues for Saudi Arabia and the global oil market are the extent of the damage and the time required to restore Aramco's oil and gas supply," said Monica Malik, chief economist at Abu Dhabi Commercial Bank, adding the short-term impact could be partly mitigated by the kingdom drawing down strategic oil reserves.

"We estimate that Saudi Arabia's fiscal deficit could widen by some 0.9-1.0% of GDP under the scenario mentioned above, though oil revenue would see some support from the higher oil price as production and exports gradually normalize.”

European shares fell on Monday after four straight sessions of gains as attacks on crude facilities in Saudi Arabia and weak Chinese data added to worries over global growth while boosting shares in unaffected oil producers.

The drone attacks on the weekend, which cut more than 5% of the global oil supply, sent crude prices soaring as much as 19% and pushed the oil & gas index 2.4% higher, driving roughly 3% gains for majors BP and Shell.

UK and Irish-based explorer Tullow Oil jumped 7%, to the top of Europe's STOXX 600, after the firm said it plans to drill three or more exploration wells in Guyana next year following its second oil discovery in the country. 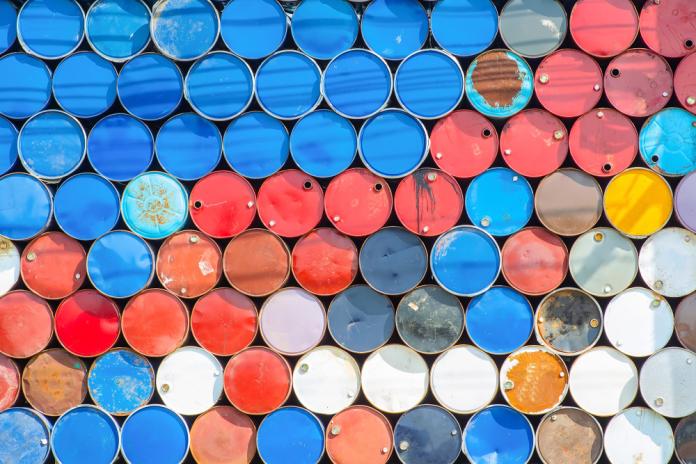 Increase in production is intended to bring Russia back to the negotiating table.