President Donald Trump on April 29 said his administration will soon release a plan to help U.S. oil companies, which Treasury Secretary Steven Mnuchin said could include adding millions of barrels of oil to already-teeming national reserves.

Mnuchin did not provide details on where the government might find the storage capacity as the coronavirus pandemic crushes demand for gas globally. The nation’s strategic reserves are already 90% full and private storage has been filling rapidly.

“We’re also exploring potentially having the ability to store another several hundred million barrels, so we’re looking at lots of different options,” Mnuchin said during a White House briefing on the pandemic’s effects on the industry.

The U.S. Strategic Petroleum Reserve (SPR) currently holds roughly 636 million barrels (MMbbl) of crude, and has the ability to hold about 714 MMbbl. Fuel demand has dropped by roughly 30% worldwide while supply has ballooned.

Outside of the nation’s strategic reserves, about 60% of U.S. storage capacity is currently full, or nearly 400,000 barrels out of a capacity for 653,000, according to U.S. Energy Department figures. At the end of March, storage was 52% full. The largest U.S. storage site, the hub at Cushing, Oklahoma, is 81% full.

A team made up of people from the Treasury and Energy Departments was working on the options, Mnuchin said.

Trump said that he sees helping the oil industry as a top priority. When asked when he would release a plan to help oil companies, Trump said, “I would say shortly.”

“It’s unbelievable. It’s prices that are so low, and in some cases, we’re storing oil and getting paid for storage because we have a tremendous capacity for it,” Trump said. “So what’s happened with these strategic reserves is incredible.”

Oil prices on April 29 surged 10% after U.S. crude stockpiles grew less than expected and fuel consumption seemed possibly poised for a uptick as some states, as well as European countries, ease coronavirus restrictions.

Country imports 80% of its energy. 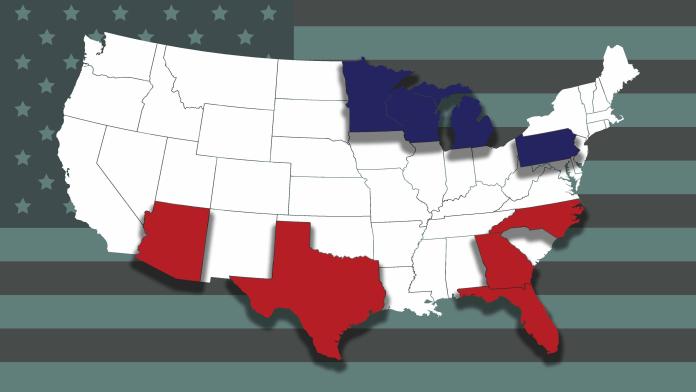 Veteran political strategist Jim Ellis stresses five southern states that Trump must win again to have a shot at an Electoral College victory; Biden needs to defend the Great Lakes.

Activist groups had raised concerns regarding Enbridge’s intentions to protect streams and wetlands.