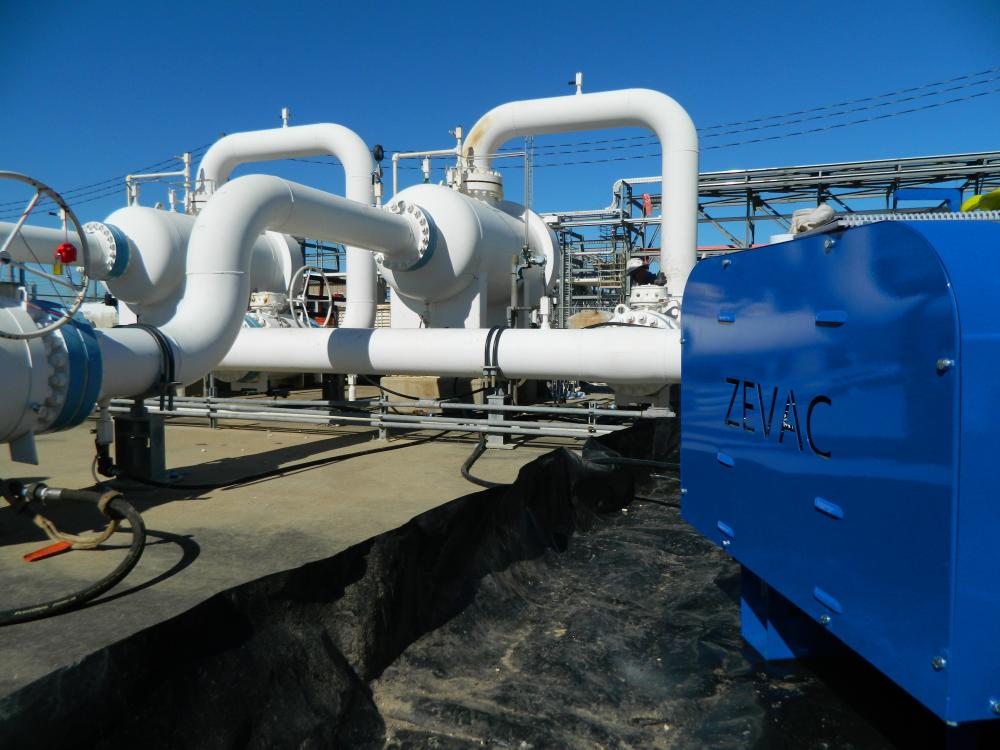 Dominion Energy is using innovative technologies like Zero Emissions Vacuum and Compression (ZEVAC) to keep more methane in the system and out of the atmosphere.

RICHMOND, Va.—Dominion Energy (NYSE: D) announced Feb. 12 an historic, industry-leading initiative to reduce methane emissions from its natural gas infrastructure by 50% over the next decade, based on 2010 levels. The initiative will prevent more than 430,000 metric tons of methane from entering the atmosphere, the equivalent of taking 2.3 million cars off the road for a year or planting nearly 180 million new trees.

This voluntary initiative builds on the significant progress Dominion Energy has made in reducing methane emissions over the last decade, which prevented more than 180,000 metric tons of methane from entering the atmosphere, equivalent to taking almost 1 million cars off the road for a year or planting 75 million new trees. The initiative also builds on the 50% reduction in carbon emissions Dominion Energy has achieved across its electric fleet since 2000, and the significant advances it is making with renewable energy.

Related: On A Mission To Mitigate: Industry Vs. Methane Leaks

“We recognize we need to do more to reduce greenhouse gas emissions to further combat climate change,” said Diane Leopold, President and CEO of Dominion Energy’s Gas Infrastructure Group. “We've made significant progress, but we're determined to go much further. With this initiative, we are transforming the way we do business to build a more sustainable future for the planet, our customers, and our industry.”

Methane is the primary component of natural gas, which is used to heat 118 million American homes, generate one-third of the nation’s electricity, and power manufacturing and other industries. Natural gas is transported to power plants, homes and businesses across the U.S. through a 2.5 million-mile national underground pipeline system.

Over the last decade, the industry has made progress in reducing methane emissions from natural gas production and distribution systems. With the new initiative, Dominion Energy is taking a leading role in the industry by reducing methane emissions across its entire system—from production and storage to transmission and distribution.

Reducing or eliminating venting during maintenance and inspection

Gas venting during planned maintenance and inspection is the largest source of methane emissions from Dominion Energy's transmission and distribution pipeline system. In order to perform maintenance or inspection on pipelines and compressor stations, natural gas sometimes has to be removed from the system, which was historically done by venting it into the atmosphere. A primary focus of the company's initiative will be dramatically reducing or even eliminating venting during maintenance activities.

One innovative example is the company’s use of Zero Emissions Vacuum and Compression (ZEVAC®) technology to capture methane before maintenance or inspection so it can be recycled for use in other parts of the system. After piloting the technology on a limited scale, Dominion Energy recently purchased 16 ZEVAC® units from TPE Midstream for widespread use across its distribution and transmission pipeline systems.

“Instead of venting methane when we do maintenance or inspection, we’re now capturing, recycling and reusing it so it stays in our system and out of the atmosphere,” said Leopold.

“Thanks to advances in technology and innovations in our operating procedures, we can capture methane on a much larger scale than we could have 10 years ago,” said Mark Webb, Dominion Energy’s chief innovation officer. “We’ve tested and proven these technologies in some parts of our infrastructure, and now we're dramatically expanding them across the entire system.”

While gas venting is the largest source of methane emissions, there are other minor sources that can add up to larger volumes. Dominion Energy is focused on reducing these sources by replacing older equipment with new low-emission equipment.

“A great example is our program to replace natural gas-powered pumps at our gas producing wells with solar-powered electric pumps, which reduces methane emissions at these facilities by more than 90%,” said Leopold.

The company is also replacing other aging equipment across its system, including bare-steel pipe, cast-iron pipe, valves, fittings, joints and seals to reduce or even eliminate these emissions sources.

Even after reducing emissions from gas venting and aging equipment, there is still more the company can do to reduce minor emissions that are often the hardest to detect because they are odorless and cannot be seen or heard.

Over the last decade, Dominion Energy has made significant progress finding even the smallest emissions using infrared cameras. This program will be dramatically expanded to detect and repair these minor emissions sources across every part of the company’s natural gas system—from production and storage to transmission and distribution.