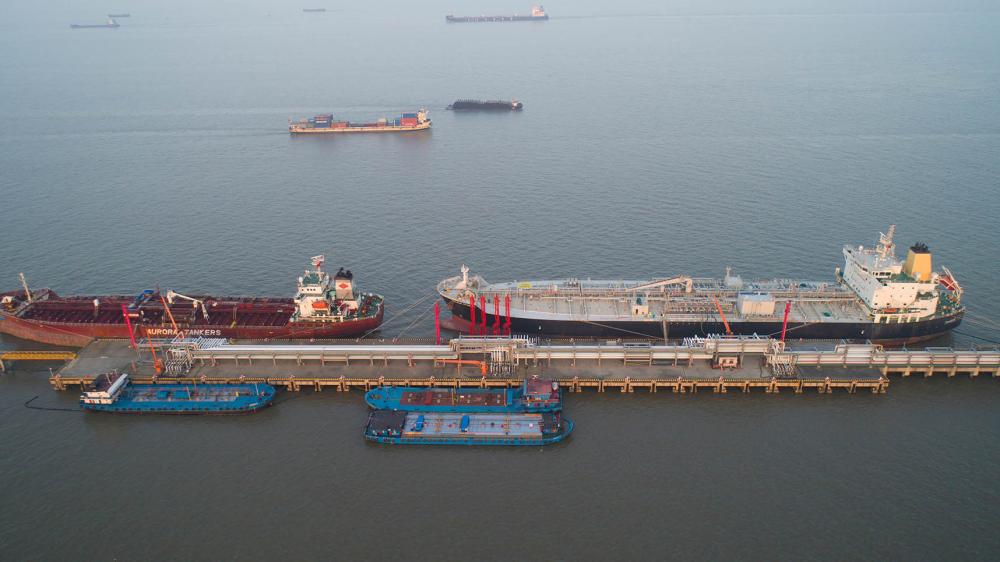 Crude tankers are moored at a storage terminal in Taixing, China. (Source: Yaorusheng/Shutterstock.com)

SINGAPORE—China has increased U.S. crude purchases with some buyers snapping up cargoes at the widest discounts ever as sellers seek to offload excess supplies in Asia, six trade sources said on April 1.

China started processing in March applications from its companies to waive import tariffs on U.S. energy goods as part of the Sino-U.S. Phase 1 trade deal and they have since bought LNG and LPG from the United States.

The world’s largest crude importer is boosting U.S. energy imports at a time when the world is swamped with excess supply after OPEC and Russia failed to extend production cuts and as measures to curb the spread of the coronavirus undermined demand.

Cheap U.S. energy supplies will help China lower its import costs, but the deep discounts will add further pressure on U.S. producers to shut in production after U.S. crude futures slumped to their lowest since 2002.

U.S. Mars Sour crude has been sold to Chinese buyers at discounts between $7 and $9 a barrel to September ICE Brent futures for July arrival while the discounts for WTI in Midland were between $6 and $7 a barrel, the sources told Reuters.

BP and Equinor may have sold some of these cargoes, they said, while the buyers were not immediately known. BP declined to comment while Equinor could not be immediately reached for comment outside office hours.

“Only the Chinese are buying and the rest of the world are selling,” a Singapore-based trader said, leading to some “very aggressive offers” for U.S. crude into that market even though the oil’s benchmark is already at the lowest in 18 years.

In early March, independent refinery Panjin Haoye Chemical Co bought Mars crude from PetroChina in one of the first signs of Chinese refiners resuming U.S. crude purchases. Mars and WTI were then offered at spot premiums to benchmarks.

Strong demand to ship out excess U.S. crude to China has also caused freight rates to surge, with costs jumping to $8-$10 per barrel, two of the sources said.

At least nine Very Large Crude Carriers (VLCCs) have been booked by traders and refiners to load crude from the U.S. over the next two months for Asia, four of which could be bound for China, according to a shipbroker's reports.

Other Asian importers of U.S. crude such as India and Thailand are reducing refinery utilization rates to cope with a sudden plunge in domestic demand as their governments impose more stringent coronavirus lockdown measures.

Chinese refiners are gradually ramping up output after sharp cuts in February although they have yet to return to levels before the outbreak as demand recovery is still slow, the sources said.

“Demand is bad globally. Only China seems relatively OK,” said a source at a Shandong-based refinery.

“We are steadily increasing operation rates.”