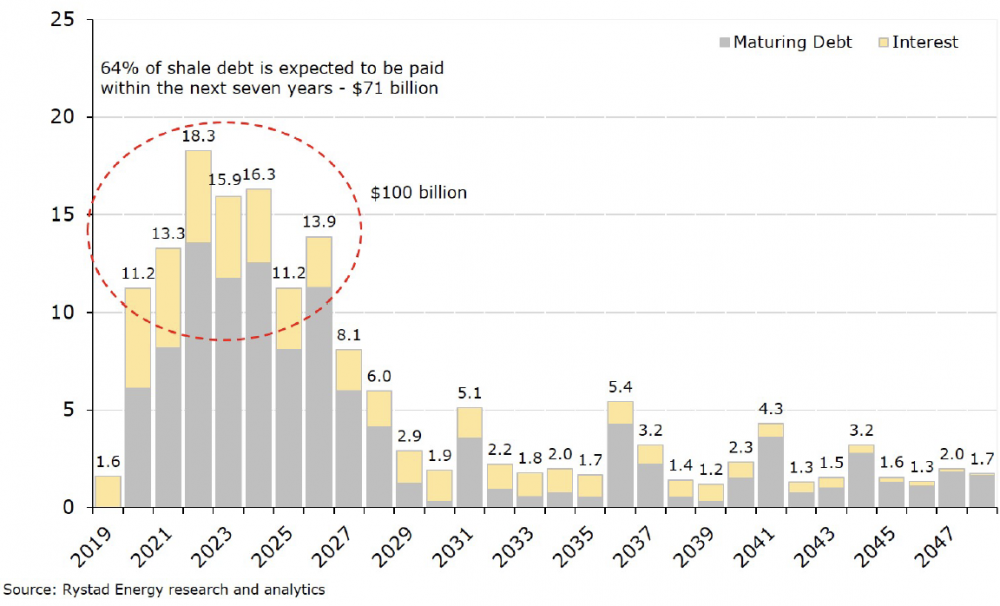 The U.S. shale industry has undergone a tortuous time of restructuring since the commodity price downturn that began in late 2014. A number of players have gone under, while the sector as a whole has had to severely alter the financial strategies that have long characterized the business, particularly the tendency to outspend cash flow.

Still, the U.S. shale industry is not going bankrupt by any means, according to a recent note from independent energy research and business intelligence firm Rystad Energy.

“In a nutshell, we do not believe the recent bankruptcies that have beset a number of shale players are indicative of an industrywide epidemic,” said Alisa Lukash, a senior analyst on the company’s North American Shale team.

In many cases, bankruptcy is simply a way to reorganize debt and assets, the report said.

For example, Sanchez Energy Corp. filed Chapter 11 in August “in a bid to reduce its debt burden and improve its financial flexibility, “according to Rystad. “Similarly, Halcon Resources Corp., which was delisted from the NYSE in August, has expressed uncertainty about its ability to remain in compliance with all the current covenants in its senior credit agreement.”

While crude prices have risen recently, natural gas players haven’t had any relief from low prices.

Not that the pressures of staying in business as commodity prices remain stifled hasn’t created significant challenges for U.S. E&Ps. “During the next seven years, the top 40 U.S. shale oil producers are expected to spend about $100 billion on debt installments and interest unless further debt refinancing is applied,” the report said.  These 40, which represent about half of U.S. shale crude production overall in 2018, face interest payments of between $2.6 billion and $5.1 billion annually, “while the maturities schedule totals roughly $71 billion between 2020 and 2026.”

Financial pressures remain. “Overall we see more than $112 billion in outstanding debt for the considered peer group, with a combined enterprise value of $355.5 billion as of September 2019,” according to the report.

“These numbers indicate a lack of financing to deal with the burden of the obligations. Given t he low levels of external capital additions during the past 10 months, the probability of debt refinancing in the coming quarters seems relatively slim.”

The shale group’s diversity in terms of acreage quality and capital efficiency are two of the reasons the Rystad analysts expect the group to sidestep some of the stress that a few companies have fallen into. EOG Resources is an example of how some companies have successfully negotiated the current challenging commodity price environment, they said.  The company “has increased production by 5% quarter-on-quarter, realized close to $1.1 billion in free cash flow in second-quarter 2019 and used the cash to pay down $1 billion in debt.”