Abrado Wellbore Services has secured a multimillion dollar contract from Chevron’s Environmental Management Co. to support the plug and abandonment (P&A) of more than 30 wells offshore California, the company said on Aug. 5.

The mature wells, which lie in Federal waters approximately 12 miles off the Californian coast, are exhibiting sustained casing pressure to varying degrees. Some of the wells require dual string remediation for permanent P&A.

“The California campaign is the latest step in our development and, along with other recent successful projects in the Gulf of Mexico, enhances our ambition to become a pre-eminent supplier to the global oil and gas community,” Sandy Esslemont, Abrado CEO, said.

Abrado has supported Chevron and other super major operators in the Gulf of Mexico on numerous P&A projects since 2016 and the company will transfer its knowledge and proven expertise from the Gulf to California for this latest campaign.

Plugging and abandoning the Californian wells will present several challenges in dealing with any sustained casing pressure. Some of the dual section milled windows will be greater than 100 ft (30 meters) long to provide increased rock to rock sealing and cement plug assurance.

Esslemont said advances in section milling technology had sparked somewhat of a renaissance in the process for surgically removing multiple casing strings at critical depths in the well—where operators now have confidence in a viable solution for permanent, verifiable and environmentally responsible P&A. 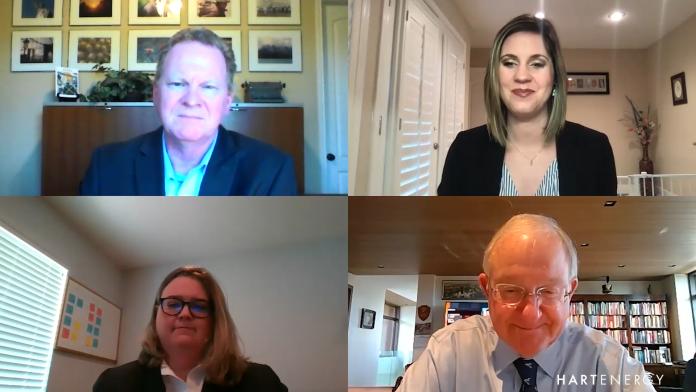 The discussion with Tom Petrie, chairman of Petrie Partners, continues as he looks at U.S. shale going forward and the future of OPEC in a new price environment.