Zach Muroff knew early on that he wanted to be part of a startup, but he didn’t necessarily know it would be an energy startup. Although his introduction to the oil and gas sector was through consulting, he eventually made his way to Texas where he learned about the A&D side of the industry. Now, he serves as vice president of the company as he guides his team to success.

“Being a part of a startup has always been something I have been interested in,” Muroff said. “We had our share of ups and downs due to competition and market changes in the industry and ended on a high note with the sale of 1Derrick to DrillingInfo/Enverus in 2018.”

Originally from Massachusetts, Muroff now lives in Dallas, Texas, with his wife, Sara, and their two children, Harrison and Madeline. He currently runs business development for the Dallas/Fort Worth office as vice president of EnergyNet.

“I had a roundabout way of finding my way to Texas and the oil and gas industry starting my career in the power and downstream industries in research and consulting in Cambridge, Massachusetts. When I joined Deloitte’s consulting and M&A strategy groups, I pivoted to the upstream industry just in time for the shale boom.

It wasn’t until I joined 1Derrick that I got a taste of the A&D world, and I knew this is where I wanted to be and found my passion in the deal-making side of the industry. I have always had an interest in A&D and deal-making, hence my joining EnergyNet in 2020.”

“I was employee No. 1 at 1Derrick in the U.S., leaving behind a steady job at Deloitte to join a startup with no revenue. I ended up leading business development and growth for the company until its sale to DrillingInfo/Enverus in 2018.”

“A good leader possesses accountability, empathy, humility, resilience and integrity. I have always believed that if you work like you have something to prove you will find a way to get it done. There is nothing that can replace hard work, a solid attitude and the right amount of grit. I have learned so much over my career simply from asking questions and putting in the extra work and prep to be the first call for our clients.

I have been fortunate to have a strong family and close-knit group of friends. During a challenging part of my career, my wife would always remind me ‘to live in the past is to die in the future.’”

“This industry has its ups and downs, as we’ve all witnessed. The fascinating thing about it is how we constantly bounce back and find new and creative ways to be more economical and lower costs.

Young industry members bring a fresh perspective and hunger to defy the status quo. We have seen this firsthand at EnergyNet as the A&D markets further shift toward an online marketplace, especially in the higher value deals.” 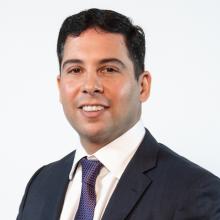