After hitting some roadblocks early in his career, Taylor McCay hit his stride when he was hired as a vice president of his company at just 32. Originally from North Carolina, McCay moved to Texas in search of work and was able to bring a unique perspective to EnCap Investments as the only geologist on the team.

“Becoming a vice president with EnCap Investments LP at age 32 was a major milestone for me professionally,” McCay said. “Making the switch from a senior geologist who was operating wells for an E&P company to working for a private equity provider was a major shift in my career. The sheer volume of deals and pace at which my team evaluates opportunities is impressive by even our standards.”

Currently based in Houston, McCay continues to serve as vice president of EnCap Investments.

“When I graduated from college at UNC-Chapel Hill, there wasn’t a very robust job market for geologists in North Carolina other than many small private environmental companies and the EPA. I discovered an opportunity to move to Houston and work for an Anchorage, AK-based energy company evaluating the Alaska North Slope and Prudhoe Bay.

Five months after moving to Houston, I was laid off as a geologist from my first job out of college when my Houston energy group was dissolved by our Anchorage, AK-based headquarters. I never considered moving back to North Carolina and instead took the first energy position I could find as an associate geologist. From there I went to work at Drillinginfo, Inc., worked my way up to a regional director and then returned to E&P by taking a position as a senior geologist. I’m extremely proud that I endured and stayed in a city where I didn’t know a single person to get to where I am today. Getting hired to work at EnCap Investments LP to head up their subsurface analysis was my proudest moment as a working professional."

“When I was working at Gastar Exploration LLC, I was working in a horizontal operated and non-operated program drilling the Hunton Limestone in Kingfisher, Oklahoma. Seemingly overnight, the ‘STACK’ play took off and everyone was drilling different parts of the Miss Lime south of our position. We already possessed a deep technical understanding of the Miss Lime given its prolific history of vertical production, but had not evaluated it specifically for horizontal exploration. After a lot of quick work, we chose what we believed to be our most favorable location, the Deep River 30-1H, which was a very successful well. Through that great result, we pushed the northeastern extension of the play much further."

“Being the only geologist at EnCap, I am solely responsible to identifying subsurface risks based on my geologic analysis. I lead in that capacity by doing the work necessary to solidly defend the positions that I take and the cases that I must make for the benefit of my company.

Benevolence is certainly at the core of any good leader. Only by having the best interests of others in mind can you positively benefit those around you while also benefiting yourself. A benevolent leader also has the respect and admiration of those they lead.

My previous boss, Keith Blair, was an excellent leader and mentor. He had a mastery of the fundamentals of geology, which allowed him to accurately evaluate the many deals we observed in my time working with him. I developed a strong skillset and an excellent ability to evaluate open hole logs because of him. My current boss, Jerry Smith, has a robust background in A&D. His transactional and technical experience has helped me evolve in my career. On a personal level, his advice to focus equally on each pillar of life has made me keep into perspective what is really important."

“I have an incredibly unique opportunity to interact with some of the brightest minds in the industry on a daily basis. Due to that fact, I am constantly learning, and that very much keeps me interested and motivated.

My short term and long-term goals are currently the same.  I want to continue to hone my technical skills and continue to learn more of the engineering and finance side of the industry. The recent global pandemic has forced us all to challenge a lot of our business norms, namely how much time we need to physically spend in the office. I think by allowing people to be more flexible in both their work schedule and their day to day, it can achieve a better culture as well as work product." 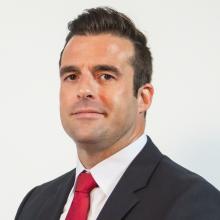