If Ryan Fitzpatrick was asked when he finished high school what kind of career he wanted, he would have said a career in architecture, his passion. However, a year and a half into college, he changed his mind and shifted his focus to the commercial side of the oil and gas industry. Now he is one of the handful of people who helped build Pursuit Oil & Gas to focus on the Eagle Ford Shale.

“After finishing three semesters studying architecture at Texas Tech University, I realized that—even though architecture was a passion of mine and the only real career path I had ever seriously considered—it was not what I wanted to do as a career for the next 30-plus years,” Fitzpatrick said. “After 9/11, the construction and architecture business was headed in the wrong direction. At that same time, there was a revolution beginning in the oil and gas space—unconventional development. I entered the college of business and chose petroleum land management as my major.”

Fitzpatrick now lives in Houston with his wife, Adrianna, and his son, Fletcher, as he serves as vice president of land with Pursuit Oil & Gas LLC.

“A handful of us spun out from a predecessor company in mid-2016 to form Pursuit to focus on the gas window of the Eagle Ford. Many peers in the industry probably had thought we lost our minds – while everyone else was looking to hit it big in building oil-weighted businesses, we were focused on natural gas. It was quite early on, but we understood the foundation that gas had as a fuel necessary to power the world – and as more and more people were looking to create cleaner businesses, gas would fill that gap. With LNG now a reality, it would open this cleaner burning fuel to the world. Pursuit has a very strong focus on subsurface, and we had a very targeted approach and search area in our leasing strategy.  We hit the ground running in late 2016 and over the course of a year I was responsible for the leasing efforts of 25k acres, which became the core of our business. Today we are producing right at 90 million cubic feet of gas, and we’ll drill eight more wells in 2021."

“A good leader in the oil and gas industry must have the ability to listen, communication skills and maintain relationships, among many other things. In a world where it seems like many industries and sectors are moving closer to a consistent virtual work environment, and most communication is done with texting or emailing, I believe the oil and gas industry will be one of the last strongholds of direct interaction being extremely important. Finance need to understand what the reservoir engineers are doing, operations needs to understand what land is doing, midstream and marketing should know what finance is doing; all of these functions are related and must fit together in this complex thing we do. If a leader does not listen and effectively communicate, then a company is not going to operate smoothly, and in what we do that may mean whether or not someone is going home in the same condition in which they showed up to work.

We are a small company – only 14 employees – and we wear a lot of hats. I must take a ‘lead-by-doing’ mentality, because there’s just too much to do and too many deadlines to just stand back and lead from a distance. People have to be flexible, because the above situation is not the case for all. At a larger company, which I’ve worked at a few, managing the people and making sure your subordinates and others are accomplishing the goals is more of a priority. I have worked across the spectrum and I’ve had to adapt to the situation and be flexible considering the circumstances."

“We will do our part and more to continue to lower GHG (greenhouse-gas) emissions and better develop carbon capture technologies, but the fact of the matter is that China and India and other developing nations must also do their part. They are way behind the US and Europe as far as timing goes, but they would need to be held to the same standard as the United States to meet worldwide goals. This is more of a public policy issue, but it is something the common person should better understand.

The Wild West early days of shale development is past us. Fortunes were made and fortunes were lost, but one thing is for sure that we are all going to be much more disciplined going forward. Everything we do is highly scrutinized."

“Speak up. If you feel like you want or need to say something, make sure your voice is heard. Stand up for what you believe in.

Be flexible and ready to adapt. Not every role or responsibility will be exactly what you want, but learn from everything you do and it will benefit you one way or another. Our industry is obviously evolving and you never know what’s around the next corner.

[Care for your] mental/physical health.  Push the reset button – it’s important to step away every once in a while to clear your thoughts – that’s when some of the best ideas actually come. It is easy to keep your head down, especially early in your career. Everyone needs to maintain a healthy work-life balance and be sure to mentally and physically take care of yourself." 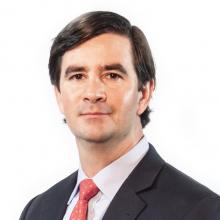