Growing up in Midland, Texas, it would seem like an obvious plan to go into the oil and gas industry. However, Collin McLelland didn’t decide to get involved until he graduated high school in the middle of an economic downturn. After learning about the industry from the ground up, he co-founded his own energy technology media company, Digital Wildcatters.

“When we first started Digital Wildcatters, I heard rumors from people saying that we were wet behind the ears for thinking we could change the industry—we’ve proved them wrong,” he said. “The movement is only growing. Tomorrow’s leaders and innovators will come for the wildcatters’ community.”

He has since moved from Midland to Houston to develop his media company. He lives there with his wife and three children.

Emerging from a recession

“I grew up in Midland, Texas, so entering the oil and gas industry was pretty natural. Interestingly enough, I didn’t really know much about the oil industry while I was in high school, but I’ve always been an entrepreneur, so I knew going to college wasn’t the path for me. I graduated high school in 2008, so it was right in the middle of the downturn and right before shale kicked off. I remember being at the gym as a 19-year-old and running into one of my friends; he had just got a job roughnecking and was telling me about how much money he was making. That’s all I needed to hear, and I was out on a rig roughnecking soon after that, learning the oil business from the ground up.”

“The professional achievement I’m most proud of is quitting my job to pursue my own ventures. The risk was extremely high, I didn’t have any plan, income or funding, and there was a massive opportunity cost as well. It was extremely tough for me and my family, so that is something that I will always be proud that we endured.

I’m also really proud that we bootstrapped Digital Wildcatters through 2020. COVID-19 crushed the media industry and the oil industry. So if you are a media company in oil and gas, you didn’t have a good time. We had a lot of grit to knuckle down and made it through when most couldn’t.”

“First, I think the oil and gas industry has historically had poor leadership as a whole, so it’s not necessarily the industry I look to as the guiding star on the subject. The most important traits of a good leader are accountability and ownership. When something goes wrong, it is no one’s fault but your own; when something goes right, that’s a result of your team, not you as an individual. I have seen many layoffs in the oil and gas industry, but I have never personally seen a message from leadership at these companies saying, ‘We came up short and failed you, this is nobody’s fault but our own.’ True leaders assume all responsibility and let it be known. This industry needs a lot more of it.

The most important thing I can do to lead my team is to enable them with the power to make decisions. So many people micromanage their teams and this kills growth. How could you possibly grow as a company if all decisions have to flow up to management? It suppresses creativity and initiative from the team; no one will come up with good ideas or even care to execute on them. The key is to surround yourself with smart people and trust them to execute.

My time on a drilling rig showed me what not to do as a leader—I think that’s as important as learning what to do. Coming up the ranks on a rig, you’re yelled at, people are demeaning, etc. So when I started getting people under me, I thought those same tactics were the best way to get people to engage, and I was very wrong. I started realizing that there were a lot better ways to lead a team, despite what I saw around me.”

“I believe there is a lot more value in having a group of peers on the same level as you. I learn a lot more from those people. I’m very fortunate to have a close circle of founders that are building amazing companies that can relate to the struggles that I’m going through.

[Young industry members] look at the world differently than any other generation. If you’re 30-40 years old, we grew up in such a fascinating point of time where we remember life pre-internet, but we grew up the majority of our lives using tech and seeing huge innovations such as the iPhone, social media, blockchain, etc. Technology is intuitive to us and that will change the way the energy industry operates.”

“I think there is so much opportunity in the industry over the next couple of decades. It’s out of favor, which drives out the competition. Regardless of what people think or believe, it’s very possible to build great businesses in contracting industries, so I’m expecting to see a lot of success stories despite overall headlines.

I also think there are a lot of exciting things happening at the intersection of tech and oil and gas. Whether it’s methane mitigation and carbon capture to make the industry more eco-friendly or bitcoin mining on natural gas sites to unlock value from the reservoir. I get really excited about those things.” 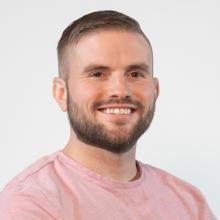