From an early age, Boone Bajgier knew he wanted to be part of the oil and gas industry. Influenced by his father, whom he considers his greatest role model and mentor, Bajgier set out to follow in his father’s footsteps in the petroleum engineering path until he was able to forge his own road. At 31, Bajgier is now manager of production engineering and well operations with Advance Energy Partners.

“Ultimately, there is one person who is and has been my mentor—my dad,” he said. “He has always been an encouraging voice through the thick and thin of both work and life. I’ve watched him navigate his home life through some extreme circumstances and still have time to develop a Godly perspective at work.”

Now Bajgier continues his work in Houston alongside his wife, Rebecca, and their two children, Joshua and Grace.

“From a young age, I was exposed to the oil and gas industry through my dad and his work. He steered me in the direction of petroleum engineering, and that became a natural course to follow. Blessed with the SPE-GCS scholarship, I experienced the oil and gas industry for myself through an internship right out of high school and haven’t looked back since.”

“I would have to say that I’m most proud of the operations team that we’ve assembled here at Advance Energy Partners. When I started, we had a very small field staff and few processes in place. Since then, we’ve grown into a full-fledged operations team complete with HSE and regulatory standards, alongside the focus to minimize downtime and increase production. A good field culture has been the priority to drive ownership to the operator to manage the business as though it was their own.

I did not expect to be a manager this early in my career. I’m very blessed to have been in situations where I had the ability to serve other people in the office and in the field. Having worked most of my career in field operations, I’ve been able to be a part of the process to develop a field culture that is focused on all the right things. I would say that the most influential piece has been learning from managers throughout my career and keeping track of what was successful and why.”

Qualities of a leader

“Vision, integrity, courage and communication. Without vision, you can’t see where you’re going. In our industry especially, a vision is paramount to building a culture of honor and establishing milestones to move forward. I’ve heard integrity defined as doing what is right even when no one is watching. A leader with integrity has a developed character forged in trials that can withstand any experience. This is where courage is necessary—to go against the grain and stand up for what you believe is right. Finally, a good leader must have a commanding ability to communicate the vision and expectations so that others are influenced in a positive capacity.”

“Starting at a larger company like Anadarko, I learned the basics of production engineering and operations in two assets. There were a lot of systems and support staff managing systems like production reporting, measurement, automation and optimization. When I moved to Advance Energy Partners, I gained an appreciation of those systems and processes. It was a tremendous challenge to define a vision for these processes and execute that vision to serve the immediate needs of the company while keeping in mind the long-term growth potential. We leveraged vendors and others’ experiences to define the vision first, and slowly but surely executed that vision into an efficient and scalable process that continues to add value to our business.”

“Energy fuels the ever-developing world, and oil and gas is still the primary catalyst to fuel that demand. I think it’s pretty cool that I have the opportunity to add value to people’s lives at work while also adding value to other people’s lives through producing oil and gas more efficiently. Having a purpose is the best way to stay motivated and passionate about work.

Through the technology boom, it seems the time between generations is getting shorter and shorter. Younger industry members have different perspectives on technology because of the era they grew up in. I think we’re seeing this in data-driven decisions and data analytics right now. In the future, this has potential to continue to be powerful in adding value to various organizations. There are also quite a few smaller technology companies that are trying to bring the industry current through technology in various capacities. These are just some of the great examples that show the unique perspectives of the younger generations within the industry.”

“First, the industry must embrace and adjust to the technology-driven world we live in. There’s a lot to be gained in communication and efficiency by leveraging technology. Second, we must learn from those who pioneered ahead of us. What we do faster, better and more efficiently today was paved by those who had to be courageous in building the paths we follow. Third and finally, we must learn to be flexible. The world is ever-changing, but there is nothing new under the sun-history has a way of repeating itself.

We must learn from the past in order to build a better future for the next generations. And especially today, the present will quickly become the past.

I couldn’t have dreamed of a better path than I’ve walked thus far. It’s important to set your course and not be dissuaded from it but equally important to watch for opportunities that may take you places you couldn’t imagine. Truthfully, I’ve learned the best leaders are servants who understand influence and authority. I’ve always loved being a part of a high-functioning team and hope to have the opportunity to lead a team like this. In the long term, I hope to build and leave a legacy for others to carry on. I want to leave an example more than a career.” 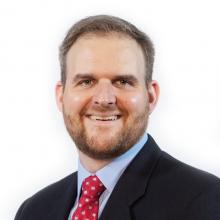