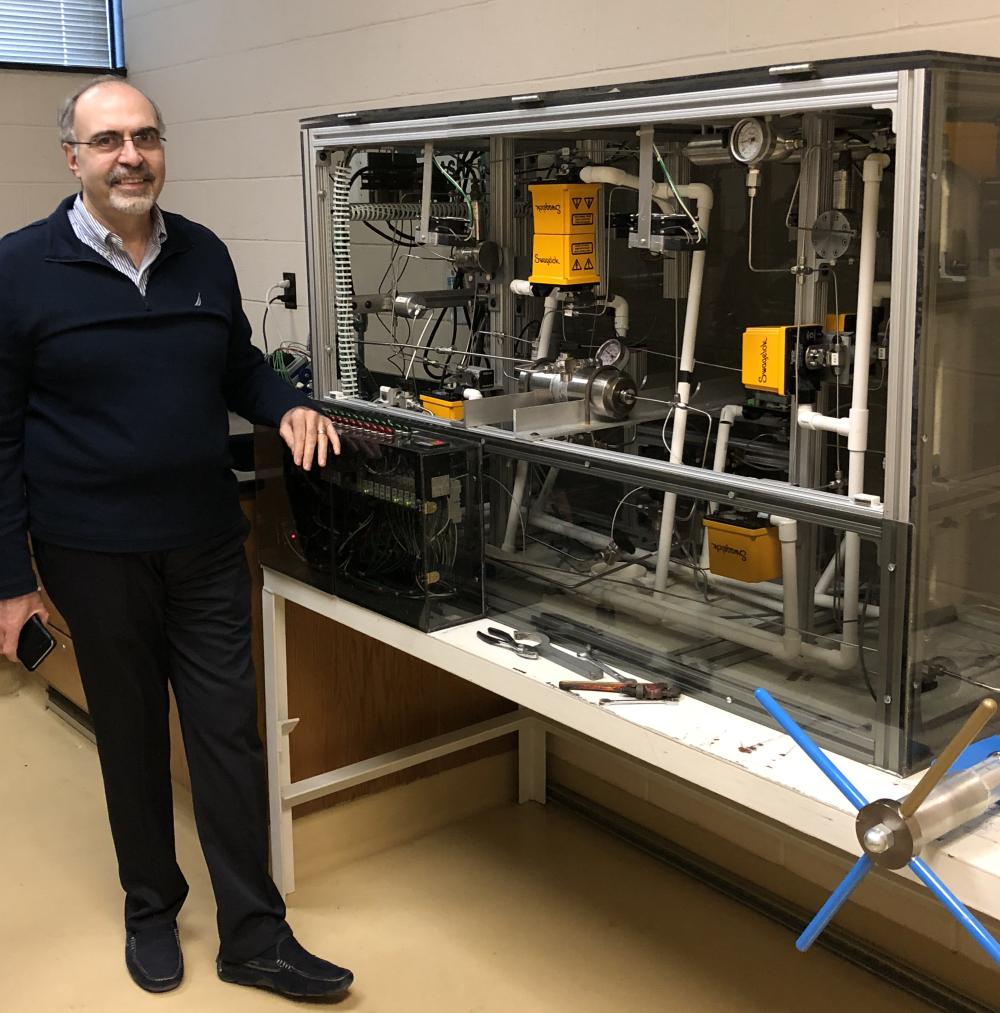 MORGANTOWN, W. Va.—West Virginia University (WVU) is one of many universities that are digging into shale research labs as part of their course curriculum within their petroleum and natural gas engineering programs. Because of special funding and support from the energy industry and government agencies, these future engineers are able to actively receive a head start on their site work.

During a recent tour of WVU’s petroleum and natural gas engineering department, Professor Kashy Aminian of the Benjamin M. Statler College of Engineering and Mineral Resources shared several working labs where energy companies and alumni have provided financial support and equipment to simulate various operations of the natural gas industry.

In 2017, Dominion Energy donated more than $150,000 in meters and regulators to WVU. The engineering department conducted a special ceremony naming the state-of-the-art lab as the “Dominion Energy Natural Gas Measurement Laboratory.”

One of the most interesting shale technology labs that Aminian highlighted during the tour was a shale lab called the Precision Petrophysical Analysis Laboratory (PPAL). He demonstrated that the lab has measurable capabilities of determining; permeability (nano-darcy range), pore volume (0.1% accuracy), absolute permeability (gas pressure correction), impact of stress (reservoir conditions), impact of adsorption and pore structure characterization.

Aminian is also a specialized consultant in the oil and gas industry who consults energy companies on how to “predict production” so they may increase on their return on investments. With a research grant from the U.S. Department of Energy National Energy Technology Laboratory (NETL), the PPAL will be advantageous for natural gas companies at their E&P divisions.

The PPAL was inspired by CORAL (Computer Operated Rock Analysis Laboratory) designed at the Institute of Gas Technology (IGT) in the early 1980s to measure tight sandstone permeability and porosity. PPAL has been designed and assembled for fast and robust measurement of the shale petrophysical properties including porosity, permeability, compressibility, and sorption parameters. PPAL measurements provide more accurate and repeatable results in faster than commonly used techniques which often have a large margin of uncertainty as a result of inconsistent experimental protocols and the complex interpretations methods. PPAL measurements are performed under steady-state isothermal flow conditions which do not require complicated interpretations. The key advantage of the PPAL is the capability to measure the permeability and porosity of the core plugs under a wide range of confining and pore pressures. In addition, the impact of gas adsorption (or desorption) on the measurements can be monitored.

How is this research relevant to the Marcellus and Utica Shale industry?

“Primarily, the key in evaluation of any project is the prediction of the production which will depend on the properties of the reservoir rock,” Aminian said. “Then, based on that information, the economic benefits of the project can be determined.

“So, if you can determine the permeability and porosity accurately…it will help you make a better prediction,” he continued. “ Also, being able to account for the impact of stress on production can be very significant. You could be overestimating your production if you are not accounting for those facts. We are trying to show how this could be implemented to understand two aspects. One is scientific to see what phenomenon is actually taking place in the reservoir. Second, taking that information and turning this data into predicting the production which will also lead to financial benefits of the projects.”

Aminian frequently mentioned the lab’s high standards for accuracy for shale permeability and testing and its impact on production. For example, the PPAL’s current technology is more accurate on gas slippage than prior testing done with the traditional Klinkenberg Analysis.

He said that one of the key differences between the conventional formations like sandstone and shale formations is the sizes of the pores. When average pore sizes are smaller than 10 nm, which is typical for shale, the Klinkenberg correction is no longer valid.

“Theoretically, it had been proposed that the absolute permeability can be determined by plotting the gas permeability versus the reciprocal of the square of mean pore pressure. Our measurements on Marcellus shale core plugs proved this theory,” he added.

“There are two key issues with the GRI method. First, there is no standard protocol to perform the experiments. Therefore, the results provided by different laboratories for the same sample can be orders of magnitude apart,” he said. “Second and more importantly, the measurements cannot be performed under the reservoir stress conditions. Shale is very sensitive to the stress and the measured permeability under ambient conditions can significantly differ from the permeability value in the reservoir.”

During the phases of research and development, there are usually challenges that occur during the process. Some challenges could include getting funders to participate, assembling research staff and applying consistent testing methods and environments.

Aminian shared some of the challenges that his team encountered during R&D and how they overcame them.

“One of our first challenges was to ensure there were no leaks in the system. Even minute leaks can significantly impact the results because we are dealing with very small volumes,” he said. “This required pressure testing the system, and if a leak was observed, each part was isolated and tested. Since minute leaks are hard to detect, we have to keep the system under pressure, sometimes for 7 to 10 days to ensure no leak is present."

“The second challenge was to obtain Marcellus shale core samples and to prepare the core plugs,” he continued. “Fortunately, Marcellus Shale Energy and Environment Laboratory (MSEEL) was initiated by WVU and OSU in 2015 and was funded by NETL. MSEEL provided us with a number of core plugs to perform the measurements. However for us to continue our research, we need sponsors who can provide with financial support as well as shale samples.”

Now that PPAL research is complete, Aminian and his team have presented and published the results at various SPE conferences and other meetings. He said they have been also in discussion with industry partners. “However, the recent downturn in gas prices has made it difficult to progress,” he said.

From Oil and Gas Investor Editor-in-Chief: The Bear Case Privates

As public E&Ps promise capital discipline and slow or no growth through 2021, an unexpected and potentially price-busting trend is developing behind the scenes. Could private oil and gas producers ruin it for everyone?