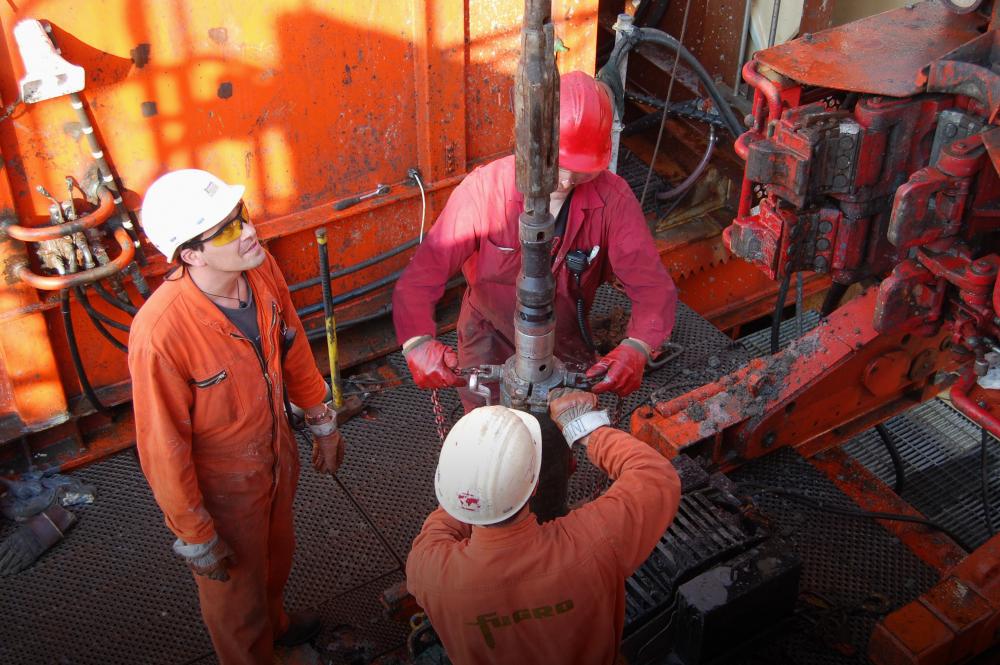 [Editor's note: This story appears in the June 2020 edition of E&P. Subscribe to the magazine here. It was originally published June 1, 2020.]

Even though the natural gas market is not currently affected by supply insecurity, research into natural gas hydrates as a potential resource is still active. Methane hydrate resource potential is immense, and the world’s press took notice of the successful short-term marine gas hydrate production tests in 2017 off the east coast of Japan and in the South China Sea. What has international methane hydrate research achieved so far? What is the relationship between gas hydrate and large conventional biogenic gas deposits? And what is the time line for devel­oping methane hydrate as a natural gas resource?

What is methane hydrate?

Gas hydrates are a solid form of light hydrocarbon gases and water. Methane hydrate is a dense energy source of natural gas and therefore sometimes referred to as “nature’s LNG.” Gas hydrates, which resemble ice, are part of the natural hydrocarbon migration system and an integral component of the Arctic petroleum system, where it is cold enough for gas hydrates to form. They are also widespread in deep water on con­tinental margins, where pressures are high enough for gas hydrates to form. Gas hydrates are not always useful: a robust billion-dollar business controls gas hydrate formation in deepwater pipelines and subsea production facilities because they can restrict and plug the flow of hydrocarbons.

Serious research to develop natural gas hydrates as a resource started in Japan in the early 2000s, followed by India and Korea. At the same time, the U.S. began a multiagency research effort led by its Department of Energy (DOE), and China has fielded six major field programs in the last 14 years to confirm gas hydrate deposits in the South China Sea. Advances to date include reservoir characterization, including confirmation of direct detec­tion of high-saturation gas hydrates in offshore sand deposits, production technologies and reservoir production simulators. The consensus so far is that conventional oil and gas production equipment and technologies can be modified to produce gas hydrates. Gas hydrates, unlike conventional hydro­carbons, will not flow freely between the reservoir and wellhead by pressure differences. Changing the gas hydrate into gas and water requires active depressurization through pumping, as demonstrated in the short-term Arctic and marine production tests. Thermal and chemical means to dissociate gas hydrate are only likely to be employed for flow assurance and production sys­tem control.

The elements of a petroleum system (source rock, expulsion and migration to reservoir) are the fundamental con­cepts of oil and gas exploration. If gas hydrates are mentioned in the oil and gas exploration context, they are often described as possible indicators of secondary and tertiary migration from the object of exploration (deep ther­mogenic hydrocarbon reservoirs). So far, gas hydrate field expeditions have confirmed thermogenic gas hydrate, but these are best described as having mixed thermogenic and biogenic iso­topic signatures. Most gas hydrates, however, are associated not with ther­mogenic gas migration, which is a by-product of thermal cracking of ker­ogen within much older sedimentary rocks, but with biogenic gas systems, in which methane is a by-product of the bacterial activity involved in CO2 reduc­tion in very young sediments during their burial.

Gas hydrates are intimately related to the processes of how biogenic gas basins generate and preserve economic quantities of natural gas. The window for biogenic gas generation is in the compaction and dewatering phase of the sediments within the upper 2 km of burial. After oxygen and sulfates are depleted during initial burial, the controlling parameters for biogenic gas production are temperature, organic matter and space. In biogenic gas sys­tems, methanogenic bacteria feed on labile organic matter in the pore space until the sediments compact too much or it becomes too hot for the bacteria to be there.

Large gas hydrate deposits in India’s Krishna Godavari Basin were direct-detected from seismic response, and pressure cores confirmed there was a tight lithologic seal directly over the gas-hydrate-filled sand. In contrast, the same sand in a step-out, also near the base of gas hydrate stability and subject to the same vertical methane migration, was not saturated with gas hydrate. The difference between the two locations was the absence of the sealing facies where the sand was water saturated.

The ability of gas hydrates to help concentrate and preserve biogenic gas is likely an import­ant mechanism for the preser­vation of biogenic gas deposits. Escaping gassy fluids from the methane generation window can be available for capture within the gas hydrate stability field, but the overall migration will happen in the dissolved phase and would, without local seals, escape the system.

Hoteling of biogenic gas as gas hydrate as a mecha­nism for free gas concentration mechanism has been proposed for Camden Hills in Mississippi Canyon 348 in the Gulf of Mexico and at the multi-Tcf Shwe gas field offshore Myanmar. Recycling of gas hydrates at the base of gas hydrate stability due to rapid sedimentation and burial could be an important mechanism to under­stand large conventional biogenic gas resources and the associated gas hydrates above them. As these large biogenic gas plays become sanctioned for development, the exploration companies should consider setting targets for developing the secondary gas hydrate that remains and may be in reach.

Preparations for a long-term production test, a joint project of the U.S. DOE and the Japan Oil, Gas and Metals National Corp., are well underway on the Alaskan North Slope, where a strati­graphic and monitoring well was drilled in December 2018 in the Prudhoe Bay Unit along the Eileen gas hydrate trend.