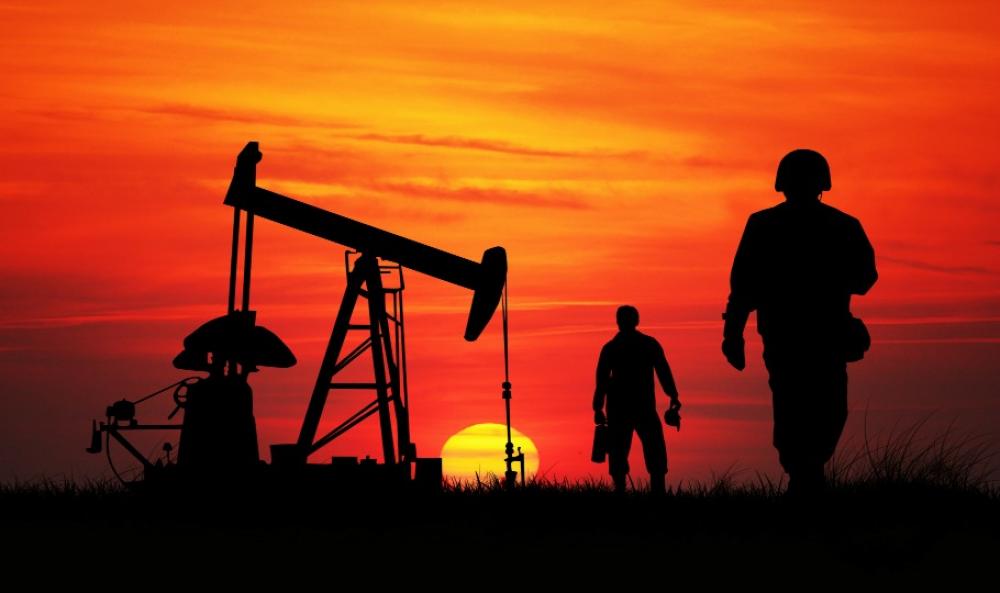 NEW ORLEANS — Oil and gas are generating the best bad news any industry could hope for. Plummeting rig counts? Severe cuts to capital spending? Service company layoffs exceeding the population of rural Texas towns? A parade of oil and gas executives shrugged it all aside at the Scotia Howard Weil conference as they outlined how their companies’ production was heading higher in 2015.

Operators talked up plans to generate production volume growth by high grading prospects, drilling only the very best acreage and getting more production per well, usually through more intensive proppant loading and closer spacing between laterals to better drain a reservoir’s sweet spot. Operators are aggressively exploiting neighboring zones above and below traditional formation targets for added productivity as plays such as the Eagle Ford and Bakken are morphing into nuanced stacked opportunities beyond just upper and lower members of the name formation.

Opportunities for production volume growth also stem from the ability to lower well costs from a reduction in service pricing. Since the first of the year operators have recognized 10% to 15% reductions in well costs, which is a little less than anticipated in a plummeting rig count, though most operators expect that number to rise to 25% or more by year end. Consequently, breakeven prices continue to fall for sweet spot oil production, in some cases generating internal rates of return (IRR) above 25% in the Permian Basin and Cana Woodford, even at $30 oil.

“In our western Eagle Ford acreage, we did a look back and our returns today, using current well costs and current well productivity, are better at a $65 oil price than they were when we had a $95 oil price just several years ago,” Thomas said. “And we’re doing this in every one of our plays. Basically we’re driving well costs down and improving productivity of wells at the same time, so the returns are getting better.”

EOG is cutting 2015 capital spending by 40% compared with 2014, but still expects to ramp up activity in the final quarter of 2015. Thomas said his company can generate double-digit growth at $65 oil. To position itself for recovery, EOG plans to step outside its traditional emphasis on self-sourced organic growth.

“We’ll be looking at farm-ins, drill-to-earn opportunities,” Thomas said. “Those always come up for EOG, a preferred operator to help folks out. We’ll look at tactical acquisitions, bolt-on acquisitions, in some of our core areas. Those are easier this year.”

John Richels, Devon Energy Corp.’s (NYSE: DVN) CEO, outlined a practical program to slow the rate of base decline while focusing on developmental drilling in the company’s best acreage.

“It begins with maximizing our base production and capturing the full value of every barrel,” Richels said. “Every year, we have a decline rate that is probably in the 20% range. Every year we spend 4, 5 or 6 billion dollars to make that up and add some growth to it. So 80% of our production still comes from the base. If we can maximize that base and stave off declines. If you knock a couple percent off that decline rate, it’s an enormous difference.”

Devon has embraced automation across its portfolio, monitoring existing wells through centralized decision support centers that can tell immediately if a well is experiencing production issues. Devon’s central support center concept, which has been common for offshore operators, now extends to the drilling and completion process.

“We monitor all our wells centrally to see how they are being drilled,” Richels said. “We see that they are in zone, not porpoising or doing the things that detract from the returns on the wells. We are really focusing our activity on development drilling in the best parts of the play and having a great deal of success reducing our service costs as well.”

Marathon Oil Co.'s (NYSE: MRO) CEO, Lee Tillman, highlighted a $225 million reduction in service costs on its domestic properties in the Eagle Ford, Bakken and Oklahoma resource plays since January 2015. Those reductions have shaved $1 million from single-well cost in the Bakken and up to $1.3 million elsewhere.

Despite the reductions, high-intensity completions have generated significant uplifts as measured by IPs, including a 30% uplift in the Bakken.

“As we look to offset the impact pricing, we have three levers that are generating economic advantage,” Tillman said. “First, enhanced well performance, such as that provided from high-intensity completions. Second, high grading of our inventory for investment selectivity, and finally capturing service cost reductions early in the commodity price cycle.”

The company is reducing rig count domestically from 33 in fourth-quarter 2014 to 14 by the end of second-quarter 2015 on reduced capital spending of $3.5 billion, a majority of which will be allocated to unconventional plays in the U.S., Tillman said. Marathon stress-tested its domestic acreage over a theoretical five-year drilling program and found the company could earn the cost of capital on single-well economics for 70% of its wells at $50 WTI, even before service cost reductions, and generate decent returns for 90% of its acreage at $70 oil. 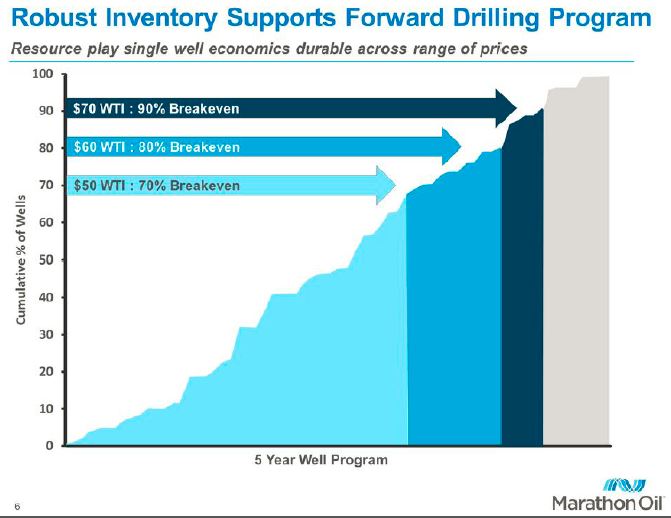 A stress test of Marathon Oil Company’s domestic properties show 70% of its wells break even at $50 WTI. The company is high-grading its domestic spending toward the very bests wells in its portfolio. Source: Marathon Oil

Enhanced completions, which operators are now calling high-intensity completions, use increased proppant loading per linear foot of lateral. The new name has become a major buzz phrase and was heard in abundance during first-day presentations at Scotia Howard Weil. The process, coupled with high grading acreage, has become a necessity for navigating the low commodity price environment for technically astute oil and gas firms.

In fact, $50 oil is a brave new world and oil and gas firms will differentiate themselves on their technical ability to navigate a way forward.

“As we look ahead we are entering into a changed landscape,” Cimarex Energy Inc.’s (NYSE: XEC) CEO, Tom Jordan, told attendees. “There is a reset and a new normal. I think organizations are going to be challenged in a way that will differentiate us. For you on the outside looking at companies, you will have the opportunity to see the excellent distinguish themselves from the also-rans. The good is not going to be good enough.”

Cimarex has experienced economic and technical success in its northern Delaware Basin acreage through the use of enhanced completions on additional stages, extended lateral length and greater proppant loading, which the company outlined at Howard Weil in 2014. Since then, the company has exported what it has learned in the Permian Basin to its Cana Woodford play in the Anadarko Basin. 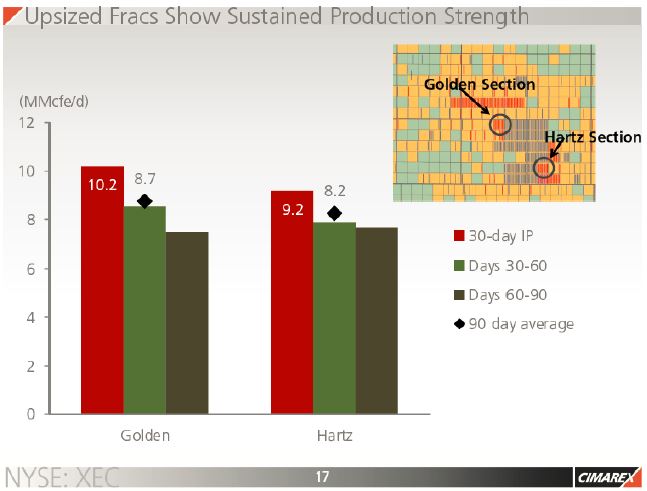 For more information, contact the author, Richard Mason, at rmason@hartenergy.com. 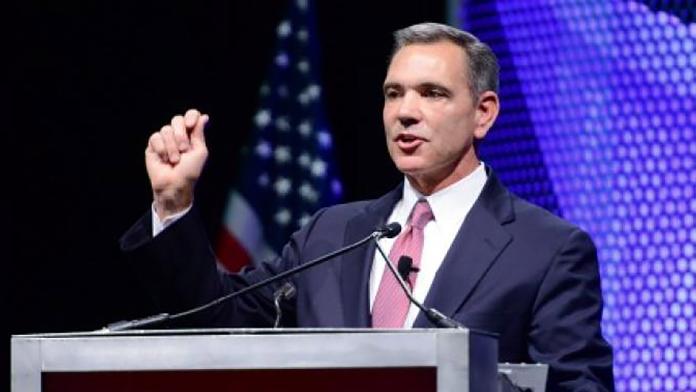 The company is adjusting to the changing midstream landscape by focusing on its core competencies. 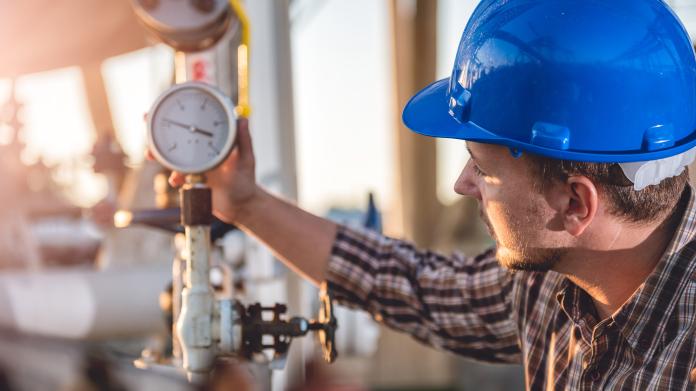