In the week since our last edition of What’s Affecting Oil Prices, Brent rose $2.97/bbl to average $81.77/bbl last week as markets responded very poorly to the news that OPEC had no firm plan for raising production. WTI also rose, increasing $1.65/bbl to average $72.57/bbl. Given media commentary around prices potentially hitting $100/bbl and elevated net long positioning, we expect prices to continue rising this week, potentially touching $85/bbl. News that a trilateral NAFTA agreement has been reached will remove some concerns around future demand.

While prices do warrant some support, $100/bbl is not fundamentally supported. The argument could be made that even a move to $85/bbl is predicated more on sentiment than on current physical balances. This does not mean that a move to $85/bbl will not happen, but that any spikes are likely to be short-lived and prices should moderate through the end of the year. Margins have weakened significantly in recent weeks on higher crude prices and refiners will likely begin to reduce runs in advance of the seasonally slower winter season. 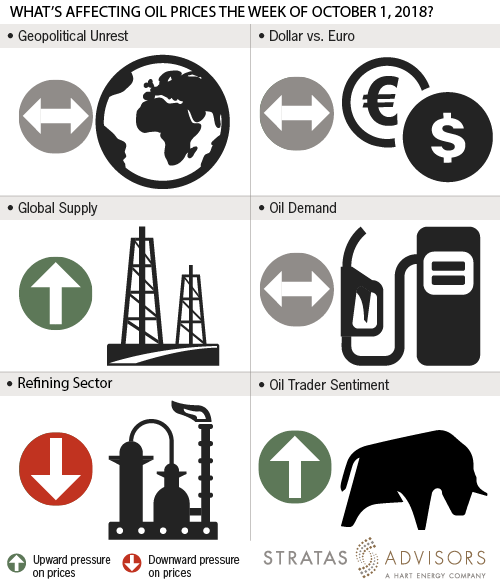 Halliburton Co. has been awarded a contract from Kuwait Oil Company (KOC) on Feb. 3 to collaborate on their digital transformation journey through the maintenance and expansion of digital solutions for their North Kuwait asset.